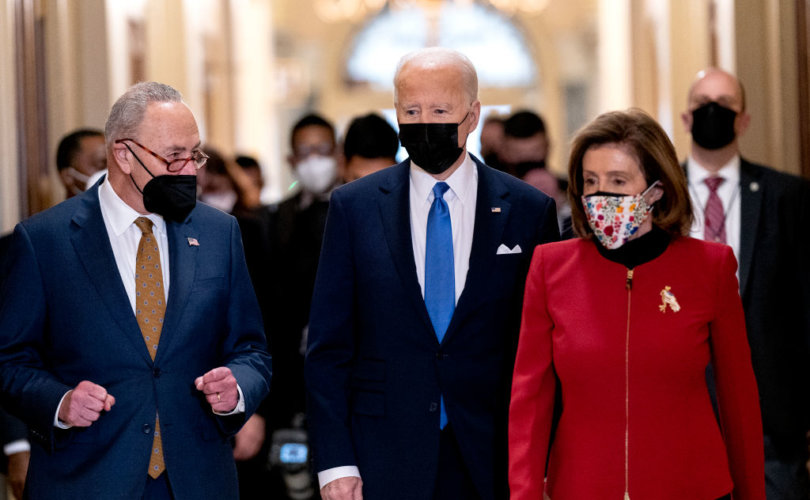 (WND News Center) — Horrified by what has been called the Sovietization of the Biden administration – including the shocking criminalization of dissent and the weaponization of the FBI, whose agents daily arrest, intimidate and persecute the regime’s political opponents – tens of millions of Americans anxiously wonder whether November’s midterm elections will bring any positive change of direction for a once-great nation now careening toward total destruction.

Although many voices are weighing in on “what’s at stake” in the midterms, ironically no one has expressed it more clearly or forcefully than Joe Biden himself, in his astonishingly dark Sept. 1 “Soul of the Nation” speech, delivered while bathed in ominous red lights and flanked by Marine guards.

Of course, the key to de-coding Biden’s dire warnings about the “greatest threats to America” is to understand that he was engaging in a mirror-perfect case of political projection: Every single evil that Biden ascribed to “MAGA Republicans” – the Left’s new name for America’s vast center-right middle class, literally the nation’s backbone – is actually true of today’s Democratic Party and its unhinged supporters.

Consider just a few highlights from Biden’s Orwellian speech, in which he describes half of Republicans as “semi-fascists.” Upon reading each statement, it becomes crystal clear which camp Biden’s words truly describe – his own. Biden said:

Again, by just substituting “Radical Democrats” for “MAGA Republicans,” one gains a vivid and stunningly accurate description of the ever-growing neo-communist threat to America.

But what is at the root of the Democrats’ maniacal daily exercises in projection? Or to expand the question exponentially: Why does evil always claim to be good and moral, or at least rational and logical, while claiming good is evil? (The biblical prophet Isaiah weighed in on this when he wrote, “Woe unto them that call evil good, and good evil; that put darkness for light, and light for darkness; that put bitter for sweet, and sweet for bitter!”)

What’s at work here is not just the common human pathology that psychologists call projection – i.e., attributing one’s own unacceptable qualities and actions to another person or group. It’s also a cynical, vicious, cold-blooded political tactic: Projection is extremely effective as a weapon of protracted political warfare. It is, in fact, the essence of virtually everything today’s Democratic Party leaders and their media apologists say from morning to night.

But delving deeper still, all of this is rooted in the fact that today’s Democratic Party is, in a very real sense, “possessed” – that is, its political and thought leaders have been completely taken over by the kind of dark psychological and spiritual forces that readily capture the minds of corrupted human beings who have turned their backs on God and His laws of life. These exact same forces have animated history’s most destructive, cult-like political movements, most obviously communism/Marxism/socialism, which has been metastasizing around the world for the past century – and now has its sights set on America.

Yet even such controversial ideological labels are, themselves, essentially lies intended to create a moral façade that either covers up or justifies deeply inhuman and criminal behavior. That is, the ideological labels are just an attempt to sell the notion that, whether or not one agrees with their ideology, “communists,” “socialists” and “Marxists” – and “Antifa” (short for “anti-fascist”), “Black Lives Matter” and today’s “Democratic Party” – still somehow have the interests of others at heart.

It’s a lie. We’re talking about sociopaths, people without a functioning conscience. Deeply corrupt people like Joe Biden, Barack Obama, Hillary Clinton, Nancy Pelosi, Chuck Schumer, Adam Schiff and their ilk do not possess the capacity to actually care about anyone else, any more than a drug addict has the capacity to unselfishly care about others. And these ruling elites are addicted to the most powerful and addictive drug of all: POWER.

In a word, they are hell-bent on being gods.

They have contempt for the “little people” they pretend to champion, those decent, long-suffering and conscience-driven folks who work hard, marry, raise families, pay their taxes, defend their country with their lives, and willingly do their part to preserve and perpetuate the greatest nation in history, which they love: America.

What’s being described here is a deeply compromised and corrupt class of people, possessed and controlled by dark spiritual “powers and principalities” about which they know nothing, and care less. Whatever their professed religion, they are mockers of God, the same sort of people who self-righteously expanded communism over so much of the world and made the 20th century the bloodiest and deadliest in all of human history. Today, they’re laser-focused on the biggest prize of all: The United States of America.

Fortunately, even though America is being likened increasingly to a third-world or communist dictatorship – not just because its current rulers crush and punish dissent, but because of their heedless monetary inflation, trashing of the nation’s Constitution and continual threats to destroy and corrupt key American institutions from the Supreme Court to the electoral college – there is still one thing America retains, one saving grace, one sacred institution that one-party dictatorships from Zimbabwe to communist China do not have.

America still has real elections. And in truth, there is no reason the tens of millions of decent, right-thinking American voters cannot slow down, if not entirely halt, the Biden administration’s nonstop madness in November’s midterm elections just a few weeks from now.

I know what you’re thinking: Of course the Democratic Party will try to steal the election – that’s what they do – through every manner of election fraud, abuse and corruption for which their party is famous, not to mention Biden’s mysterious executive order mandating every department of the federal government to essentially serve as a Democrat get-out-the-vote machine.

Therefore, one final word to Christians, who still constitute the vast majority of Americans and potential voters: Every election cycle, tens of millions of American Christians do not vote!

How is that even possible, one wonders, considering that so much of what Democrats are pushing right now – from congressionally “codifying Roe” so that throughout America abortion will again be legal up to the moment of birth – i.e., straight-up infanticide – to expanding the satanic craze of amputating body parts of multitudes of children tricked into believing they’re “transgender” – amounts to a grotesque frontal attack on everything Christians, indeed all decent people, consider sacred?

Here are the most common rationales cited by non-voting Christians: 1) Their particular church denomination tells them they are “citizens of heaven” or “not part of this world” and therefore don’t need to vote; 2) they’re so upset by government corruption they feel contaminated just reading and hearing about it; 3) they believe God will determine who leads America without their help; 4) they believe church and state should be “separate”; 5) they believe their focus should be the gospel, not politics; and finally, perhaps underlying all these reasons, 6) they’ve given up hope of any good ever coming out of Washington, regardless of who is elected. Indeed, many non-voters are so disillusioned by the lies and hypocrisy dominating politics that they have given up hope and walked away.

The Christian Broadcast Network (CBN) has reported that 15 million American Christians are not even registered to vote.

So listen up, Christian brothers and sisters: The history of Christianity is full of martyrs, believers who were burned alive, sawn in half or crucified to defend their faith, which they endured willingly, even gladly. Today, you are not being asked to endure torture and death, but rather, just to get in your car and drive to your polling place on Election Day and cast your ballot affirming good, and not the most abominable evils imaginable, so that your own children and grandchildren might inherit a safe and decent country in which to grow up, just as you did.