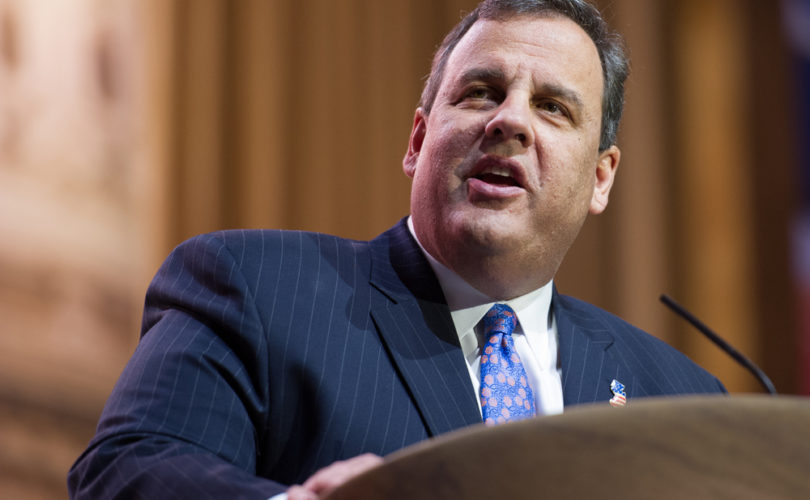 February 9, 2016 (LiveActionNews) — During Saturday night’s GOP debate, one question focused on the issue of abortion, as moderator Mary Katherine Ham acknowledged that most Millennials support restrictions on abortion.

But Chris Christie – who had earlier stated that he was pro-life for all life, including “when it’s a lot more complicated” – made an outrageous error. Christie’s pro-life bona fides have been questioned before, as years ago, he referenced a personal donation to Planned Parenthood. The New Jersey governor had seemed to possibly redeem himself with his bulldog approach to Planned Parenthood’s sale of baby body parts and his commitment to defund the abortion giant.

But during Saturday’s debate, Christie inexplicably called one form of abortion “self-defense.”

Christie attempted to explain his reason for supporting abortion in cases of rape and incest:

I believe that if a woman has been raped, that is a pregnancy that she should be able to terminate. If she is a victim of incest, this is not a woman’s choice, this is a woman being violated. The fact is that we have always believed, as has Ronald Reagan, that we have self defense for women who have been raped and impregnated because of it or been victims of incest and been impregnated for it. I believe that they do not have to deliver that child if they believe that is an act of self defense by terminating that pregnancy.

As a former prosecutor, Christie should be well-educated on the boundaries of self-defense, so this explanation is particularly puzzling coming from his mouth. Self-defense is used against a perpetrator, not against another innocent human being.

The backlash against Christie came hard and fast, as viewers were outraged by his suggestion that babies themselves are their mothers’ attackers.

I am still wincing over Christie's brutal description of when it's ok to kill your baby. Horrid. Horrid.

A woman has a right to self-defense against her rapist. We should kill or castrate rapists. Killing babies is wrong. End of story.

All human life is sacred – unless your life is the result of a tragic act of violence, and then you can be killed.- Bush & Christie

Apparently, Christie, the former prosecutor, doesn't know we don't execute children for the crimes of their fathers.

5/ By championing the killing of babies as “self defense” because of crimes of rapist father, @ChrisChristie abandoned prolife principle

“An act of self-defense in terminating that pregnancy.” A repugnant statement in every circumstance but when life of the mother is at stake

Shameful that @ChrisChristie would call the abortion of an innocent child “self-defense.” The child is blameless. #GOPDebate

There is NO self-defense against a baby. That's absurd and nasty. https://t.co/H8ljTIKIFT

Commenters defended babies who are conceived in rape. They insisted the lives of these children are no less valuable based on the circumstances of their conception – something entirely beyond their control.

@GovChristie what self-defense does an unborn baby conceived in rape or incest have? #GOPDebate #NotProLife @RebeccaKiesslin

I know someone who was conceived via rape. Her life is no less valuable than mine.

That was a disgusting answer from Christie.

Babies are babies. Period. Don't pile a murder on top of a traumatic experience. #GOPDebate

@JebBush @ChrisChristie Meet @RebeccaKiesslin she is brilliant, beautiful, & conceived in rape. Talk to her, she will save u from ur selves

That was a horrible, horrible answer from Christie.

The child conceived by rape has just as much right to life as any other.

Save the 1 is an organization dedicated to telling the stories of women who choose life for their children after rape and the stories of children who were conceived during rape. A 2 1/2 minute video about these wonderful people is available here and here.