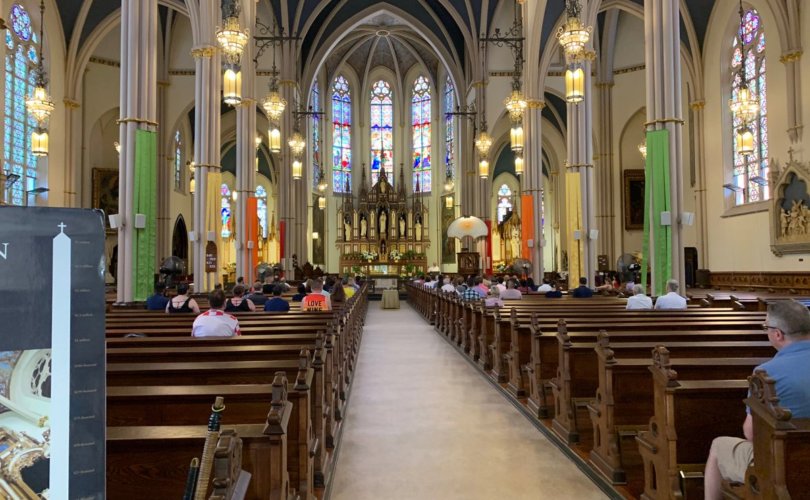 A 'Pride Mass' in New Jersey appears to be sparsely attended despite the organizer's claims.Twitter

July 4, 2019 (Catholic Culture) — “Pride Month” has come to an end. And for the first two days of July, the first readings at Mass told the story of Sodom and Gomorrah. I’d call that a coincidence — if I believed in coincidences.

Just after the middle of the month, Joseph Sciambra posted a very provocative comment on his Facebook page. Sciambra knows whereof he speaks; having once been caught up in the homosexual underworld, since experiencing a conversion he has made it his special mission to reach out to homosexuals, helping to heal their wounds. And they are wounded. The grotesque excesses on display at “Gay Pride” events are evidence that these people need help. Sciambra observes:

“But there is a far greater evil (than any 'Pride' Parade) that goes largely unchecked and mostly unchallenged in the Catholic Church: the ongoing problem of priests and prelates and their lay underlings who openly disseminate their own spin on LGBT propaganda. What makes their actions grossly evil — is that they do so in the name of God.”

Building on Sciambra’s argument, let me suggest that when Catholics complain about the “Pride” activists, they are aiming at the wrong target. Not because the complaints are unjustified — they are not — but because we have a more pressing problem on our hands. Before we lament what is happening on the city streets, let’s address what is happening in our own churches. We Catholics cannot restore sanity to society until we have restored integrity in our Church. We cannot continue fighting a two-front war.

In Hoboken, New Jersey, a Catholic parish capped the month with a “Pride Mass,” encouraging members of the congregation to join the parade in New York. In Lexington, Kentucky, Bishop John Stowe offered a “celebration of Pride” prayer card, featuring a crucifix bathed in rainbow-colored light. How can we expect to gain a hearing for Catholic moral teachings, when the Church issues such confusing messages?

Unfortunately, those examples in Hoboken and Lexington can no longer be considered exceptional. If you think your own diocese is free of such problems, you should probably think again. Are there one or two parishes that welcome and encourage LGBT activists? Has Father James Martin come to speak to a parish or college group? Are there gay-straight alliances in parochial schools? If so, then you should address that situation before you begin to worry about the secular activists. We must speak with clarity. We must show unity in support of Christian morality. We must display the integrity that comes only when we practice what we preach.

Liberal Catholics scoff at bishops and priests — yes, and internet pundits — who they dismiss as “culture warriors.” But that characterization begs the question. Is there a culture war going on: a battle for the soul of our society? If you answer that question with a No, I probably can’t convince you otherwise. But if you say Yes, then don’t criticize the “culture warrior” Catholics. On the contrary, you should criticize those who do not earn that sobriquet.

The battle is real, and the conflict is escalating. As a presidential candidate, just a bit more than a decade ago, Barack Obama opposed legal recognition of same-sex “marriage.” Today, that stand would disqualify him as a Democratic candidate. A decade ago, a frat boy might have earned guffaws from his classmates by suggesting (in jest) that biological men should have legal access to abortion; this year, a Democratic presidential hopeful made that point in all seriousness.

And while the sexual revolutionaries continue to rack up victories, the middle ground is shrinking. Anyone who dares to oppose the LGBT agenda is subject to public denunciation for “hate speech,” perhaps barred from social media, or even “doxed” and harassed at home.

“Things fall apart, the centre cannot hold,” wrote Yeats in what is probably his most-quoted line. Look down just a couple of lines in that poem (“The Second Coming”) and the Irish poet seems to be speaking of our own time:

The ceremony of innocence is drowned;
The best lack all conviction, while the worst
Are full of passionate intensity.

We adults will survive these culture wars, one way or another. But think of the children; think of “ceremony of innocence.” We owe it to our children to preserve their innocence, to preserve a culture in which they can find stability, serenity, and strength.

Do you want to know why I am a culture warrior? The Left will tell you that I’m consumed by fear. In a way, that is true. I am afraid that if I remain silent, I shall have no defense when I am asked, “What did you do during the culture wars, Grandpa?”

Don’t ask whether or not there is a war going on: a war for the soul of our society, a war for the integrity of our Church. There is. The right question to ask — first of yourself, then of your pastor and your bishop and your Catholic friends — is: Which side are you on?