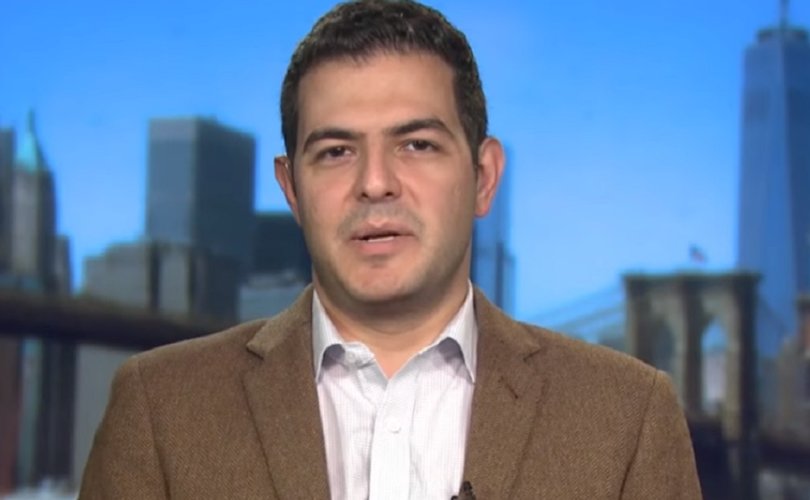 What’s got everyone so riled up? Ahmari recently suggested that the government should ban LGBT Drag Queen Story Hours at public libraries.

Ross Douthat, Rod Dreher, Matthew Schmitz, and Michael Brendan Dougherty are just some of the increasing number of right-of-center “thought leaders” commenting on Ahmari’s conversion. Countless other outlets, including many liberals, have published op-eds about it as well — Bloomberg, Vox, The Week, The Atlantic, the Washington Examiner, and Reason, to name a few.

Most establishment conservatives were left unpersuaded by Ahmari’s arguments in favor of wielding the power of the state to advance the common good. He’s a “theocrat,” whined one libertarian. Believing that the state can inculcate morality is “wishful thinking at best and dangerous in the worst case,” wrote a contributor to The Federalist. Others, more measured, still want to know what policies Ahmari has in mind.

Differences aside, all agree with Ross Douthat's contention that the thirty-something editor of the New York Post’s op-ed page has basically lit the fuse to the debate that will decide the future of conservatism in the United States.

Here’s what happened. On May 29, Ahmari announced his departure from “fusionist” conservatism in an essay for the increasingly anti-liberal website First Things. What that means is that he’s basically given up on the old alliance of neoconservatives, libertarians, and social conservatives and thrown his lot in with the emerging coalition of Trump-inspired economic nationalists, religious conservatives, and foreign policy realists and non-interventionists.

In his article, Ahmari took aim at National Review senior writer and Never Trumper David French, primarily because he’s opposed to the state disallowing Drag Queen Story Hours at public libraries. A seemingly fed up Ahmari threw up his hands and denounced the dogmatist view held by civil libertarians like French that says using the state as a tool is anathema.

Ahmari’s main, undeniable point is that French’s approach has failed to halt the advancement of the far left’s agenda and the degradation of America. Social conservatives should fight the culture wars “with the aim of defeating the enemy and enjoying the spoils in the form of a public square re-ordered to the common good and ultimately the Highest Good,” he writes.

Ahmari admits in his nerve-striking article that “government intervention will not be the answer to every social ill,” but, it is not necessary to have “a great horror of the state, of traditional authority and the use of the public power to advance the common good, including in the realm of public morality.”

Ahmari’s decision to support the more populist variant of conservative thought is no small matter. For one, he’s more or less a creature of the establishment. An up-and-coming commentator and bestselling author with bylines at The Wall Street Journal and the neoconservative Commentary, his rejection of the status quo likely made him a Benedict Arnold figure to many on the right.

But Ahmari gave warning signs he was heading in this direction. In February of this year, he signed on to a First Things declaration titled “Against the Dead Consensus.” Other, mostly young, conservative Catholic intellectuals added their names to it as well. Some of them have “integralist” tendencies. Reading like a Viktor Orbán speech, the manifesto calls for leaving behind the “pre-Trump conservative consensus” that “failed to retard, much less reverse, the eclipse of permanent truths, family stability, communal solidarity, and much else.” The statement goes on to say the old conservatism “surrendered to the pornographization of daily life, to the culture of death, to the cult of competitiveness. It too often bowed to a poisonous and censorious multiculturalism.”

First Things editor Rusty Reno wrote in a pro-Ahmari essay that now is the time for religious and social conservatives to take the lead on the political right. “The libertarian and classical liberal leaders have shown that they will not confront directly multiculturalism and identity politics,” Reno correctly argues. “Religious and social conservatives have a substantive vision of the common good, one all Americans can share. This gives us a basis on which to turn back the most destructive forces in our society.”

Where does this leave things? It means there’s a full-blown civil war (long overdue) between those who take an absolutist approach to free market economics, limited government, and free speech and those whose nationalistic, populist, and/or religious views make them want a more robust state that promotes virtue and restricts vice in order to fight, among other things, secularism and globalization.

At present, social media censorship, tariffs, foreign policy, and immigration are just a few of the issues parties involved in this debate disagree over. It’s not that there hasn’t been a lack of consensus on these things before. It’s just that it hasn’t been as stark and out in the open as it is now, thanks in large part to the election of Donald Trump.

The issue now for the nationalist, conservative movement, especially for Ahmari, Reno, and others, is, how do they lead? What, specifically, are the policies they will propose, and how will they win elections, especially after Trump is out of office? Where are the future politicians who will represent this coalition going to come from and who will be their voters?

Some of those questions have already been answered and are getting answered more in depth by various writers. More will come in due time. Some were addressed in this confrontational hour-long debate between Ben Shapiro and Tucker Carlson. Watch it to get a better sense of just how much the two camps disagree on what constitutes proper government involvement.

In January, I wrote about the failure of the French strategy and its naïve faith in “proceduralism.” I also explained what Christians in the U.S. need to do in the years ahead.

In my article, I argued that despite the best efforts of many God-fearing people, the West is in a situation today not unlike the time before Noah. Modern man does not seek what’s true and beautiful. His nature has been so warped by sin, unfettered freedom, and technology that he probably can’t even grasp the natural law anymore. Even if he did, he wouldn’t live by it. Seeking to merely co-exist with the corrupt, modern world is not an option. Christians must, as Brent Bozell Jr. did in the 1960s and ’70s, take a supernatural approach to politics. They must convert souls to Jesus Christ and advocate for policies that aid man on his journey to eternity: just wages, closing businesses on Sunday, a pro-family tax code, censoring public displays of irreligion, and other similar initiatives.

Social conservatives mustn’t be afraid to break ranks with mainstream American conservatives. They should, when necessary, use the authority of the state to uphold what is true and prudently restrict what is false and damaging to civic life. They must lead the fight and no longer be content with being what Ross Douthat has called “junior partner” status in the conservative alliance.

Carol Robinson, a Catholic who wrote for Integrity magazine in the 1940s, once said, “Man thirsts for the infinite, not the wholesome. He will only be wooed away from the dynamism of the devil by Christian dynamism, and Christian dynamism comes from the supernatural.” A “naturally good society is impossible to fallen man.” Sound advice for today’s religious conservatives if you ask me. Conservatives need to go back and revisit voices like Robinson’s – as well as Bozell’s – if they want to properly prepare themselves for the coming tumultuous years.