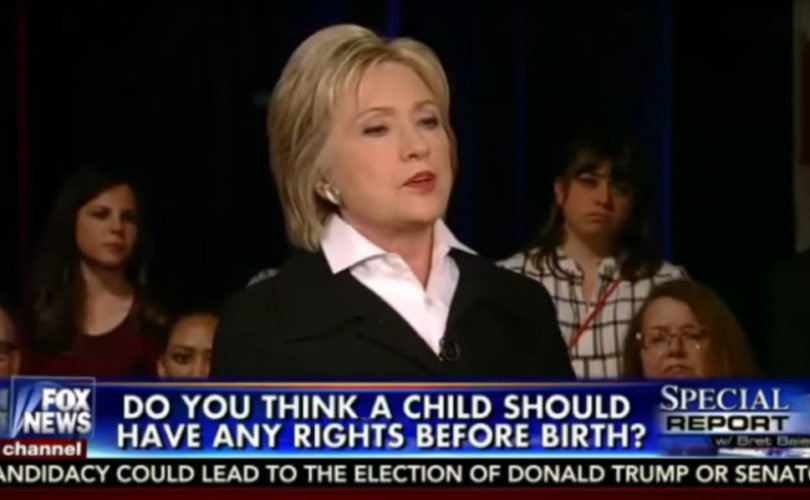 DETROIT, Michigan, March 9, 2016 (LifeSiteNews) – Everyone who follows national events knows that the Democratic Party has, for 45 years or more, been the party of abortion “rights.” Yet while GOP candidates are frequently questioned on their abortion views, the media rarely challenges Democrats on their extreme abortion views.

But at a townhall event Monday, with voters pressuring the moderators using the hashtag #AskAboutAbortion, Fox News' Bret Baier asked the two Democrat presidential candidates what had thus far been avoided.

Baier, noting that Clinton didn't answer his question about when the baby is worth protecting, pressed a little further.  “Just to be clear, there’s no — without any exceptions?” “No,” Clinton stated.

Baier asked Hillary Clinton, “Do you think a child should have any legal rights or protections before (s/he's) born? … Do you think there should not be any restrictions on any abortions at any stage in a pregnancy?”

At first, Clinton dodged the question.  “Right now the Supreme Court is considering a decision that would shut down a lot of the options for women in Texas,” she replied. “Under Roe v. Wade, which is rooted in the Constitution, women have this right to make this highly personal decision with their family in accordance with their faith, with their doctor.”

Clinton went further to defend abortion. “It’s not much of a right if it is totally limited and constrained,” she said. “We have to continue to stand up for a woman’s right to make these decisions, and to defend Planned Parenthood.”

Baier, noting that Clinton didn't answer his question about when the baby is worth protecting, pressed a little further. “Just to be clear, there’s no — without any exceptions?”

And then, Clinton further defended abortion, tying it to women's health. “I object to the recent effort in Congress to pass a law saying after 20 weeks, you know, no such exceptions, because although these are rare, Bret, they sometimes arise in the most complex, difficult medical situation.”

“And so…under Roe v. Wade, it is appropriate to say, in these circumstances, so long as there’s an exception for the life and health of the mother,” Clinton said.

“Can you name a single circumstance at any point in a pregnancy in which you would be okay with abortion being illegal?” he asked Sanders.

Sanders replied, “I happen to believe that it is wrong for the government to be telling a woman what to do with her own body. … That is my view.”

“My Republican friends want to cut Social Security, Medicaid, Medicare — Medicaid, education,” Sanders continued.  “But somehow on this issue, they want to tell every woman in America what she should do with her body.”

Baier asked Sanders again, “There are some Democrats who say after five months, with the exception of the life of the mother or the health of the baby, that perhaps that’s something to look at. You’re saying no?”

Sanders reiterated his total, nine-month-for-any-reason answer:  “I am very strongly pro-choice. That is a decision to be made by the woman, her physician and her family. That’s my view.”

Pro-abortionists praised both candidates. “We are so grateful to Hillary Clinton tonight for, once again, focusing the nation’s attention on the current crisis in abortion access facing this country,” NARAL president Ilyse Hogue stated. “Just last week we were on the steps of the Supreme Court rallying in support of women whose constitutional right to an abortion has been undermined thanks to dangerous, unnecessary restrictions on abortion. This is a crisis that cannot go overlooked and, once again, Hillary shines a light on it in ways no other candidate does.”

Sanders' website states clearly his pro-abortion position: “The decision about abortion must remain a decision for the woman and her doctor to make, not the government.”

Clinton has many times reiterated her support for killing the unborn.  To the Women in the World Conference in 2015, Clinton said, “Far too many women are denied access” to abortion, and said that suggested that “deep-seated cultural codes (and) religious beliefs…have to be changed.”

Clinton receives heavy financial backing from Planned Parenthood employees.  She has promised that under a Hillary Clinton administration the Hyde Amendment denying tax money for abortion would be repealed, and has championed abortion as a solution to rape in war-ravaged countries.  Clinton even likened pro-lifers to terrorists at an August 2015 campaign event in Ohio, referring to the pro-life views of Republican candidates:  “Extreme views about women, we expect that from some of the terrorist groups, we expect that from people who don’t want to live in the modern world, but it’s a little hard to take from Republicans who want to be the president of the United States,” she said.

Under a Sanders administration, “Not only are we not going to retreat on women’s rights, we are going to expand them,” he promises.

As for Sanders, the only time he has ever voted pro-life was for a bill banning human cloning.  He has staunchly supported abortion funding by tax dollars, defended ObamaCare's forced abortion coverage mandate for Christian organizations, and championed partial-birth abortion.

For both Clinton and Sanders, there is no possible abortion, at any time and for any reason, which they don't support.