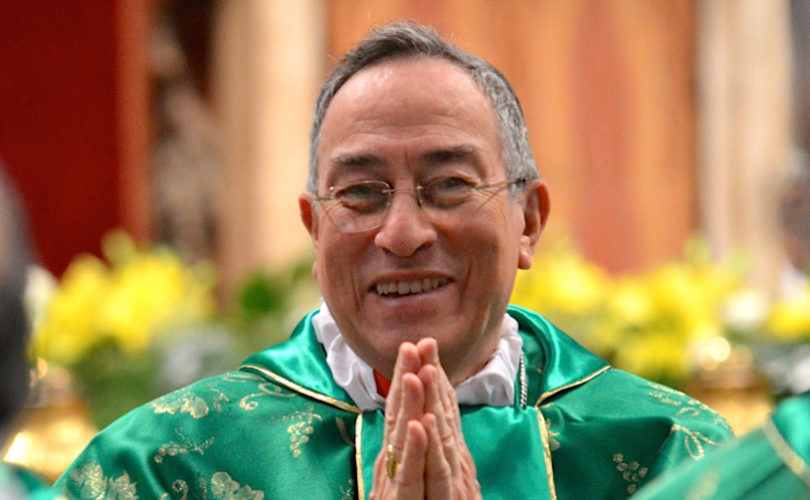 August 10, 2015 (LifeSiteNews) — On August 5, German Catholic author Mathias von Gersdorff posted some important information about an upcoming event in Rome on his own website: “In the meantime, the liberal camp prepares another conference in Rome, to be held on 10-12 September 2015, and which is to deal with the themes of the Family Synod of this Fall.” And he continues:

However, this time, it is not organized by the Germans, the Swiss, and the French. They had already convoked and hosted a similar conference at the end of May 2015, which had caused noticeable irritations. One even considered it to be a “Shadow Synod” and a “Secret Gathering” with the intent to plan the liberal agenda of the Synod in the Fall of 2015 in Rome. Indeed, there spoke [at that May Conference] some of the sharpest opponents of the Catholic teaching on marriage and the family.

After comparing the upcoming conference with the well-known 25 May “Shadow Council,” von Gersdorff gives us some more information:

The most important Man of the Church at the September 2015 conference will be Cardinal Óscar Rodríguez Maradiaga from Tegucigalpa, Honduras. In spite of [sic] his Latin-American origin, Cardinal Maradiaga represents a strongly liberal position. Numerous speakers defend the abstruse positions of Cardinal Walter Kasper, such as, for example, the German theologian Eberhard Schockenhoff. The conference is being organized by the “International Academy for Marital Spirituality,” a clearly liberal institution. The intention of these new [strategic and tactical] initiatives and statements is arguably to remove the Germans [their liberalizing bishops and laymen alike] out of the line of fire. With their earlier attacks against the Catholic teaching and their partially arrogant advances, the Germans had provoked international resistance and maneuvered themselves into isolation.

This can’t be done, however, without listening to the voices of all the faithful, especially those in families and committed relationships [sic] who day by day live their faith and hope in an authentic way. Attention must also be paid to the “contemplation and study made by believers, who treasure these things in their hearts” – a phrase which the Second Vatican Council uses to describe the work of academic theologians (Dei Verbum, 8). […] This international Symposium, which is open to everyone interested, will provide renewed reflection as well as fresh perspectives on a number of issues that need to be addressed, such as the relation between doctrine and pastoral practice, the sense of the faithful, an ethics of mercy, and indissolubility in the context of a contemporary theology of marriage.

When one considers the list of proposed speakers, three names are prominent: Cardinal Maradiaga, close advisor of the pope himself, as well as two German theologians who are known for their progressive attitudes toward the moral teaching of the Church. The one, Professor Eberhard Schockenhoff, had been a prominent participant at the above-mentioned “Shadow Council” where he already spoke about the “life realities” which the Church purportedly has to take into account. He now will speak at the conference on “Indissolubility and Theology of Marriage.” Professor Jochen Sautermeister, the second German theologian, will speak later at the September 2015 conference on “An Ethics of Mercy.”

Let us first turn to Professor Schockenhoff. After the first Synod of Bishops on Marriage and the Family, he made a statement in defense of an ostensible liberal attitude toward “remarried” divorcees and even toward homosexual couples. He said on May 29, 2015 in an interview with the German Catholic radio, Domradio.de:

As a theologian, I do not expect that everything will be expressed in a fundamentally different and new way [at the October 2015 Synod on the Family]. For me, a positive [sic] outcome of the Synod would be of course desirable, because it would show that the Catholic Church is able to reform itself, and that the following principle is also important for it: namely, that the search for more adequate forms of expression of its Faith will continue. But, for me as a theologian, the substantial reasons for positions which I represent are the ones that count. For example, concerning the question as to how to deal with remarried divorcees; the reasons for a respectful, accepting treatment also of those people who live in same-sex living [sic] partnerships. If this would now lead to an official recognition by the Synod, then that is good. But, if that fails, then the reasons are not thereby devalued. They, of course, are still valid. And that is the reason why I look forward to it [the Synod] with a certain detachment.

The second German theologian, Jochen Sautermeister of Munich, published an article in 2014 in the Catholic journal, Herder Korrespondenz, in which he shows himself to be a “Kasperite.” The title of his article is “To Assess Correctly the Life Realities: Challenges For the Pastoral Care For Marriages and the Family According to the Gospels,” and it was published in the special edition 2/2014 of that journal. In it, Sautermeister not only repeatedly quotes Cardinal Walter Kasper's speech to the College of Cardinals of February 2014, but he also makes it clear that he is in favor of a more “understanding” attitude toward those Catholics who live in the state of sin. He even goes so far as to claim that the Church representatives have to learn to question themselves and to doubt their own views and interpretations:

This capacity of questioning oneself respectively the capacity to question one's own point of view and one's own interpretation is an important precondition in order to get closer to the realities and in order to be more just toward people and to enter into a true encounter with them – at least under the condition that closed-in interpretations of the world, of life and of actions are not any more possible [anything goes?]. To put it simply: The competence to perceive means to be able to recognize and control one's own structures of prejudices in encountering other people.

In the context of the Church moral teaching on marriage and the family, these comments can only lead to a liberalizing, laxer attitude toward sin; namely, to question one's own standards (which flow from Christ's words), rather than rebuking the sinner for his own sinful conduct, in order to help him free himself from his sin.

The whole tone of Professor Sautermeister's article reminds one of the “Shadow Council” with its sustained dwelling on subjectivity and private conscientious decisions. The Church thereby is asked to omit her own moral witness and her own role as a moral agent in this world. For example, Sautermeister stresses the independence of the conscience of “modern man” from the Church's teaching, when he says that these themes of the Synod are controversial, indeed,

because they touch upon existential life-realizations of people who consider themselves to be mature subjects of their actions and who do not want to see their own lives to be subjected to a moral-religious interpreting authority from the outside [sic], but who, rather, consider themselves as Christians, even in their own conscientious competence.

After these quotes, one may easily see that this upcoming conference, promoted by Cardinal Maradiaga, will be another “Kasperite” event, or worse, and will follow up on the meretricious themes of the “Shadow Council.” Important in this context, also, is the fact that the organization which stands behind this new conference, the International Academy for Marital Spirituality (INTAMS), had earlier hosted a Day of Study at which another progressive German theologian, Father Martin Lintner, OSM, was a speaker. As INTAMS says on its own website:

13 October 2014, Lay Centre, Rome:
A Dialogue with John L. Allen Jr, Associate Editor, The Boston Globe and Crux
INTAMS brought together a panel of four theologians to dialogue with John L. Allen on “Marriage and the Family Today: Pastoral Challenges and Hopes in Light of the Extraordinary Synod on the Family”. The panel was composed of Philippe Bordeyne, rector at the Institut Catholique de Paris, Martin M. Lintner, OSM, moral theologian at the Philosophisch-Theologische Hochschule in Brixen, Thomas Knieps and Aldegonde Brenninkmeijer-Werhahn. They offered some thought-provoking theological reflections on the theme of marriage and the family today.

Edward Pentin reported in July 2015 how that very same man, Martin Lintner, has caused a scandal worldwide after some of his progressive claims about marriage and the family had been reported by the German branch of Vatican Radio, together with a picture showing two lesbians kissing.

Radio Vatikan reported that Lintner hoped for a more liberal attitude of the Church toward homosexual couples:

Nevertheless: Not only the discussions during the Extraordinary Synod of Bishops last fall 2014 – but also the recent working paper for the upcoming Synod on the Family in October 2015 – both show, according to Lintner, a “change of mind” in dealing with homosexual persons: “The Church becomes more sensible toward the experiences of suffering by the concerned persons and by families in which homosexual persons are living.” This development seems to the moral theologian from the South Tirol — and a member of the Servite Order — “significant, even if the Church stresses that a homosexual partnership has to remain different from a marriage.”

What else do the faithful Catholics need to know about the state of our beloved Church when high-ranking prelates – even with special access to the pope – are allowed to promote a set of teachings that are in direct opposition to the teaching of Our Lord Jesus Christ Himself? May this conference soon be called off. May the Magisterium of the Catholic Church close this chapter quickly and firmly restate the traditional moral teaching of the Church, which has been a blessing for so many happy and fruitful families over the centuries.