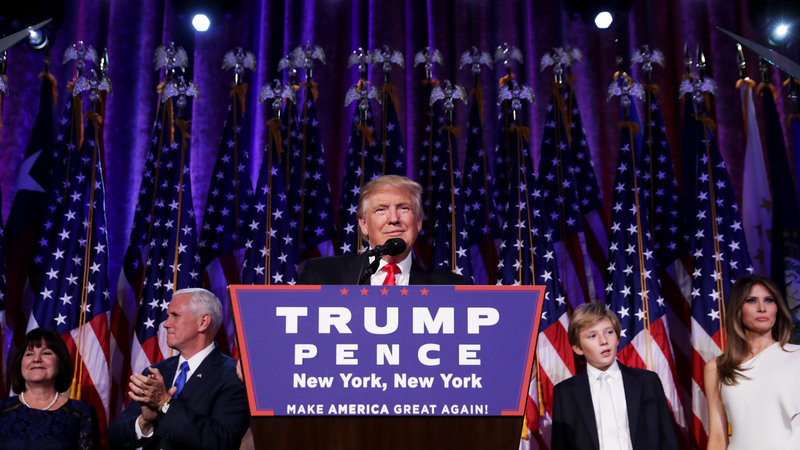 November 9, 2016 (MercatorNet) — Donald Trump has been elected President of the United States, in a victory which gobsmacked the media and pundits. Trump overcame sex scandals, bad debates, a shambolic organisation, hostility from the grandees of his own party and a relentlessly hostile media.

It was a smashing success. Instead of dragging the Republicans into infighting, irrelevance and obscurity, the former reality TV star delivered them the Presidency and control of both the House of Representatives and the Senate.

On October 1, according to the New York Times, the odds were 76 percent in Hillary Clinton’s favour and steadily increased from there. On the very eve of the election the Times declared that the probability of a Clinton victory was 85 percent.

The pollsters tried hard. After the unexpected victory of Brexit in the United Kingdom, they realised that their models could be wrong. They tried to take into account voter turn-out and the limitations of telephone polling. They failed.

But it wasn’t just the number crunchers who failed. The pundits read in the tea leaves that Clinton would bring together a coalition of workers, professionals, black and Hispanics which would propel her to victory. It made sense. She was competent, experienced, a woman, a Clinton, articulate, coherent, knowledgeable, and familiar. She embraced all the right policies on immigration, foreign policy, women’s rights and gay rights. Yet she lost.

There is obviously a chasm between the commentariat and the commoners. The New York Times is hardly unique, but it is primus inter pares of Clinton supporters, so it deserves to be singled out for criticism. Day after day, it relentlessly ridiculed Trump, shamed his supporters, and deprecated his chance of winning. Did all this energy have any effect upon the election? Possibly not.

The initial reaction of its columnists was to vilify the voters who had pulled the rug from under their feet. Paul Krugman, the paper’s Nobel Prize-winning columnist, wrote in anguish that America has far too many hillbillies:

There turn out to be a huge number of people — white people, living mainly in rural areas — who don’t share at all our idea of what America is about. For them, it is about blood and soil, about traditional patriarchy and racial hierarchy.

And Roxane Gay, a bisexual essayist, academic and columnist at the Times wept over the ascendency of the “deplorables”:

No doubt many others in the media establishment feel the same: that most Americans are racist homophobes who yearn for the values of forever-vanished monocultural world of the 1950s. And Krugman’s dog-whistle phrase “blood and soil” is a sly way of calling them Nazis as well.

There is no point in raging over this level of ignorance, condescension and hatred of ordinary Americans. The point is that if they were so clueless about the state of American politics, how can the policies and causes that they endorse be trusted?

I don’t feel like rejoicing at Trump’s victory. He is a demagogue and a man of low character. But he will shake up America’s complacent elite and their belief that progressive values represent the end of history. He will force them to pay attention to the “little people”. As Trump said in his victory speech, “The forgotten men and women of our country will be forgotten no longer.” Some good will come from that.

One advantage of the Westminster system of democracy is that its leaders resign when they fail. That way the prime minister always stays roughly in sync with the mood of the country. When British Prime Minister David Cameron put his reputation on the line to defend his country’s membership of the European Union, he failed. And then he resigned.

The extraordinary victory of Donald Trump represents an abject failure of the American intelligentsia to understand the mood of the electorate. But will they resign? Fat chance.

Michael Cook is editor of MercatorNet. Reprinted with permission.