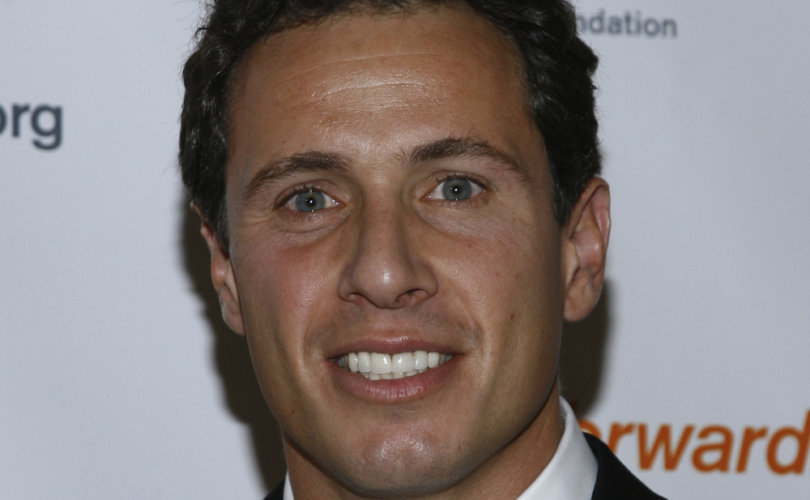 February 27, 2017 (LifeSiteNews) – Last week, CNN’s Chris Cuomo spent time debating folks on Twitter about the transgender bathroom issue and ended up advocating for men in girls’ bathrooms, saying that if a young girl doesn't want to see male genitalia, it's because either she or her father is a bigot.

So if a 12-year-old girl feels uncomfortable or scared by seeing a naked person in the women's bathroom who has male genitals but identifies as a woman, it's somehow the 12-year-old girl's problem because she's “intolerant” to trans people? Makes a lot of sense doesn't it? Not!

When another Twitter user questioned the flawed argument, Cuomo claims his point was “dead clear.” He said, “This isn't about a scared girl. It is about an overprotective parent who is afraid without basis.”

Well, if I were to put myself in the shoes of the parent (or the girl, for that matter), I'm pretty sure I'd have a more than justified reason for taking offense at a “trans” person in the bathroom. In fact, we don't even need to be talking about “trans”people here. For starters, no girl should be exposed to the sight of male genitalia like that. Period. To try and justify that is both insane and on the slippery slope to pedophilia.

But other people weren't buying the malarkey …

Ummm hang on, actually you did say that. Now you're lying.

So apparently if a 12-year-old girl has an issue with seeing male genitalia in their bathroom, then they need a lesson in tolerance. A bit like saying we should be tolerant of murder, rape or theft. Sounds legit …

The point is not that the parent may or may not be afraid of such a situation but rather he/she would be more concerned about protecting the innocence of his/her child. In that case, tolerance is totally irrelevant. The guardianship of innocency is a basic right that every single young child should have the right to.

Cuomo clearly ignores some very disturbing incidents in recent times where so-called 'transgenders' used their assumed sexual identities to enter female locker rooms and rape and/or peep on women. Clearly, transgender bathrooms enable sexual predators to have much easier access to their prey.

In February 2016, LifeSiteNews reported that a man twice entered the changing room of a Washington swimming pool and began disrobing, once in front of a young girls swim team, saying transgender policies gave him the right to do so.

In April 2016, a Quarryville, Pennsylvania, man was arrested and charged after a 10-year-old girl told her mother that she caught him watching her as she used the bathroom, CBS North Carolina reported.

In March 2014, a Toronto man claiming to be transgender was arrested and sentenced to jail 'indefinitely' for sexually assaulting several women in a women’s shelter after he gained access to the shelter and its shower facilitates as “Jessica,” reported LifeSiteNews.

In November 2015, a Virginia man was caught and arrested for peeping on and filming two women and a 5-year-old child in a women’s restroom after receiving entry by dressing in drag.  Reports suspect that this was not Richard Rodriguez’s first time peeping on women by dressing himself up as woman to enter a restroom; disturbingly, he likely spied on a 53-year-old woman in May 2015 and a 35-year-old and her 5-year-old daughter in October. “Rodriguez was charged with three counts of unlawful filming of a non-consenting person and three counts of peeping,” reported NBC Washington.

In May 2013, a Los Angeles man dressed in drag entered a Macy’s department store bathroom and recorded “hours” of footage of undressed women under bathroom stalls, according to NBC Los Angeles. Jason Pomare reportedly disguised himself with a wig and fake breasts; he kept his video camera with him in a small purse. He was arrested and charged with six counts of unlawful use of a concealed camera for purposes of sexual gratification.

In 2012, a 45-year-old biological male who calls himself Colleen Francis lounged naked in a women’s locker room, in an area frequented by girls as young as six. According to the police report, an eyewitness stated, “There were girls 6 to 18 years of age and they were not used to seeing individuals in situations like this.” But the facility gave him the right to continue using its facilities as he wished.

In October 2015, two male students were caught at the University of Toronto exploiting “gender-neutral” facilities to peep on women in the shower with their cellphone cameras. The university subsequently dumped the transgender bathrooms concept after these incidents, LifeSiteNews reported.

Cuomo, it would be fair if young girls were not exposed to such indecency. That's what truly counts.

It is shocking that this is how society has ended up where flashing one's genitals in front of the opposite sex — especially at young children — is somehow acceptable and warrants a 'tolerant' response.

This is nothing less than the public promotion by a TV anchor of deviant behavior that once upon a time would get you locked up without any such argument as “tolerance” to get you off scot free.