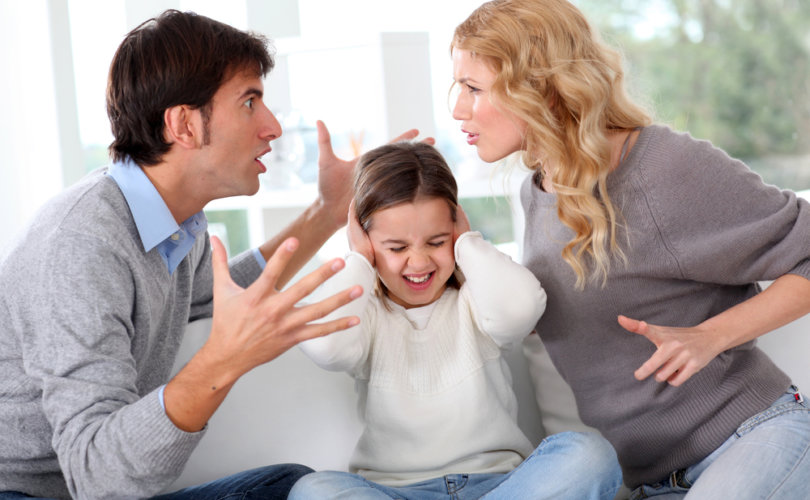 November 18, 2016 (LifeSiteNews) — In busy mental health practices over the past decade or more, increasing numbers of attractive Catholic young women are seeking help for symptoms of intense anxiety, panic attacks, sadness with uncontrollable crying and intense episodic anger.  When the history is taken, a severe betrayal experience is often related of the ending of a two to three-year cohabiting relationship. Most of these young women had hoped when they moved in with their boyfriend that their relationship would lead to marriage and children.

As time went by the romantic and sexual relationship were not sufficient to offset the harsh reality and sadness of living with a person who was profoundly selfish and not interested in being a responsible and sacrificially giving husband and father.  Often these young men were from a two child Catholic family in which they were overly indulged, never engaged in sacrificial giving and were never corrected for their selfishness.

In our experience the short lived cohabiting relationships are one of the reasons that antidepressant use among Americans is skyrocketing.  A 2014 article in Scientific American (November) reported that the U.S. consumed four times more antidepressants in the last several years than they did in the early 1990s.

The widespread cultural acceptance of cohabitation has led the majority of Catholics to believe falsely that this lifestyle is psychologically healthy, prepares young adults for marriage and helps in weeding out negative relationships before a lifelong marriage.  The harsh reality is that these unions are short lived and regularly leave deep psychological scars in those involved, as well as to children born into them.

The clear teaching of St. John Paul II on marriage, the family and cohabitation from The Role of the Christian Family in the Modern World, also known as Familiaris Consortio, is needed now more than ever, especially in view of Pope Francis’ recent confusing comments on marriage and cohabitation.  The Holy Father stated at a pastoral congress on the family for the Diocese of Rome on June 16 that the majority of marriages are null and that some cohabiting couples are in a “real marriage,” receiving the grace of the Sacrament.

Catholic parents, Bishops, priests, singles, siblings, relatives, friends, educators need more knowledge about the reality of cohabiting unions in order to protect youth from them and also greater confidence and fortitude to communicate in Churches, homes and schools the serious risks of cohabitation to the long term happiness and psychological health of those considering this lifestyle.

Many Catholic single males are engaging in a major retreat from marriage.  By cohabiting they can see no reason for marriage since their needs for female friendship, romantic love and sexual intimacy are being met.

A 2013 report on cohabitation from the National Center for Health Statistics on 12,279 women, ages 15-44 demonstrated:

The Causes of Cohabitation

Blessed John Paul II wrote in The Role of the Christian Family in the Modern World, “It will be very useful to investigate the causes of this phenomenon, including its psychological and sociological aspect, in order to find the proper remedy” (paragraph 80).

Dr. Brad Wilcox, the director of the National Marriage Project at the University of Virginia, wrote in his 2011 report Why Marriage Matters, “One of the primary reasons for getting married—starting a family—is increasingly viewed as a relic of the past. The institution of marriage, and even the presence of two parents, are seen as nice but not necessary for raising children. Thus, even when a baby is coming, many young adults see no need to rush to the altar. Finally, many young adults in romantic relationships greatly overestimate the chances that they have already met their future spouse, which makes them vulnerable to sliding into parenthood even though they haven’t married.”

In our clinical experience over the past 40 years, the six leading causes of cohabitation are:

Unfortunately, many in the Church have deliberately been at work for decades trying to undermine the Church’s liberating truth about sexual morality in their dioceses, secondary schools and universities.

St. John Paul II has written about the origins of cohabitation which is consistent with our clinical work and that of many Catholic mental health professionals:

At the root of these negative phenomena there frequently lies a corruption of the idea and the experience of freedom, conceived not as a capacity for realizing the truth of God's plan for marriage and the family, but as an autonomous power of self-affirmation, often against others, for one's own selfish well-being (The Role of the Christian Family in the Modern World, n.6).

Most of the young women and men we see for cohabitation posttraumatic stress disorder have been wounded by such toxic, arrogant selfishness.

In other cases, however, one encounters people who scorn, rebel against or reject society, the institution of the family and the social and political order, or who are solely seeking pleasure. Then there are those who are driven to such situations by extreme ignorance or poverty, sometimes by a conditioning due to situations of real injustice, or by a certain psychological immaturity that makes them uncertain or afraid to enter into a stable and definitive union. In some countries, traditional customs presume that the true and proper marriage will take place only after a period of cohabitation and the birth of the first child (F.C., 81).

Amoris Laetitia identifies cohabitation as “often not motivated by prejudice or resistance to sacramental marriage, but by cultural and contingent situations” (n. 294). The analysis completely ignores the serious psychological conflicts of selfishness and anger against sacramental marriage in many of those who chose to use others as sexual objects in cohabiting unions, but never plan to marry or have children.

Dr. Popenoe, former director of the National Marriage Project, has accurately described cohabitation as a low commitment, high autonomy pattern of relating.  Barbara Dafoe Whitehead, author of The Divorce Culture commented that, “Living together is not to marriage as spring training is to the baseball season.”

Psychological research is showing that those in them have far greater likelihood of having depressive and anxiety disorders and have a diminished likelihood of later marital stability and happiness. Also, the children born into these unstable relationships that lack deep commitment have far more psychological disorders than those in marriages.

Research studies available on our website, www.maritalhealing.com, demonstrate that:

Each of these elements presents the Church with arduous pastoral problems, by reason of the serious consequences deriving from them, both religious and moral (the loss of the religious sense of marriage seen in the light of the Covenant of God with His people; deprivation of the grace of the sacrament; grave scandal), and also social consequences (the destruction of the concept of the family; the weakening of the sense of fidelity, also towards society; possible psychological damage to the children; the strengthening of selfishness) (F.C., n.81).

Unfortunately, chapter 8 of Amoris Laetitia, nos. 293 and 294 on cohabitation, completely ignores the extensive sociological and psychological science on the numerous risks to children and adults from unstable cohabiting unions.  It also fails to warn about the harm to marriage caused by them.

The severe harm caused by the cohabitation epidemic and the retreat from marriage can only be brought to an end by new systematic catechesis for our time on the truth and beauty of God’s plan for married life and sexuality.  St. John Paul II’s The Role of the Christian Family in the Modern World, Love and Responsibility and Theology of the Body could be an important foundation for such a program.  This groundbreaking theology has hardly been introduced to Catholic parents and young Catholics.

Dr. Rick Fitzgibbons, MD, is the director of the Institute for Marital Healing outside Philadelphia and has worked with thousands of couples over the past 40 years, including hundreds of Catholic married couples and youth. He is also an adjunct professor at the Pontifical John Paul II Institute for Studies on Marriage and Family at Catholic University and is a board member of the International Institute for Forgiveness.