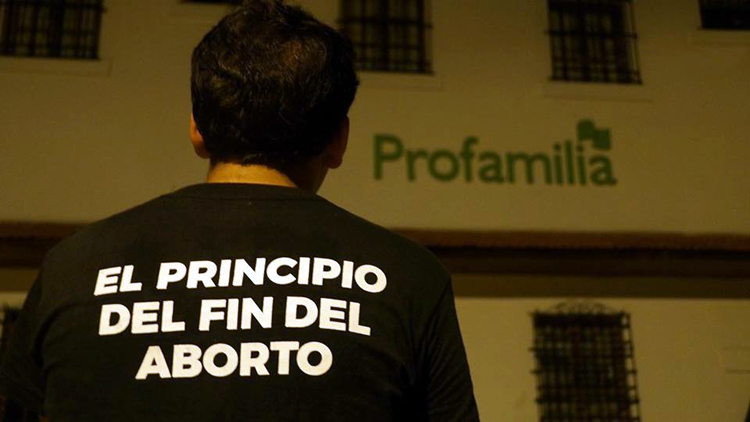 June 17, 2016 (40 Days for Life) — Colombia is principally known for its beautiful landscape and exotic natural species of flowers and fauna, which are spectacular and can't be found in other place around the world.

Colombia is also known for having the largest number of wild bird species, the best coffee of the world and a diversity of climates and marvelous cultures.

Unfortunately, Colombia is also known around the word for being one of the most dangerous countries, victim of a violent internal conflict during the past six decades. This violence changed from an ideological war of guerrillas to a humongous drug business and mafia, killing thousands of innocent people and corrupting our society.

This permanent violence produced a high dosage of indifference in our society, and turned us into a nation that learned to be strong towards any type of conflict, poverty and generalized corruption.

Despite such reality, Colombia has an admirable political constitution that declares in paper that the country will protect the right of all citizens and, will respect and will demand overall, the respect of life as a fundamental right.

For more than 40 years, a big part of Bogota's society has known that in the traditional neighborhood of Teusaquillo, approximately 30 legal and clandestine houses promote “sexual health,” offering people free contraceptives and doing abortions of all kinds. Around the streets you can see woman and men promoting abortion and fighting for clients. They want to earn a commission of approximately 20% for each abortion they sell for these centers. In this neighborhood abortion may cost from about $40 to $400 in US dollars.

In 2012 the Media Alliance made public the results of a national survey; 76% of those polled responded that they don´t agree with the legalization of abortion in all cases. Amongst young people between 18 and 24 years, this percentate was 76%, and in people between 25 to 34 years of 71%. The young people of Colombia have a conservative position, like the one old people have; clearly, the majority refuses free abortion.

Nevertheless, the pro-abortion movement intends to make Colombia an international example of an advanced progressive agenda in the region. This year our Public Prosecutor submitted before the Congress of Colombia a bill that permits abortion in any case until week 24 of pregnancy!

In the middle of this situation, in the second half of 2015, the first campaign of 40 Days for Life arrives in Bogotá, Colombia. It’s an initiative that responds to a silent praying of those who thought abortion was a reality impossible to break.

In this movement, many people find a way of saying that they do not agree with abortion in a very simple, peaceful and compassionate way; may others also find hope and a way of breaking their indifference towards abortion, and even pave the way to start the reconciliation with themselves for those abortions they’ve had in the past.

In Bogota, more than 2.500 persons participated in the vigil. They came from different parishes and communities from Bogotá and the suburbs. We learned of 12 women that decided not to abort; 40 catholic priests offered their masses for the end of abortion (the vigil in Bogota is being held in front of an abortion center which is, paradoxically, right across the street from the Catholic parish St. Anne).

This was a prayer vigil with no precedent in our city. We had the blessing of having seven different processions with the Most Holy Sacrament. We also had a great deal of media coverage; international, national, Catholic and secular media outlets came to report this incredible 24-hour, 40-day prayer vigil.

All this drew the attention of other people in other cities of Colombia, who wanted to host campaigns and who were aware of the evilness of abortion. They too wanted to act.

In early 2016, 40 Days for Life was hosted in ten additional cities. We registered between 500 and 1,000 persons in each city. In all, 35 babies were saved by their mothers who decided not to abort — thanks to the the national campaign. We had national and local media visiting our campaigns around the country.

40 Days for Life has touched hearts in our country and is a clear example on how to build bridges that help us to see the power of being one, of trying to live in fraternity and true love and solidarity.

40 Days for life arrived in Colombia as a campaign to help people warm their hearts and start walking towards the desired peace in our nation. It is an initiative that builds unity between people of different beliefs, communities, groups, cities, ages and social classes. This initiative has succeed in Colombia as a campaign that shows that this country is a pro-life one, that it is made of good and honest people, that want to live in peace, forgiveness and reconciliation.

We want to keep praying for the end of abortion — and we can’t stop thanking God for the grace of 40 Days for Life in Colombia.