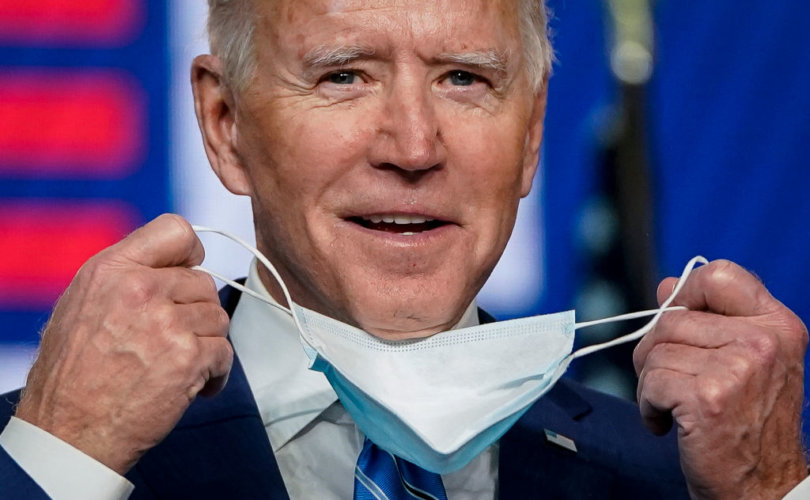 WILMINGTON, DE - NOVEMBER 04: Democratic presidential nominee Joe Biden takes his face mask off as he arrives to speak one day after America voted in the presidential election, on November 04, 2020 in Wilmington, Delaware. Drew Angerer/Getty Images

November 5, 2020 (LifeSiteNews) – I know that some of you may be dispirited, even despairing, that Trump and all of us who support him didn’t achieve a decisive win on election day.  But events are moving very quickly now.  We need everyone to get back on their feet and back in the game.  Your country needs you.  The babies need you.

The first thing everyone must recognize is the seriousness of the current situation.  We are in the middle of what is called Color Revolution.  This is a carefully scripted coup intended to take down our constitutional republic and transform it into something unrecognizable to our Founders and inimical to our liberties.

This means that what just happened was not a “normal” election.  Rather, it was a pre-scripted scam used by the revolutionaries to determine how many votes they needed to tip the balance in their favor.  Once they knew that number—in Michigan, Wisconsin, and Pennsylvania—late ballots are being “discovered” to put their candidate in the lead.  This is how the Left operates in places like Venezuela.  It must not be allowed to succeed here.

The forces arrayed against us are formidable.  I’m not talking here just about the Democrat Party.  Despite the fact that it has been hollowed out by Socialists, it alone could be dealt with.  Rather, I’m talking also about the Globalists and their institutions, including Wall Street and the major U.S. media.  And, of course, I’m talking about the Chinese Communists and their many front organizations and flunkies in the United States. Joe Biden is the compromise candidate of all these groups.

READ: Viganò: America is in midst of ‘colossal electoral fraud,’ we must pray NOW to defeat enemy

In the same way, the chaos is not just about President Trump; it is about defeating and disarming every last one of us who believes in the promise of America as a sovereign nation that defends life, protects liberty, and preserves equal justice before the law.  As the president has said, “They are really after you.  I am just in the way.”

In order to encourage each other and organize, we must all move onto new media.  Even Fox (aside from the evening talk show hosts) can no longer be trusted.  Sign up for LifeSiteNews and other news sites like Epoch Times, Breitbart, Newsmax, One America News (OAN), or Real America’s Voice.  Use Twitter but link up on Parler as well for the day when @Jack shuts you down like he has so many others.

To encourage ourselves and others, keep the Trump signs up and the flags flying.  Ramp back up the Trump Trains that shocked the opposition.  I look for the President and his surrogates to start holding rallies again soon.  It’s a great way for him to bypass the hostile media and speak directly to the American people.

Don’t listen to the voices of surrender—there will surely be a few of these from the members of the Republican Establishment.  Take your cues instead from people like Newt Gingrich, Tom Cotton, Allen West, Mike Huckabee, Donald Trump Jr., and, of course, from the President himself.

Finally and most importantly, we must pray.  Try to spend some time before the Blessed Sacrament to pray for our country and our president.  The late, great Father John Hardon often reminded us to never underestimate the graces that flow from spending any amount of time in His Eucharistic presence.

Prayer can change history.  We all know about the Battle of Lepanto.  But let me also share with you a much more recent example that comes from the “People Power” revolution in the Philippines which was shared with me by Cardinal Jaime Sin, the then-Cardinal-Archbishop of Manilla, over dinner some years ago.

In 1986, the people of Manilla rose up and demanded an end to the dictatorship of Ferdinand Marcos.  Cardinal Sin was afraid that the demonstrations, which grew larger every day, would end in a government crackdown and much bloodshed.

He called all of the convents in the country and begged the nuns to get down on their knees before the Blessed Sacrament and pray for divine intervention.  “Raise your arms to Heaven as Moses did and pray for victory,” he told them.  “Pray that Marcos will step down, and democracy restored.”

The key moment came when the demonstrators approached the presidential palace.  The palace guard was lined up in firing position.  Just as the commander was about to give the order to fire, a beautiful lady appeared in the sky before the soldiers.  They all simultaneously took their fingers off the triggers.

The massacre was averted and Marcos fled.

In order to defeat those who would steal not just an election, but our very country, we must likewise storm Heaven.