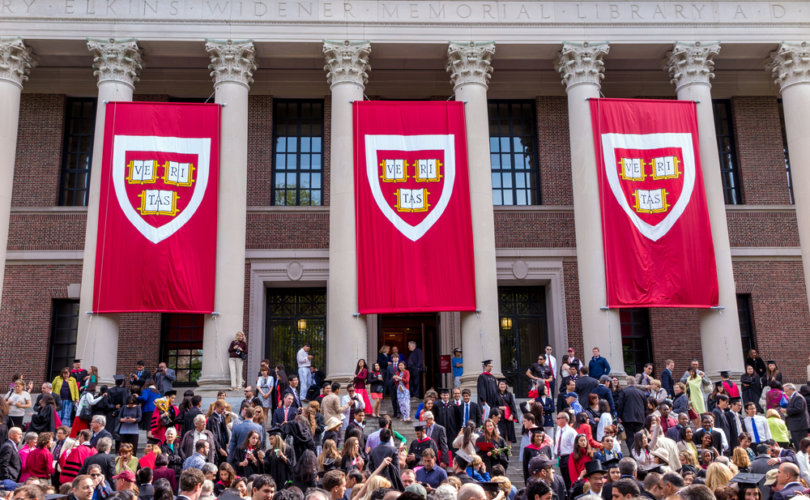 Why were these schools upset with offensive remarks made by their male athletes? After all, both have a record of tolerating offensive events targeting Catholics. Moreover, both celebrate sexual deviance.

In 2002, Fordham and Columbia faced off against each other in a football game held on the Ivy campus. During half-time, the Columbia game announcer shouted, “Fordham's tuition is going down like an altar boy.” The crowd loved it. The offending student, AndyHao, did not fly off the handle: his bigoted remarks were approved by an administrator, Catherine Webster.

I later met with Columbia president Lee Bollinger, who apologized. Did it do any good? The next year, the Columbia band performed during a half-time game against Dartmouth; it invited the crowd to join them in their “celebration of partial-birth abortion.”

In 2010, “XMAS!” was performed at Columbia. The play depicted the Virgin Mary begging for sex.

In 2012, Harvard hosted a “Black Mass,” the work of the Satanic Temple. The express purpose of this event was to denigrate the Mass by inviting students to participate in Satanic worship. The initial response of Harvard was to distance itself from the attack on Catholics; it stressed the independent status of the student group that made the invitation. Under pressure by the Catholic League and others, President Drew Faust condemned the stunt and led a protest against it. I commended the president for her response.

Christmas on the campus of Harvard has been neutered for years. “Holiday trees” are allowed, but not without resistance: Students atLeverett House have compared the tree to a “Trojan horse.” Jewish religious symbols are permitted, but not Christian ones. In fact, some students say that allowing a nativity scene might occasion the display of swastikas.

If this isn't perverse enough, consider that both Columbia and Harvard—now horrified by sexist language—have been encouraging sexual depravity for decades.

On the website of Columbia, prominently featured under “Sex Week,” is an article titled, “A Woman's Right to be Spanked.” The author describes a movie that features a secretary who is interrogated by her boss about her sex life. She is told to “bend over the boss's desk to receive a spanking for making repeated spelling errors.” That's just for starters.

“At one point,” the female writer says, “she is seen delivering the mail to her boss while crawling on her hands and knees, with the letters clutched in her mouth. In another instance she is gussied up as a horse on his desk complete with a bridle and a saddle.” And so on.

The author's conclusion is telling. “While this may sound like a definitive extreme case of sexual harassment, in fact it is the plot to a love story.” Romeo and Juliet, move over.

If Columbia and Harvard want civility on campus, they need to treat everyone equally—beginning with Catholics—and stop exercises that foster incivility. And if they are really serious about stopping sexually exploitative language, they may want to ask themselves what lessons young men are likely to draw from their “Sex Week” events on campus.

Reprinted from the Catholic League for Religious and Civil Rights.