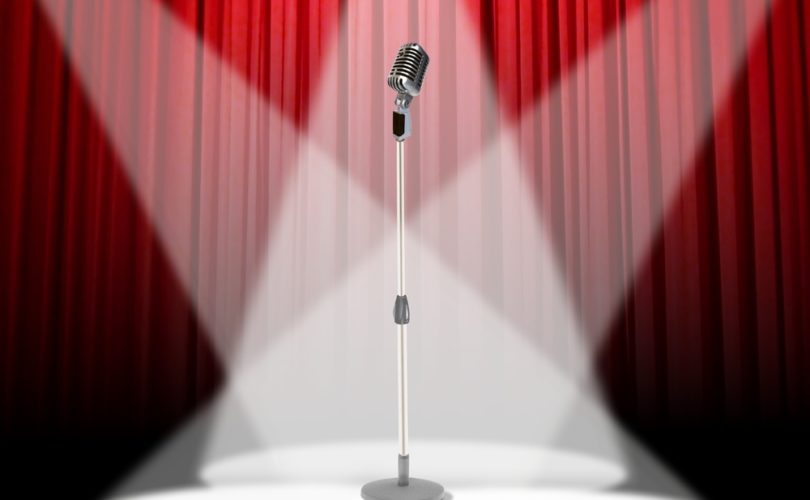 August 4, 2015 (MercatorNet) — Many a comedian fears “death on the stage”. Not loss of life, exactly, but that split second when a joke misfires and he loses the audience.

Jenny Kleeman, a journalist with The Guardian, has been following Australian euthanasia activist Philip Nitschke as he enters a new career as a stand-up comedian at the upcoming Edinburgh Comedy Fringe Festival in Scotland.

Much of her video report (above) comes from a workshop in London where Nitschke has been road-testing his show in front of members of Exit, his assisted suicide information group. Kleeman’s comments are telling: “Is Philip about to change the way we view the ‘right-to-die’ or is he about to ‘die on his feet’?”

As I watched the Exit crowd I found myself thinking of “the four Ws”, as many in the disability community would say. Indeed, the audience was “White, Well, Well off and Worried”. One participant interviewed parroted the Exit sales pitch: “I get some satisfaction that I’m in control of a situation that might otherwise be out of control.” It sounds convincing but, in reality, it is not about control; it’s about avoidance.

From what I saw of Nitschke’s performance, it seemed flat and forced. This surprised me. I have debated him several times and he has been incredibly funny. Maybe it’s not a good look for the No side of the debate to be laughing along with the opposition, but more than once I found myself holding my sides in laughter. Perhaps there’s a difference between incidental humour and pitching a gag.

But the most important reason for the change in tone may be the eleventh hour withdrawal of British comedian Mel Moon from Nitschke’s show. She was going to turn the awkward Australian doctor into a polished comic who would slay them in the aisles.

Mel contracted an incurable disease in 2010 after the birth of her second child. She was diagnosed with an endocrine disorder in 2013 at the age of 35. It was, in her own words, “an incurable disease that could kill me; any minute, any where, any day!” Still worse, the drugs she needs were not available on the British NHS and are, therefore, very expensive.

In January, in an ABC (Australia) story announcing her double act with Nitschke, Moon was frank about her situation:

“There was seemingly no positive outcome just more of the same until one day I'd die. Quality of life had gone, my relationship was almost over, I couldn't even hold my children as it hurt too much. I just thought one day, enough! I wanted to take back control so I contacted Exit (UK branch) to look at options, read his book and contacted him directly.”

Without the advice of Nitschke, she would have committed suicide.

“(He) told me to keep going and try everything I could… when they offered me a non-FDA approved drug to try as a last resort; I said yes. Thankfully it's working for me and, though the old me is long gone I'm starting to grow affectionate towards the new me, even though I need a stupid amount of naps per day.”

After learning that Nitschke was interested in stand-up comedy, the grateful comic suggested that they team up. “It was a pretty amazing offer. I couldn’t believe my luck really,” Nitschke said. They began to write a script based on Nitschke’s long experience with people who wanted his help in committing suicide. They even had a working title for the script, “Dying Laughing”.

But then something tragic happened. No, Mel didn’t die. Quite the opposite: she got better. So everything changed. She told The Guardian:

“I really wanted to work with Philip, but we are very different people. I was a very poorly person at one point; and, even though I’m not fully recovered, I’m a hell of a lot better than I ever was. I want to live now and I want to talk about living.

“And it was a real conflict of interest because obviously their message is about the ‘right-to-die’ and ‘ways to die’ and I could see the makings of a workshop and Philip has clearly said it would resemble (a workshop) and I really didn’t want to be a part of a workshop.”

Perhaps that’s the reason Nitschke’s career as a comic is faltering.

As a doctor, he succeeded when people died. His failures were patients like Mel Moon who recovered their zest for living as soon as they felt a bit better.

Making failure your key performance indicator doesn’t work when you’re telling jokes. If your one-liners fall dead, you will be booed offstage. Deregistered as a doctor, defenestrated as a comic: it’s a sad end to Philip Nitschke’s professional life.