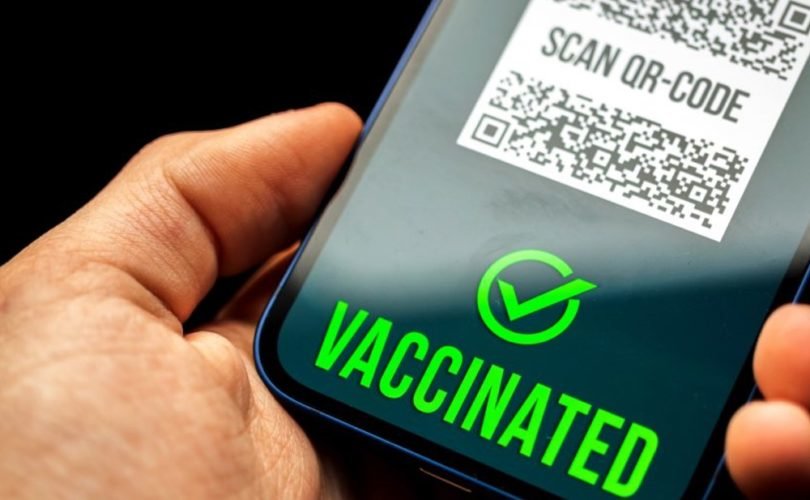 March 30, 2020 (Children’s Health Defense) – The Biden administration and private companies are working to develop vaccine passports that would allow Americans to prove they’ve been vaccinated against COVID as the country opens, The Washington Post reported Sunday.

The initiative, driven largely by the U.S. Department of Health and Human Services, has gained momentum as a growing number of companies and venues — from movie theaters, restaurants and music venues to cruise lines and sports teams — have said they will require proof of vaccination before opening their doors.

The passports are expected to be free and available through smartphone apps, which would display a scannable code similar to an airline boarding pass. Americans without smartphone access would be able to print out the passports, developers have said.

The White House declined to answer questions about the passport initiative, instead pointing to public statements made by Jeffrey Zients, the White House coronavirus response coordinator during a March 12 press briefing:

“As we increase the number of people vaccinated, we know some people may have a need to demonstrate that they are vaccinated … our role is to help ensure that any solutions in this area should be simple, free, open source, accessible to people both digitally and on paper, and designed from the start to protect people’s privacy.”

According to CNN, multiple government agencies are engaged in conversations and planning, coordinated by the White House, as this kind of system will play a role in many aspects of life, including potentially the workforce.

One of the most significant hurdles facing federal officials is the number of passport initiatives already underway. The Biden administration this month identified at least 17, according to slides obtained by The Washington Post.

One initiative  — a global effort led by the World Health Organization and a digital pass devised by IBM — is being tested in New York state and is rapidly moving forward as the White House deliberates how best to track shots and avoid the perception of a government mandate to be vaccinated.

On Friday, New York was the first to launch a digital vaccine passport system known as Excelsior Pass that residents can use to prove they’ve been vaccinated or recently tested negative for infection, reported USA TODAY.

The New York system, built on IBM’s digital health pass platform, is the first-in-the-nation certification and will be used at dozens of events, including arts and entertainment venues. A venue will scan the QR code, which will generate either a green check or a red X.

The new pass is part of a growing but disjointed effort to provide vaccine “passports” or certifications, so people won’t have to hang onto a dog-eared piece of paper, worry about privacy issues or forgeries, or pay money to prove they’re not contagious.

According to NPR, New York described the pass this way:

“Businesses and venues can scan and validate your pass to ensure you meet any COVID-19 vaccination or testing requirements for entry. Along with your pass, you’ll be asked to show a photo ID that shows your name and birth date to verify that the Pass belongs to you. Adults may hold passes for accompanying minors.

“Once you and your party enter an establishment, you will still be asked to follow state and CDC guidance regarding social distancing, face coverings and hand hygiene.”

Participation in Excelsior Pass is voluntary, but New Yorkers will have to show alternate proof of vaccination or testing, such as another mobile application or paper form, directly at a business or venue.

Both Madison Square Garden, which is part of the pilot’s program phase, and Times Union Center will begin using the passes by early April with other businesses and venues expected to follow.

The state hopes to eventually link tickets to the Excelsior Pass, so people going to an event at Madison Square Garden, for example, will be able to link their admission and health passes.

But, according to Dr. Naomi Wolf, founder and CEO of Daily Clout, the passport violates people’s liberty.

Last night on “The Next Revolution” with Steve Hilton on Fox News, Wolf said:

“I am not overstating this. I can’t say it forcefully enough. This is literally the end of human liberty in the west if this plan unfolds as planned. Vaccine passports sound like a fine thing if you don’t understand what these platforms can do …

“It’s not about the vaccine. It’s not about the virus. It’s about your data. And once this rolls out you don’t have a choice about being part of the system. What people have to understand is that any other functionality can be loaded onto that platform with no problem at all. What that means is that it can be merged with your Paypal account, with your digital currency, Microsoft is already talking about merging it with payment plans. Your networks can be sucked up. It geolocates you wherever you go. Your credit history can be included. All of your medical history can be included.”

Most important warning I’ve ever sounded in my life, with the least time left to take action: https://t.co/Q00d55My6l

Wolf isn’t the only one slamming vaccine passports. Rep. Pete Sessions (R-Texas) said in a statement to Fox News:

“Vaccine credentials would be a complete government overstep. Individuals in America have a personal responsibility for their health,” said Sessions. “Implementing a ‘vaccine passport’ runs the risk of undermining public trust and substantially limiting normal day-to-day essential activities.

“As a leader, I have chosen to be vaccinated – that was my own decision.”

Other countries are racing ahead with their own passport plans, with the European Union pledging to release digital certificates that would allow for summer travel, according to the Washington Post.

On March 23, The Defender reported that the European Union was set to vote on a vaccination travel digital certificate, “Green Passport,” which would provide proof of vaccination and negative COVID test.

The pass would include information on the brand of the vaccine, date and place of inoculation and the number of doses administered, as well as information from a lab or hospital confirming negative test results. Holders of the certificate (a QR code on a phone app or on paper) would be exempt from quarantine and other restrictions. The document would be common to all EU citizens and would allow bilateral deals between EU countries and non-member states.

On March 25, members of the European Parliament (MEPs) agreed to fast-track voting on the European Commission’s plan to create a bloc-wide travel pass that confirms COVID vaccination, immunity or testing status in an effort to push the rollout of certificates by June.

According to Politico, to achieve the ambitious timeline, MEPs voted to use an urgent procedure — bypassing relevant parliamentary committees, individual MEPs, debate and the need for a report.

Sophie in ‘t Veld, member of the European Parliament, wrote on Twitter that bypassing parliamentary scrutiny was an “abuse of an emergency situation” and amounted to “blackmail.”

But MEPs still voted in favor of the fast-track option by a wide margin — 468 to 203. Sixteen parliamentarians abstained.

Some in the UK are raising concerns with vaccination passports. According to an opinion piece in The Guardian, Israel, Estonia, Sweden and Denmark are all countries that have introduced, or plan to introduce, vaccine passports for domestic use — but they already have a national ID card system in place.

“If we are to follow their example, we would first need an evidence-based explanation as to how vaccine passports will help to stop the spread of the virus,” Stephanie Hare, an independent researcher and broadcaster, wrote.

Days ago in the UK it was reported that the vaccine passport was simply a “nudge” to push supposedly vaccine-hesitant young people to get the jab, but it is really a scheme that is nothing less than a national ID card by stealth, Hare wrote.

Data on vaccine passports could be used by the police, just as Singapore’s authorities admitted in January to using contact-tracing data.

Hare said “we don’t even know if vaccine passports would help stop the spread of the virus, how long immunity lasts, to what extent vaccines reduce transmission, or by how much, or whether this varies depending on which vaccine we’ve had.”

We don’t know how much such a system would cost, how we would know if it represented good value for the money or whether our resources would be better invested in other solutions. Hare said answers are needed to these questions, as well as an explanation from the government as to why it has done a U-turn on vaccine passports.

“We cannot abandon our civil liberties for such trickery,” Hare said. “Far better to address any problem of vaccine hesitancy directly. Consent implies choice. Excluding people from society unless they get vaccinated is not a real choice.”