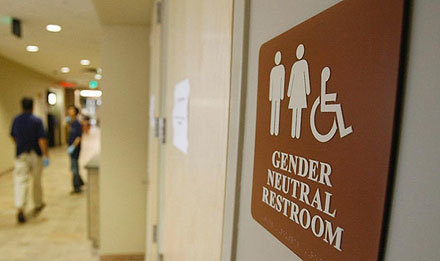 December 21, 2015 (MassResistance) – If your child’s middle school or high school doesn’t have “Transgender Awareness Month” yet, get ready. A whole new world of indoctrination is on the horizon.

It’s tempting for conservatives to say that the transgender anti-discrimination & public accommodation laws being pushed these days by the LGBT lobby are simply “bathroom bills”. Yes, they do allow cross-dressing men to go into women’s restrooms and locker rooms. But it’s really a lot more than that.

The LGBT lobby sees this as a stepping-stone — for leveraging the concept of “transgender non-discrimination” into psychologically forcing the inversion of people’s mental and emotional perception of the natural order of male and female. And they are starting with children, who are the most vulnerable to such ideas.

This past November was heralded as “Transgender Awareness Month” by the national LGBT movement. That’s not itself a new thing for them. But this year, on the heels of the “gender identity non-discrimination” initiatives around the country,  it’s being re-packaged into a major part of their movement’s assault on society. We predict that it will be soon be one of the most powerful propaganda tools in their arsenal.

Not surprisingly, the real radical part is beginning in Massachusetts. This year the huge Boston-based LGBT medical group Fenway Health (funded by millions of Mass. taxpayer dollars) rolled out their version. It is a preview of what will eventually get to the rest of the country.

Pronoun lunacy – breaking down their sense of self

When wielded by experts, words and ideas can be powerful when used on adults. But they are extremely effective with children, esecially those who are still developing their sense of identity.

The LGBT movement believes that to achieve their social-political goals, children’s’ natural sense of male/female identity must be broken down. (It also helps to break down religious beliefs and sense of family structure.) The next wave of indoctrination is to ingrain the “transgender” ideology into young minds.

The most radical things seem to start in Massachusetts.

It begins with undermining a child’s sense of common obvious pronouns — by handing out “pronoun buttons,” which are required to be obeyed by other children. A girl is now supposed to be called “he.” A boy is now a “she.” It’s very shrewd psychological manipulation.

“We must help stop discrimination”

Some children (or adults) would surely question this. So the LGBT movement shrewdly ties the concept of stopping “discrimination” into conforming to the transgender agenda — and pressuring people into changing their views. This is what your children will be hearing in their schools.

We’re living in an exciting time for transgender rights. The transgender and gender non-conforming community has made incredible strides towards visibility and equality. TV stars like Caitlyn Jenner and Laverne Cox have introduced conversations about transgender issues to thousands of living rooms. The media has told the stories of brave transgender youth who are fighting for their right to use the restrooms and locker rooms that match their gender identity. And on the political stage, public accommodations for transgender people have been the subject of much debate and legislation.

As part of this, they also insist that everyone support transgender “non-discrimination” laws. By refusing to pass these laws, they insist, pro-family people are causing “transgender people” to be unhealthy. (Actually, the opposite is true. Pandering to these behaviors causes them far more unhealthy problems than giving them legitimate psychological help.)

Moving on from just “Coming Out”

November’s newly energized “Transgender Awareness Day”  comes on the heels of their horrible and destructive “National Coming Out Day”, which takes place in mid-October in schools (and even some companies) across America. It uses psychological manipulation and peer pressure to persuade children that if they feel “different” they are actually “gay” and should internally accept that as their “identity”—who they really are, and how they were born, etc. It can have a terribly powerful effect on them. The LGBT movement is bragging that their “Coming Out” propaganda is now successful with children ages 7, 8, and 9.

“We must stop the violence”

A cornerstone of virtually all the radical demands by the LGBT movement is that people must submit, because traditional beliefs about the sexual roles “lead to violence.” The homosexual movement introduced this strategy back to 1995, and has used it successfully for 20 years. As they have admitted, “anti-violence” is merely a tool to get their agenda into place, particularly in the schools.

As the Fenway Health post begins, “This Transgender Awareness Month, we must confront the daily discrimination and violence lived by transgender people.” And that theme is repeated throughout.

It’s becoming worse than most people can imagine. Some schools are doing even more than just pushing the “transgender agenda” on vulnerable youth. They are introducing formal policies to keep parents from even knowing if their children are involved with transgender behavior.

In many of our posts MassResistance has been talking about the “War on Children”. It’s not simply an intellectual concept. It’s out in the open. It’s going on around the country. And it’s being perpetrated by very malicious people.

An immediate fight coming. In early January the Massachusetts Legislature will be voting on a “transgender anti-discrimination” bill, that will bring terrible consequences. Yes, it’s a “bathroom bill”. But as you can see, it’s so much more than that. We must confront all of it.

You can count on MassResistance to be on the front lines.