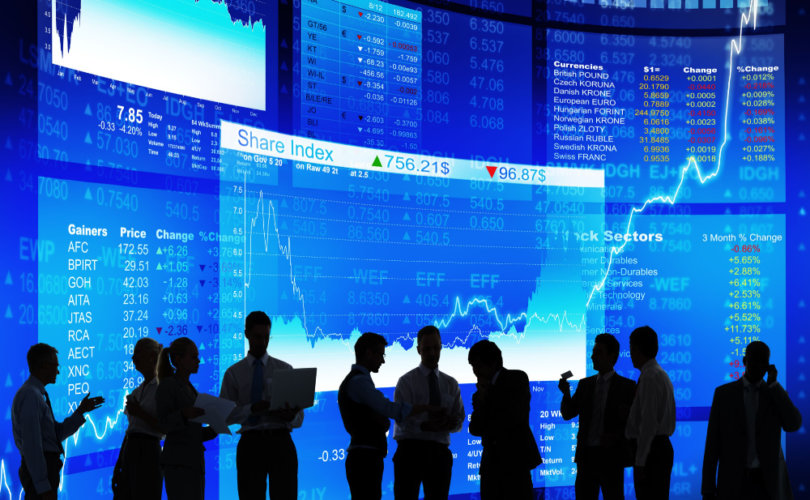 (LifeSiteNews) — Two of the most sacred tenets of a liberal economy are the notions of moral neutrality and free markets. Wall Street does not get involved in personal beliefs and mores because it is bad for business. As long as the right of property and contracts are respected, the classical liberal is unconcerned with clashing religious beliefs. In the words of Thomas Jefferson, “It does me no injury for my neighbor to say there are 20 gods or no god. It neither picks my pocket nor breaks my leg.”

Thus, the liberal businessman is only looking for sales and profits.

That is not to say that big business has always followed this economic policy. The constant trade with communist countries is an example of how big business supports immoral and oppressive regimes that pick pockets, break legs, and maintain unfree markets. When it comes to the left, big business violates its own liberal rules.

However, most businesses outside the liberal establishment try to avoid the culture wars, preferring to sell to both sides while staying out of the crossfire.

The time of moral neutrality is ending. Public companies will soon be forced to make decisions bearing on moral issues, even when they hurt their bottom lines. They will soon be violating free markets by refusing to serve carved out sectors that do not conform to leftist “moral” standards.

The threat comes from giant index funds and activist investors telling board members how to run their businesses and select their markets. Many conservatives have complained about what is called the ESG rating system. This liberal compliance tool rates companies on how they comply with environmental, social and corporate governance (ESG) targets. With the Roe v. Wade controversy, some activist stockholders are adding an A for abortion to the ESG acronym.

With the restrictions on procured abortion, more and more activists and index funds will be interrupting stockholder meetings with pro-abortion proposals. The new radicals will be breaking the liberal economic rule by introducing the culture wars into financial domains. Public companies should safeguard the interests of stockholding owners, not social justice activists who want to destroy the free market and hurt their bottom lines.

Of particular concern are the managers of giant index investment firms who can use their vast numbers of shares against corporate boards during shareholder meetings. The Big Three index funds are BlackRock, Vanguard and State Street — all suffering under “woke” management. Together they manage more than $20 trillion in assets.

The activists are framing the abortion debate in financial terms to give the appearance of propriety. For example, they are asking mainstream firms like Lowes and Walmart to compile reports evaluating the costs of restricting abortion on employee hiring and retention. Fortunately, this proposal failed with only 13 percent of votes in favor at Walmart and 32 percent at Lowes. These initial efforts signaled the will of activists to turn abortion into an economic issue in much the same way that they have weaponized environmental and diversity concerns to force companies to submit to non-economic metrics.

The suggested actions go beyond mere impact reports. With enough votes, the activists can change boards of directors or decide marketing strategies. According to a recent Wall Street Journal article (6/4-5/22), the new revolutionaries can even dictate where companies do business. Whole sectors of the nation could be cut off. Thus, activists, for example, recently asked companies to reveal if they will be closing or expanding operations in states where abortion will be banned or restricted. Such measures would destroy a free market and create ghetto zones where woke companies dare not tread. It would segregate consumers, creating a cultural apartheid system based on people’s beliefs.

Abortion promoters complain that those who defend life impose their morality upon the population. The new stockholder revolutionaries hope to impose their immoral law upon the population. They set themselves up as autocrats where the rule of sin and vice determine policy in the marketplace. The enormous power of the dollar is put at the service of those who destroy life in this new abortion apartheid regime.

The revolutionaries do not only change company policy but also distort economic reality. The effort to frame the debate in financial terms likewise imposes skewed economics on the nation. The impact of allowing children to be born does not hurt the economy. On the contrary, the economy improves. Each new child is one more American, family member, consumer, student, neighbor, friend, worker, and, most importantly, one more immortal soul for whom God has eternal and wonderful designs.

The ESG-A activists hold a strange notion of economics. What company would think it economically beneficial to kill instantly 63 million consumers who could buy their products and man their factories over a lifetime?

The ticking time bomb of declining populations is threatening the world. Indeed, companies would do well to commission studies that analyze the impact of imploding demographics on the economy. More children, not less, would safeguard stockholder interests and the common good of society. They would also discover that a moral America dedicated to virtue and respecting God’s law is also a prosperous nation blessed by Providence.