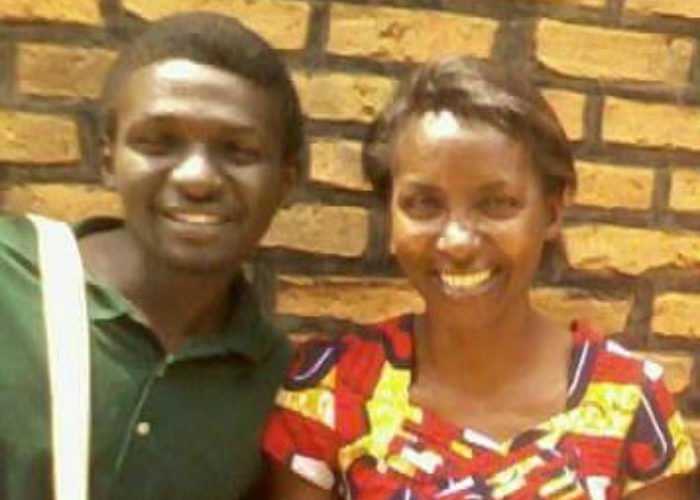 March 10, 2016 (Savethe1) — I am Claude Cyubahiro from Rwanda, Africa. I was born in 1993 — one year before the genocide which struck my country in 1994. I am now 22 years old, but going back in my history, I grew up living with my grandmother from when I was a baby up to 11 years old when she passed away in 2005. I grew up believing that she was my mother. She cared about me so much and I never asked her where my father was. Everything that I wanted, I got, and having those material needs met was followed with a lot of care and love.

I got to know my biological mother at four years old. She was sick and I went to take care of her. I spent many days helping her and getting to know her much better. Actually, she used to come to visit us at our grandmother’s house, but I didn’t know her as my mother at that time.

After the death of my grandmother, I went to live with my mother. She was married and had other kids (my brothers and a sister.) Once I moved in, I felt at home and enjoyed life with dad and mom like other kids. At that time, I took that man who was married to her as my father because I could call him dad and it was no problem.

One day he came with Mom to pick me up at school. I was in high school, in grade three. Then we stopped at a supermarket and mom got out to get some stuff. While in the car with dad he asked me, “Did your mother tell you about your dad?” I was surprised by this question and I replied “No.” Then he suggested to me, “Why don’t you ask her?” A few minutes later, mom came back and we continued on the road to home. I didn’t say anything. I didn’t even ask her about what dad said. I was just choked and confused.

I buried that story in me hoping that it was a dream, but the story came back in my head and politely I asked my mother, “Who is my dad and what is his name?” She didn’t tell me a lot about what happened, but I could quickly understand what it was all about. She wrote the name of my father on a piece of paper and gave it to me. After that, I wanted to know if anyone in his family or my father were alive so I can see them. I wanted to know who they were and was hoping that I would get a clear story from them — of how I was conceived and born, and what had happened.

With the favor of God, I did meet some members of his family and that’s where I got a clear story of my beginnings. At first my mother had told me before that my father had denied me — saying that I am not his. But the story behind it all is that my mother was a friend of my father’s. They all worked in the same company and mom was a beautiful lady with two sons — twins. My father asked her for a night out, then drugged her and raped her.

My mother later found out that she was pregnant with me. She tried to talk to my father, but he sent her away and rejected her request for help. Abortion was a consideration for my mom because she had a fiance and together they had two boys, so abortion would have been a solution to save her relationship. She was 25 years old when she was raped.

The 1977 law prohibited abortion “except when the continuance of the pregnancy seriously endangers the health of the pregnant woman,” requiring a second medical opinion and the abortion to be performed by a state physician or physician approved by the state in a public hospital or a private hospital approved by the state, but many were willing to provide abortion if a woman was raped. Sadly, in June, 2012, the law was changed in Rwanda to allow abortion in cases of rape and incest. So I was protected by Rwanda abortion law in 1993, but I know that God protected me.

At my birth, my mom went alone to the hospital to deliver me. I was born normal and healthy, so she didn’t even spend any days at the hospital.

Going back home, she passed by my father’s house and wanted to go there and drop me there. Stopping at his house, my father and his family rejected her again. They sent her out calling her a prostitute while she was carrying a baby in her arms – me, with only hours on earth.

Getting to her home, my grandmother received me and gave me a name. She said, “This baby boy who was rejected is mine.  I will raise him and he will become a man.” My life was saved in that moment, and I thank God for that gift of life!

A few months after that, the war strikes in my country – “genocide,” and my biological father who was a Tutsi was killed, along with many other members of his family. But as for me, I was with my grandmother who protected me and I survived.

Learning about all of this choked me so much. I was alone and I had no one with whom to share all of this. I even started fearing others, thinking that if they knew who I am, they would hate me for that. I felt unwanted, rejected and alone. I went into a period of deep depression, and even wanted to commit suicide. I lost all the hope that I had! I didn’t go into drug abuse during my depressed time, but I faced another kind of addiction.

When I learned about my past and got into a deep depression, I started hating myself. I couldn’t even talk to anyone — always thinking that they know “who I am” — that I was conceived in rape and that my father rejected me. My performance at school changed and my attitude did the same.

I was born into a Christian family. My grandmother helped me to become a Christian, and returning that foundation is what helped me to learn my dignity and my value — that even if I was born unwanted, rejected at birth and unplanned in the sight of my family, I now know that God loved me and he cannot reject me because He wanted me and chose for me to be born in that way so that He can proclaim His glory through me.

I started watching many documentary movies and read many books about people who overcame many struggles, and my role model is Jesus. I learned a lot from the story of Pope John Paul II, abortion survivor Melissa Ohden, and Rebecca Kiessling who was also conceived in rape. Once I knew all about my own story, I wanted to meet someone with the same one, who has the same story as mine so we can share and help each other to stand. Surprisingly, Rebecca Kiessling all the way in the United States is the first one I met. We connected through Facebook and she introduced me to many others from Save The 1. From these stories – that is how I got my hope back. I cannot feel alone anymore!

In Rwanda, children who were conceived as the result of the genocide have been called the “pregnancies of war,” “enfants non-desirés” (unwanted children) or “enfants mauvais souvenir” (bad memories children.)

I give honor to my brothers and sisters’ babies who were not born because they were aborted, or who were rejected and died. I am here to speak on their behalf! I want to become a voice for unborn and rejected babies. I want to help many babies who will pass through this situation — to give them hope and to be there for them. I want to encourage others to go against abortion no matter how the baby is conceived, in rape or in any other unwanted way.

I am currently a 2nd-year university student studying biomedical laboratory science at INES Ruhengeri, Institute of Applied Sciences, with the hope of attending medical school. I've considered medical schools outside of Rwanda, and I just got my passport approved, despite not having my biological father named on my birth certificate. By God’s favor, I just got it from the immigration office. I was asked to change the name of my father, and surprisingly, I explained my case to the caseworker in the immigration office, and after sharing my whole story, he helped me. I was able to use only my baptismal card to prove the paternity!

After knowing the truth behind my life, I decided to become a doctor where I can save many lives and stop abortion where I can, and also help those who are dying to go in peace and with hope. That is what I want to do, and I really want it very much! After asking myself why I survived, I just came out of it that God saved my life for a purpose, and I also now am compelled to save many lives, through medical assistance and through giving hope to the hopeless because I know how it feels to be hopeless.

When I asked my mom what she thinks of me now, she recited Psalm 118:22: “The stone the builders rejected has become the cornerstone; the Lord has done this and it is marvelous in our eyes. The Lord has done it this very day; let us rejoice today and be glad.” Then she told me to ask her the meaning of this verse…My mom is proud of me. She's very happy that I want to attend medical school, but also worried because she cannot help me to pay for it. Even so, I know God has a plan for my life, and I want to be used.

Claude Cyubahiro is a university student and a blogger for Save The 1 from Kigali, Rwanda.