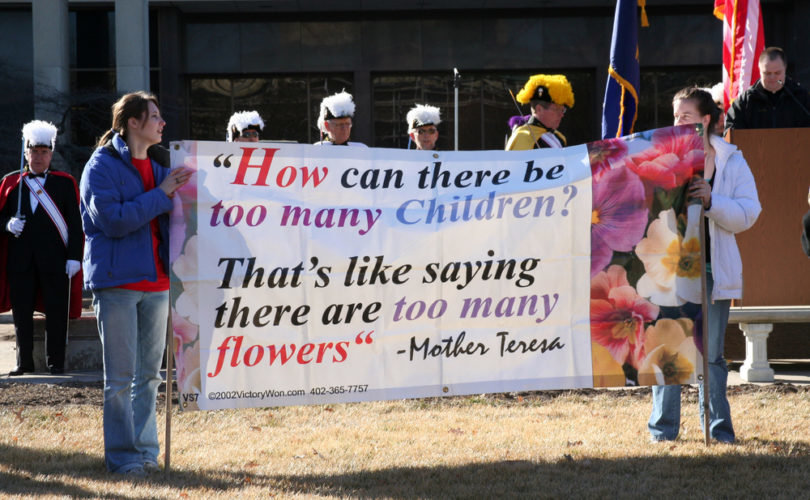 March 3, 2015 (StandTrue.com) — I sometimes find the excuses that I hear from people who claim to be pro-life but will not take action on their convictions just plain laughable.  Then there are the excuses in which people actually try and use the Word of God to justify their apathy.

One of the classic examples that can be found is the ever popular “I don’t want to offend anyone” excuse.  The worst part of this excuse is that many who use it try to justify it with scripture, often interjecting the word “offend” for the word “stumble”.  There are several verses about causing others, especially children, to stumble. For example:

1st Corinthians 10:32 Do not cause anyone to stumble, whether Jews, Greeks or the church of God—

The problem is that people seem to think that offending someone is the same as causing them to stumble; that is simply not true. If I were to sit and drink beer around someone who is an alcoholic, tempting him by offering him beer, that would be causing him to stumble.

The truth is we will offend many people just by the fact that we are Christians; this Gospel of Christ is highly offensive to those who do not have faith.

Jeremiah 6:10 To whom can I speak and give warning?  Who will listen to me?

Their ears are closed so they cannot hear. The word of the LORD is offensive to them; they find no pleasure in it.

Anytime we take a stand against an evil, someone will be offended. Those involved with evil will take offense to our speaking out against their behavior.  If we were to speak out against pornography and call it indecent or obscene that would offend those involved in the pornography industry.

If we were to give a workshop “talking about domestic violence or child abuse, would that not offend people who commit those actions?  Just because we speak out against an evil and it offends people does not mean we should stop speaking out against that evil.

Many will say that they are worried about hurting people’s feelings. Women who have committed the act of abortion will be hurt so we shouldn’t wear pro-life shirts, hold signs or pray in front of abortion mills.”  While I agree that some women will be upset when they see a pro-life t-shirt or display, that in no way justifies not taking that action.

The problem is that when it comes to abortion we have allowed this evil act to be diminished to just a “tough decision” that a woman has to make.  I am sorry but this is not a decision anyone should have the right to make; it is an act of homicide that cannot be justified.

We would never in a million years call a rape a “tough decision” that a man has to make. There are no circumstances that can justify a man sexually forcing himself on another human person.  There will be no one arguing that we just need to put ourselves in his shoes to understand why he had to make that choice.

This same standard must be applied to killing one’s child in the womb or at any other time in that child’s life.  The act of homicide is one person killing another person and that is what happens in every single abortion.

All this being said, I am not advocating going out on the street and screaming at women or calling them murderers as they walk into an abortion mill.  I have always and will always reach out to them in love and offer them hope.

While I will not be screaming at women, I will also not back down in my fight to expose what abortion is to the world.  The fact is that we need the world to view abortion as the horrific act that it is; to have the same disdain for abortion as they do for rape or any other act of homicide.

Yes, there will be times that people will be offended by the pro-life t-shirt I wear, the sign I hold or by my praying outside of an abortion mill.  There will be women who have had an abortion who will feel guilt for what they have done and probably not be happy about being reminded of their act.  I pray that the guilt they feel will lead to finding the healing and hope of Christ that exists with repentance.

This next statement at first may sound a bit harsh but it is a reality.  I am more concerned with saving the lives of innocent children being slaughtered by the thousands every day than I am with the hurt feelings of someone who has committed this act. I do not set out to offend; I set out to tell the truth.  In doing so, I know people will be offended and feelings will be hurt. This holds for almost every truth we decide to proclaim and evil we confront.

(That being said I also believe very strongly in the forgiveness and healing after abortion and would strongly recommend visiting AbortionShockwaves.com)

If you claim to be pro-life, to believe that the children dying inside these abortion mills are fully human, don’t give me excuses.  To slightly tweak a Greg Cunningham quote:  “Apathy and ignorance sustained by denial are crippling this nation’s response to abortion. When something is so horrifying that we can’t stand to look at it, perhaps we shouldn’t be tolerating it!”