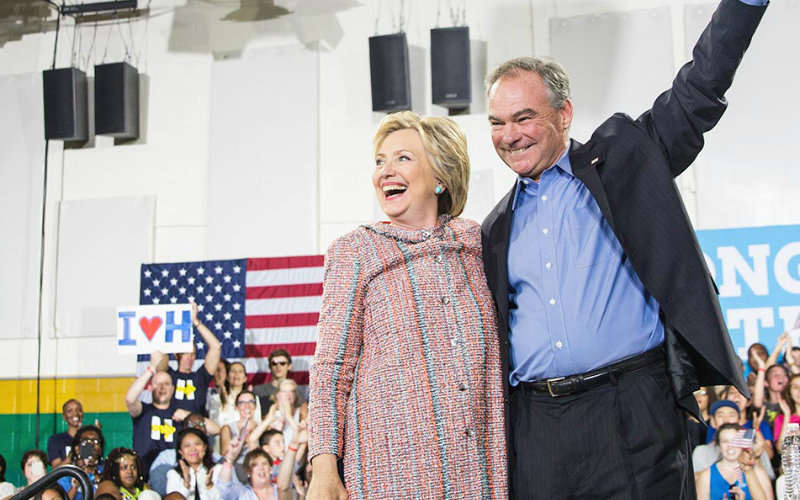 WASHINGTON, D.C., August 1, 2016 (LifeSiteNews) – Vice presidential candidate Tim Kaine’s position on the Hyde Amendment seems to have confused many people – no one more so than himself.

The Democratic Party has given mixed signals about whether Kaine supports repealing the Hyde Amendment, a 1970s-era law that prevents taxpayers from funding abortion-on-demand. Hillary Clinton has promised to strike the law off the books, a position officially adopted in the 2016 Democratic Party platform.

Initially Kaine , who once styled himself a “pro-life Democrat,” said he favored the Hyde Amendment. Then the party jumped in to “clarify.”

“He has said that he will stand with Secretary Clinton to defend a woman’s right to choose, to repeal the Hyde amendment,” Clinton campaign official Robby Mook told CNN on July 24. Two days later, Clinton spokesman Jesse Ferguson verified that Kaine’s promise to repeal Hyde had been “made privately.”

On Sunday, Kaine flip-flopped again, saying he had not changed his views at all. “That is not accurate and I don't think Robby has said that, Jake,” Kaine replied, although video footage shows Mook saying just that.

Kaine said, though, that he has gotten “comfortable with the notion that I can have my personal views but I'm going to support the president of the United States – and I will.”

We're glad @TimKaine will stand w/ @HillaryClinton to end Hyde. We must keep educating leaders on how it affects the most vulnerable women.

Once again, the abortion lobby has a better grasp of politicians’ true actions and intentions than professional observers, including some Catholic commentators.

In the minutes after Hillary Clinton named Tim Kaine her running mate, a curious consensus emerged: He was a pro-life moderate whose deep Catholic faith would balance out her abortion extremism.

Apparently, it hasn’t occurred to anyone that Hillary’s assessment that she needs a moderate is an admission that she is outside the mainstream.

It’s also not clear that a Catholic who claims to “personally” oppose abortion (but will vote to expand it) really balances out a candidate like Clinton, who said last year that “religious beliefs” that condemn abortion “have to be changed.”

Nonetheless, the day after she tapped him as a running mate, Clinton introduced Kaine in Miami, saying he has a “backbone of steel.”

“We’re going to be compañeros de alma (soul mates) in this great lucha (fight) ahead,” Kaine told the crowd.

But even by political standards, Kaine’s backbone is less a steel rod than a soft pretzel contorted in whichever direction would guarantee hs maximum personal advancement. Right now, that means supporting taxpayer-funded abortion-on-demand on a global scale.

Kaine has made a year-long retreat from his 2005 campaign for governor of Virginia, when he called himself a “conservative” on “personal responsibility” issues such as abortion, likening his position to that of President George W. Bush. But even then, his record was never especially pro-life.

He said he supported parental notification (not consent) laws…but only with a “judicial bypass,” allowing a minor to circumvent her parents’ involvement with the help of a sympathetic judge.

He also backed a ban on partial birth abortion “so long as there is an exception for the life and health of the mother.” As every pro-life advocate knows, the “health of the mother” exception has been interpreted so widely that it effectively serves as a justification for any abortion, at any time, for any reason.

By 2008, he said he still favored some restrictions, “because there’s a moral gravity” to abortion.

But four years later, Democrats for Life of America stripped him of its endorsement after he wrote that he “strongly” supports Roe v. Wade.

Since being elected to the Senate, Kaine has compiled a 100 percent voting record from Planned Parenthood and NARAL Pro-Choice America.

Most recently, he has supported the Women’s Health Protection Act, which would strike down pro-life protections from coast to coast and could force doctors and hospitals to participate in abortion.

He has backed the chemical abortion equivalent, the “Access to Birth Control Act” (S. 2960), which would require pharmacists to provide Plan B and Ella, abortion-inducing drugs, upon request, even if they have conscience objections. Violators will be fined $1,000 a day, or up to $100,000 “for all violations adjudicated in a single proceeding,” according to the bill.

Yet this self-described “traditional Catholic” has tried to invoke a version of his faith in favor of his liberal, abortion-boosting agenda. He reportedly implied that Pope Francis would not approve of defunding Planned Parenthood in the Zika aid bill. He previously cited the pontiff to oppose the partial birth abortion ban and to favor ObamaCare, which some have called “the biggest expansion of abortion funding since Roe v. Wade.”

On the campaign trail, he is now openly asking for the support of what he dubs “Pope Francis Catholics.”

Kaine will undoubtedly fool some voters, because some voters are easily fooled, and because some voters want to be fooled. Confirmation bias assures that Catholics who reject their church’s teachings on moral issues – and which issues are non-negotiable – will find their voice in Kaine.

Some Catholic figures have moved to clear up the confusion Kaine created. Bishop Thomas Tobin of Providence, Rhode Island, wrote on Facebook that Kaine holds “positions [that] are clearly contrary to well-established Catholic teachings; all of them have been opposed by Pope Francis as well…(U)nfortunately, his faith isn’t central to his public, political life.”

Other church officials have not…and will have to answer for their inaction.

When all is said and done, Tim Kaine is essentially no different than Joe Biden: a gregarious man of faith whose public votes conflict with his professed theology. Biden has not caused Catholics to rush to Obama’s side during the HHS mandate battle. Hillary promises to double down on this fight – and Kaine promises to stay out of it.

NARAL recognized Tim Kaine will be a yes-man who stands inertly by as Hillary Clinton engages in a four- (or eight-) year-long expansion of abortion never seen nor imagined in the history of the United States. As she crushes conscience, he can be counted on to stand by nodding and saluting, occasionally trotted out in front of Catholic groups to assure them that, really, this is what Pope Francis would want.

Aside from his status as a liberal Catholic and a personality that guarantees that he will never, ever overshadow her in public, it is unclear what Tim Kaine brings to the ticket.

True, he hails from the increasingly swing state of Virginia, but it is not clear he will deliver it into the Democratic column. Nate Silver estimates that the chances of Virginia putting Clinton into the Oval Office because she selected Kaine are about one in 140, or 0.7 percent.

Yes, Kaine speaks Spanish – incessantly – and will offer some appeal to Hispanic voters. But Clinton already has the support of 77 percent of Hispanics, a modern record.

What she has acknowledged as a weakness is her poor showing among working class white voters, the sort that once made up the backbone of the Democratic Party but last flocked to it under her husband, Bill Clinton.

Kaine is white and male, but that is where the similarities with such voters end. Candidates who support taxpayer-funded abortion, gay “marriage,” amnesty, gun control, nation-building in the Muslim world, free trade agreements, and oppose the Keystone XL Pipeline are unlikely to become their compañeros de alma.