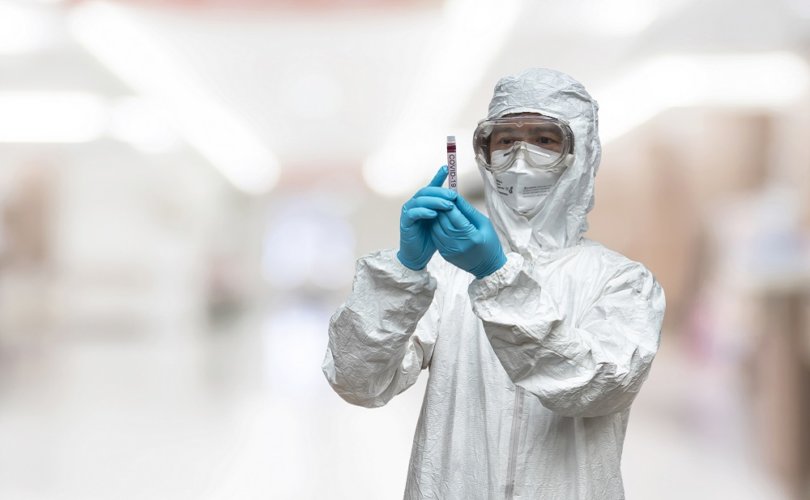 July 10, 2020 (CatholicCulture.org) — I have recently completed a major study of the confusion, difficulties and dangers in the effort to fast-track universal vaccination against Covid-19 (now in the CatholicCulture.org library).

This brief commentary is designed to highlight the issues quickly so that everyone can be aware of them, but of course I hope that many will read the entire study.

In a nutshell, then, governments worldwide are considering the following to address Covid-19:

Concerned citizens can still weigh in to affect the outcome!

In early March, 2020 the director of the World Health Organization (WHO) noted that globally, the Covid-19 death rate was about 3.4% of confirmed cases whereas the flu kills annually far less than 1% of those infected annually.

British disease modelers projected Covid-19 would kill 1.1 to 2.2 million in the United States, persuading the White House to keep Americans home to avoid its spread.

From the beginning of the epidemic, virtually every Covid-19 claim had a counter claim.

Dr. Anthony Fauci, Director of the National Institutes of Allergies and Infectious Diseases, (NIAID) said in late January, 2020 that Covid-19 should not worry Americans. By mid-March, Dr. Fauci told FOX’s Laura Ingram that Covid-19’s ability to spread was remarkable, and wouldn’t stop on its own.

Stanford University’s Dr. John Ioannidis said Covid-19 estimates could be “off” by a factor of three or 300. Early May, 2020 worldwide mortality rates ranged from 0.1 to just under 16%.

Dr. Anthony Fauci told a U.S. Senate Committee in May, 2020 that the official count of Covid-19 cases and deaths are understated. His colleague, Dr. Birx, of the President’s Corona Task force, said American healthcare facilities use a “generous definition” to decide whether or not a death was caused by Covid-19, likely causing higher death estimates.

The Mayo Clinic noted a vaccine might not be possible to develop, stating that previous SARS coronavirus vaccines improved animal survival but did not prevent the animals from contracting the disease and also caused complications.

The Trump Administration seeks to have 300 million Covid-19 vaccine doses by January, 2021. (Vaccines against Rotovirus, Human Papilloma Virus and Varicella took from 11 to 28 years to perfect.)

In the 1960’s tissue from an aborted child was used to develop a Rubella vaccine. Using cells from aborted children is now sadly common practice.

In June 2003, Cardinal Ratzinger was asked whether abortion-related vaccines may be licitly used for disease protection when civil law requires vaccination for school attendance.

The Pontifical Academy for Life (PAL) responded that parents who use such vaccines for their children are very remotely cooperating with evil not in an immoral way, but national authorities and the health systems are the ones responsible for the evil and concerned parents and others should pressure political authorities and health service providers to develop morally acceptable vaccines, and to exercise legal control of the drug companies.

Dr. Jeffrey Mirus noted that it is almost impossible to completely avoid remote material cooperation with distant evil in the course of life, and the sinful or immoral aspect occurs only if we approve of the evils involved.

Centers for Disease Control (CDC) and the Salk Polio Vaccine

The CDC and state health departments suppressed adverse reports that the Salk vaccine had been causing more polio than it was preventing as documented by Oak Park, Illinois Health Director, Dr. Herbert Ratner. Dr. Ratner’s disclosures prompted the Surgeon General to suspend polio vaccinations from May 7 to May 27, 1955, convene a nationwide Polio Surveillance Unit, and require new safety measures. Still, left-over unsafe doses were later used.

At the Surgeon Generals April 1955 meeting, a participant reported the reluctance to suspend Salk vaccine distribution because the public would conclude the vaccine should never have been released. For his trouble exposing Salk vaccine problems, Dr. Ratner was fired as editor of the Bulletin of the American Association of Public Health Physicians.

Dr. Ratner noted that 10.9 million Americans had been given the Salk vaccine cultured from monkey kidney tissues contaminated with Simian virus 40 (SV 40) which caused cancer in hamsters. The vaccine’s ill effects on the DNA of Simian Virus 40 interacting with the RNA of the Salk recipient took more than 25 years to become apparent.

Poorer nations often depend on the World Health Organization (WHO) to eradicate Tetanus. In 2014, the Kenyan Catholic Bishops questioned whether the Tetanus vaccination program supported by WHO and the Kenyan government was linked to a population control program, reported in other countries. A hormone added to the vaccine, which causes infertility and multiple miscarriages in women, was suspected.

In 2017, the results of an independent examination by university researchers in Louisiana, British Columbia, a Canadian Research organization, and Kenyan Catholic Doctors concluded that anti-fertility components were part of the WHO-administered Tetanus vaccine.

Fallout from the WHO Tetanus vaccine in Kenya continues to this day.

Comments from French scientists that Africans should be the testing laboratory for Covid-19 treatments, prompted Bishop Joseph Ndembu Mbatia to reject that proposal. The Bishop said it was wrong to treat people that way, and added that animal safety tests should be completed before human trials.

CDC doctors appear hopeful, but have still not found evidence that immunity from a future Covid-19 infection is established after contracting the disease.

As of January 2020, all 50 states have mandatory vaccine laws, with various medical exemptions, to attend school. Washington D.C. and 45 states allow religious exemptions for vaccination. Other exemptions (e.g. personal, philosophical) are allowed in 15 states.

The 1905 prevailing U.S. Supreme Court decision on mandatory vaccination, Jacobson v. Massachusetts sustained a Massachusetts law allowing a local board of health to require and enforce the vaccination and re-vaccination of all inhabitants with a penalty of $5 for non-compliance. The Court noted that compulsory vaccination has limits.

Mandatory vaccination of children to attend public or private school was held constitutional in the 1922, Zucht v. King, Supreme Court case, sustaining an ordinance passed by the City of San Antonio, Texas.

As of 2007, laws in 32 states allow health care facilities to mandate employees be vaccinated. Janice Hustvet, a 15 year employee, who assisted disabled patients, challenged the vaccination requirement of the Allina Health System. Hustvet lost her case in December, 2018.

The enforcement of mandatory vaccinations during an emergency is conditional.

New York City Mayor Bill de Blasio in 2019 ordered mandatory vaccinations in four zip codes of a Brooklyn neighborhood of Orthodox Jews to stop a measles outbreak of 285 cases. The penalty for non-compliance was $1,000.

A 1972 Science magazine editorial cautioned that mass immunization campaigns can produce widespread and significant irreversible harm if a vaccine became contaminated with an unrecognized agent such as a cancer-causing virus. Rushing to produce a Covid-19 vaccine could have similar effects.

Please urge your government representatives (see links below) to ensure that any Covid-19 vaccine complies with the following:

1
John-Henry Westen: Pope Francis is the chaplain of the New World Order
2
‘We own the science’: UN rep. admits partnering with Big Tech to censor ‘distorted information’
3
‘Brilliant’ new documentary exposes how Big Pharma and gov’t teamed up to push the COVID vaccines
4
Doctor with over 8 million YouTube followers exposes ‘dark side of birth control pill’
5
Bp. Schneider: Pope’s ‘persecution’ of the Latin Mass an ‘abuse of power’ which must be resisted
Subscribe to Daily Headlines »