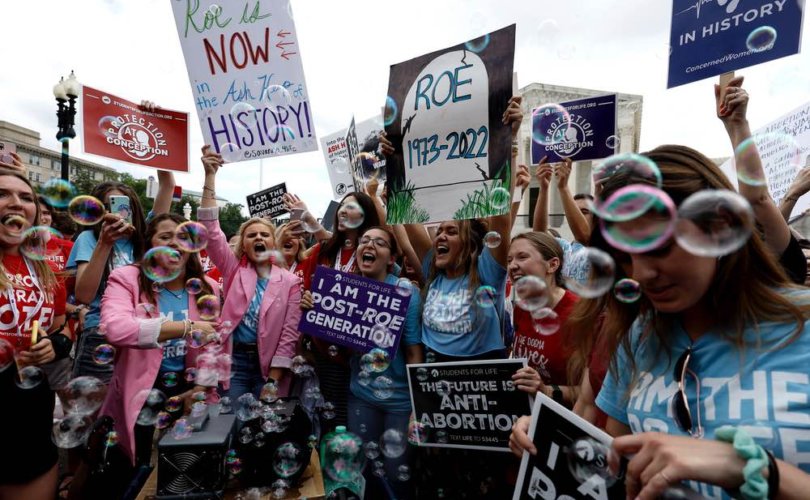 (LifeSiteNews) — The recent Dobbs decision resulted from a hard-fought legal battle that ended with the overturning of Roe v. Wade. The case was like many Supreme Court rulings that have been reversed over the years. That is how the system works, and the nation must live with the outcome.

Some less controversial topics follow this sequence. However, the abortion issue hits a high voltage wire, and the left will never be satisfied until Roe (and much more) is reinstated and imposed. The reason is that abortion is not the central issue. What is at stake in Dobbs is liberalism’s legal philosophy. If the recent ruling prevails, the whole system, the entire house of cards, is challenged. Thus, no opposition can be allowed.

Such conclusions are not hard to reach. The left is broadcasting this message to all who want to hear it. The House of Representatives is passing bill after bill to protect “rights” that have nothing directly to do with abortion—contraception, same-sex “marriage,” etc. Leftists openly say they feel threatened.

Conservatives should listen. They must avoid, above all, the position of some moderate pro-life advocates who feel the best strategy to face the enraged leftists is to “compensate” them for their loss with Dobbs and support other causes. This was the shameful strategy of the 47 GOP members of Congress who voted to codify same-sex “marriage” into federal law. The Senate is now under pressure to pass a similar abomination.

The strategy is wrong. Appeasing the left only increases its demands.

Here is the reason why.

The left’s legal and political philosophy is found in Roe’s supporting decision Planned Parenthood of Southeastern Pennsylvania v. Casey, when Justice Anthony Kennedy wrote: “At the heart of liberty is the right to define one’s own concept of existence, of meaning, of the universe, and of the mystery of human life.”

This concept holds that an individual becomes a perfect and complete being when unencumbered by strong ties to tradition, family, custom, or moral law. The more autonomous the individual, the freer that person is from unchosen obligations and constraints.

The liberal creed is that no individuals should be saddled with decisions that are not of their making. That is why liberalism gradually attacks and overthrows traditional, moral and now even biological and grammatical restraints. Judicial progressivism consists of finding and expanding “rights” to embolden individuals in their imagined, ever-expanding universe of autonomy and freedom. Thus, the LGBTQ left, for example, wants every month to be forever June with an ever-increasing alphabet of genders and causes.

Liberalism’s initial attack on Christian civilization targeted religion and tradition. For a long time, though, it maintained the appearance of an ordered society. This process accelerated immensely during the sixties when the sexual revolution toppled all social morals. The abortion decision was a key component of that process since it allowed people to destroy the consequences of their sexual immorality.

Indeed, liberals believe this progressive narrative of ever-expanding rights is an unstoppable, almost mystical Hegelian process. Every new “right” paves the way for a society liberated from dark superstition, unreason, and religion that have held humanity captive in the past. “The science” and progress will prevail. The impatient liberal is never satisfied and is always aggressively pushing forward. This judicial process will continue indefinitely, celebrating newly invented “rights” as humanity evolves to ever more autonomous states—unless something gets in the way.

Dobbs got in the way. The decision was not only about procured abortion. It unmasked the process of inventing non-existent “rights” not found in precedent, common law or the Constitution. It shines a light on the Constitution’s supposed penumbras and finds only darkness. More importantly, it exposes the farce of progressive legalism that makes a “living” Constitution say whatever the left wants.

That is what enrages the left. The twisted logic of its progressivism falls. The possibility that the process might turn back cannot be allowed because it lives on the momentum of its accomplishments.

Thus, a Supreme Court that followed all the rules of democracy is being denounced as undemocratic. Kennedy’s freedom of the individual to be whatever one wants suddenly hit a wall of reality. The hysteria of the left about all the other issues is testimony that its revolution is one and indivisible.

Dobbs can impact America’s return to a moral order immensely. The left surrounded the sexual revolution with mystical trappings that spread the message that nothing could stop this Hegelian historical process.

The Court’s decision stripped away these trappings and proclaimed that there is no mysterious and irreversible Hegelian process. It showed that it’s only the unopposed unleashing of humanity’s disordered passions. Like falling objects subject to gravity, falling faster and faster over time, so do these passions demand ever-greater license—until they are opposed and stopped.

Fallen human nature can take this process to the worst abuses and vices. The logical end is to demand that all restraints, taboos and morals be abolished. Every consensual relationship must be permitted; every unchosen obligation must be denied. Indeed, the dynamism of disordered vice already points to new barriers to be overturned, like anti-speciesism (equality between species) or even the recent rash of literature there is a “time and place” for cannibalism. Pro-abortion activists recently left graffiti at the house of pro-life attorney Thomas Brejcha indicating an ominous end goal: “No Gods, No Rulers!”

The best strategy after Dobbs is to confront the opposition and stop the process. Conservatives must apply legal brakes to keep the nation from tumbling into the abyss. This strategy is what the left fears most.

The Dobbs decision invites those involved in the pro-life fight to aim at the processes that lead to and emerge from procured abortion. It calls upon those who have gone along with the sexual revolution to stop and see the horror of where the left says things need to go and then join the resistance.

However, all must be prepared for the fury of the enraged left that will force everyone to take a position. The left will never be satisfied until the pro-life movement is crushed. Expect anything. Leftists will stop at nothing to push their agenda ahead, as seen in the vandalized pregnancy centers and Catholic churches across the nation. Dobbs’s exposing the hollowness of the leftist process only makes them more desperate.

However, trusting in God, Who has brought the pro-life movement this far, is an opportunity to attack the problem at its root: by replacing a vision of human freedom and society that is wrong and delusional with one where God is again the center and end of all things.