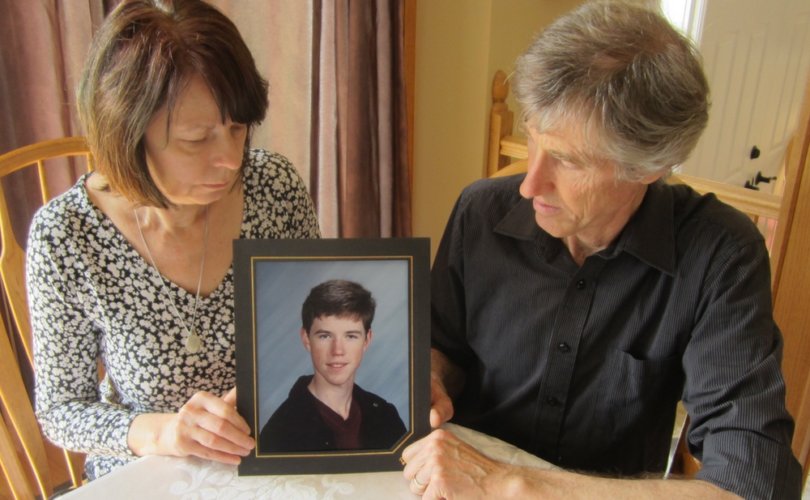 Joan and L.J. Helferty holding a photo of their deceased son Matthew.

Editor’s note:  L.J. and Joan Helferty believed they had every good reason to use contraception in their Catholic marriage. But then everything started falling apart. Their story, published exclusively on LifeSiteNews, is one of the best testimonies about the spiritual blindness that follows the sin of contraception and about the mercy of God that follows true repentance.

April 17, 2020 (LifeSiteNews) – Sunday Dec 10, 2000.  About 7:00 a.m.  A cold crisp cloudy Sunday morning.  I was the first one awake and out of bed. That was normal.  I usually stoked the furnace and got our farmhouse warmed up before calling everyone.  Mass was at 9:00.  There would be just enough time to get ready.  We had eleven children, nine at home and two older ones away at post-secondary institutions.

I had slept in this morning.  We had installed a new furnace that weekend and I was exhausted by the time we were finished on Saturday evening.  When I went downstairs into the kitchen on my way outside to the furnace, I noticed a hand-written note on the table, at the place where our 15-year old son Matthew usually sat for family meals.

Curious, I glanced at the first line.

“By the time you are reading this, I’ll already be dead.  Hey, it’s Matthew.  You’ll find my body in the front field…”

I froze. “Not possible,” I thought. This boy had everything going for him – brilliant, thoughtful, lots of friends,…  “Okay, this has to be some sort of terrible joke or experiment, because it just isn’t possible.”

I ran upstairs to his bedroom.  The bed was neatly made up.  It hadn’t been slept in. I awoke my wife and told her to call 911 and ran outside, shouting his name, hoping that he would be sitting somewhere, not able to go through with his plan. I was too late – only by minutes – he had used a hunting rifle in one decisive act.

When I returned to the house with the heart-breaking news, my wife Joan made the necessary phone calls while I sat on the kitchen steps in disbelief.

When she got off the phone, she came over to me and said, “It’s because of the tubal.”

I couldn’t believe she was saying that.

After our eleventh child was born, we had secretly arranged for Joan to have a tubal ligation.  We hadn’t told anyone because we had always professed to be in union with the Catholic Church’s teaching regarding the use of the natural cycles to limit the size of your family, if there was a serious reason to do so.

We seemed to lack the discipline to make that work for us, and we thought that we were at the point where we needed to stop having children, so we opted for tubal ligation.  Both of us went to confession afterwards, but the sacrament can’t help you much if you don’t have contrition and don’t plan to make satisfaction for the damage you have done.

The thoughtfulness and generosity of our parish priest, the police, our parish members, friends, and our funeral director became manifest as soon as the terrible news spread, and helped to sustain us through the coming days, weeks and months.  It is impossible to describe the impact suicide has on each family member, especially the parents and the closest siblings. Thankfully, in His generosity, God gave us several consolations, allowing us to be confident that Matthew’s eternal salvation was assured.

After the wake and funeral, I became driven, attempting to understand how we had lost our son in such a terrible manner.

Eventually, it became evident that Matthew had descended into deep depression and that he was listening to music on his personal CD player that would further contribute to his depression and offer the ultimate solution.  He had also been playing violent video games and a card game called ‘Magic: The Gathering’ with some of his friends. But… this explanation was incomplete.  Lots of kids listen to this terrible music and play those games and have depressing lives, but they don’t commit suicide. Matthew was part of a loving family, and we hadn’t even noticed that he was depressed, until we looked back and saw some of the obvious signs.

As the months went by, Joan continued to insist that the tubal ligation was the explanation for our loss of Matthew.

I was not convinced.

To settle the matter, we decided to visit our former spiritual director and family friend, Father Jim Duffy of Madonna House. He had called us on the day of Matthew’s death, to offer prayers and condolences.  He was perplexed that this had happened.  I agreed that I would accept that the tubal was the explanation, if Father Jim said so.  It was Divine Mercy Sunday, 2001.  When we arrived at Madonna House in Toronto – it’s a 4-hour drive from our home – Father Jim offered mass for our intentions in their chapel, then we went to a nearby restaurant & park for lunch.

When Joan told him that she had undergone a tubal ligation, he stopped eating and his countenance dropped.

He gravely explained that our experience was simply the re-telling of the stories of the Old Testament.  When the Jewish people strayed from the ways of God, when they rejected His teachings, they experienced suffering and loss.  When they realized their faults and turned back to God, their lives were restored.

But, I knew that Father Duffy, a devout and holy priest, with many decades of experience, would not mislead us.  During the drive home, we decided to arrange for a reversal of the tubal ligation and to confess this sin again, this time with true contrition.

We realize now that when we had the tubal ligation, we cut our family off from many of God’s graces and guidance and protection.  We were blind. Matthew was the one that suffered the most, and we didn’t even notice.  We are convinced that if we had been living within God’s order, either the perfect storm of circumstances and events that plunged Matthew so quickly into such deep depression would not have occurred or we would have noticed the seriousness of his condition and been able to save him.

Since the reversal and confession of that sin, our family has been blessed tremendously.   There are still lots of challenges, but sincerely attempting to live within God’s order provides spiritual protection and peace of mind that we treasure dearly.

After the reversal of the tubal ligation, we were hoping for more children, but each pregnancy ended in miscarriage. We have accepted that when you tamper with the natural law, there are natural consequences.  Nineteen years later, several of our children are married and we currently have close to 20 grandchildren.  One of our sons is a priest and one of our daughters is a Sister.  All of these things bring great joy to Joan and me.

The consequences of our sin were severe, but God has restored our lives miraculously. Deo Gratias!

We hope that by sharing our experience, we will help others to avoid the sins related to artificial contraception and sterilization. We have learned that God’s way is the best way, regardless of how difficult it may seem at the time.  Please observe the Catholic Church’s teachings regarding family planning in Humanae Vitae.  Our son’s death on December 10, 2000 was the worst day of our lives.  Divine Mercy Sunday in 2001 was indeed the day our lives were restored.