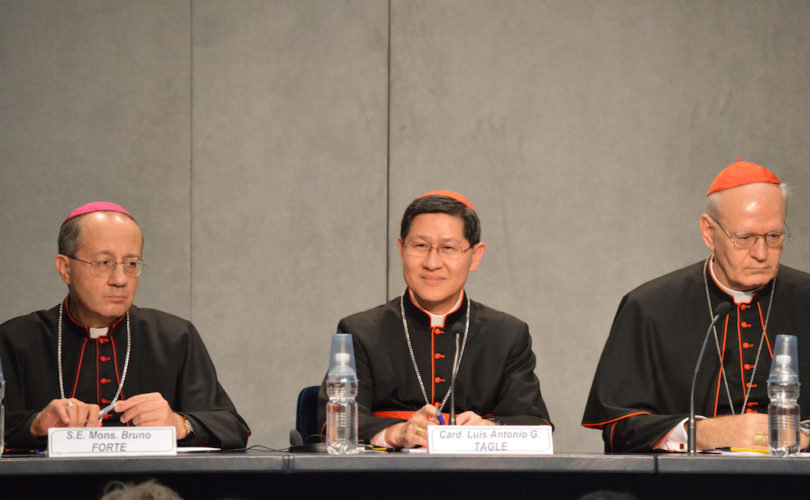 May 30, 2019 (CatholicCulture.org) — In his latest interview Pope Francis says that he does not remember whether or not Archbishop Vigano told him about Theodore McCarrick's sexual misconduct. He also insists that he knew “nothing, obviously, nothing, nothing” about McCarrick's misconduct. Those two claims do not sit comfortably side by side.

If you told me that you studied French in high school, I might not recall that fact five years later; it wouldn't stand out in my mind. But if you told me that you had wrestled a grizzly bear, whether or not I believed you, I would certainly remember the claim. Is the Pope suggesting that the news Archbishop Vigano says he conveyed — that a cardinal-archbishop had been bedding seminarians, and had been ordered by the previous Pontiff to retire from public life — would not have made a lasting impression?

Yet even that outlandish suggestion is not enough to bring the Pope's two claims into a workable alignment. Because if Archbishop Vigano had informed him, then even if the Pope somehow forgot, he could not truthfully say that he knew “nothing” about the McCarrick scandal.

Archbishop Vigano, not mincing words, made his own position perfectly clear in responding to the new papal interview: “What the Pope said about not knowing anything is a lie.”

So once again we find ourselves asking: Is Archbishop Vigano's testimony credible? Back in September, when most of the dust had settled after the first explosion of the McCarrick scandal, I summarized the available evidence and found that it weighed heavily in the archbishop's favor. (Defenders of Pope Francis have preferred not to examine that evidence, instead questioning Archbishop Vigano's motives.) Pope Francis, for his part, had refused to discuss the Vigano testimony, until during this new interview, Valentina Alazraki of the Mexican Televisa network told him that his silence had become burdensome to reporters, and he proceeded to unburden himself.

Coincidentally (or was it a coincidence?), on the same day that the Televisa interview was made public, important new evidence emerged, supplied by a cleric who could not easily be described as an enemy of the Pontiff. Msgr. Anthony Figueiredo, a former secretary to McCarrick, professed his “unswerving affection, loyalty, and support for Pope Francis,” even as he released a raft of information confirming important elements of the Vigano testimony. Msgr. Figueiredo revealed:

The Figueiredo files do not directly address the question of whether Archbishop Vigano told Pope Francis about the restrictions on McCarrick. But they do make it clear that the disciplinary action was a serious matter: the sort of topic that an apostolic nuncio (Vigano) would likely have discussed with a Pontiff (Francis) visiting the city where McCarrick lived.

But Pope Francis says that he does not remember such a conversation. Notice, again, that he does not deny that the conversation took place; he merely says that he does not recall it. That claim strains credibility — as does the claim of the Vatican press office that, in a transcript of the interview, the Pope's professed lapse of memory was omitted until reporters called attention to the omission. (A summary article on the interview, posted on the Vatican News service, barely touches on the McCarrick affair, and does not mention the memory lapse.)

In the course of the Televisa interview Pope Francis makes other assertions that should raise the eyebrows of skeptic reporters. He says that he brought the Argentine Bishop Gustavo Zanchetta to Rome, relieving him of his pastoral duties, because “the clergy didn't feel well treated by him” — not because of the abuse allegations that emerged later. He described criticisms of Cardinal Oscar Maradiaga, the chairman of the Council of Cardinals, as “calumnies” — the same claim that he made eighteen months ago about the criticism of Chilean Bishop Juan Barros, and was eventually forced to retract — while also making the much less convincing statement that “there is nothing certain” against the Honduran cardinal. And when asked about a notorious conversation with an Argentine divorcee, in which he reportedly encouraged her to receive Communion despite an illicit new marriage, the Pope again says that he does not recall the conversation, “but I must surely have said to her, 'Look, in Amoris Laetitia there is that, which you must do.” (As Chris Altieri pointed out in Catholic World Report, Amoris Laetitia was not promulgated until two years after the reported conversation.)

However, the most revealing section of the Televisa interview is the Pope's explanation of why he has remained silent, until now, about the Vigano testimony. He explains that rather than defending himself, he chose to rely on reporters to make his case for him:

And that's what you did, because you did the work, that was great, and I was very careful to say things weren't there but then, three or four months later, a judge in Milan said them when he was convicted.

The Pope's mention of the “judge in Milan” is a reference to Archbishop Vigano's legal dispute with his brother, an unfortunate matter that has absolutely no bearing on the archbishop's claims about the McCarrick scandal. Is Pope Francis revealing that he relied on the mass media to do his dirty work for him, to dig up unflattering information about his accuser, to deflect attention from the evidence? Pope Francis says that he never read Vigano's testimony in full — but he describes the archbishop's criticism as “viciousness” and seems, in one particularly confused sentence, to be implying that Vigano was paid to attack him. Thus even as he compares himself to Jesus, as the innocent and silent victim, the Pontiff launches his own vicious attack on the character of his accuser.

Archbishop Vigano, in his original bombshell testimony, said that Pope Francis was aware of, and chose to ignore, the charges against McCarrick. It is surely relevant, then, that in his own newly released testimony, Msgr. Figueiredo says that he made his evidence public only after attempting unsuccessfully, since last September, to bring that evidence to the attention of Pope Francis and other Vatican officials.

Ironically, Msgr. Figueiredo reveals that his decision to go public with his correspondence was encouraged — indirectly — by Pope Francis. In releasing his new motu proprio, Vos Estis Lux Mundi, the Pope stressed that a cover-up of abuse is itself a canonical crime, and urged anyone with information of a cover-up to come forward. So Msgr. Figueiredo came forward. “It is my hope,” he wrote, “that my openness will encourage and help other priests, religious, and seminarians, who have found themselves trapped in similar abuses of authority and cover up by bishops and superiors.” Amen to that.