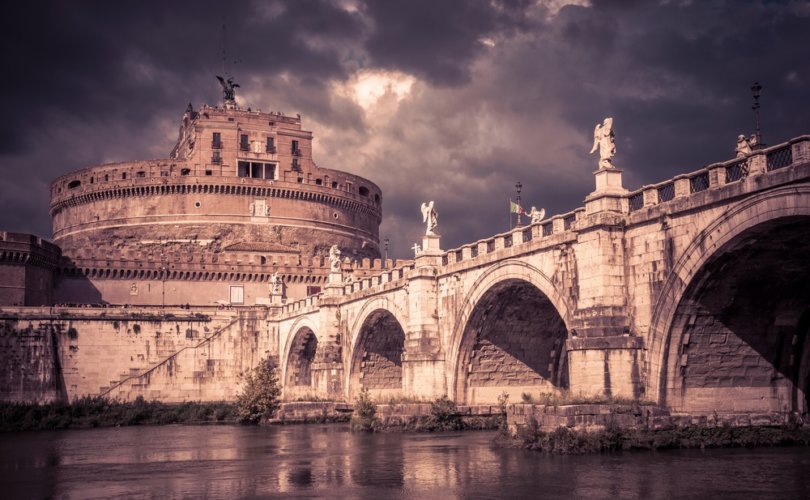 February 21, 2020 (Rorate Caeli) — An aura of mystery surrounds the Coronavirus, or Covid-19, as we don’t know either its origins or the real data of its diffusion, nor of its possible consequences. What we do know however, is that pandemics have always been considered as Divine chastisements in history and the sole remedy the Church took against them was prayer and penance.

This happened in Rome in the year 590, when Gregory of the Anicia (gens) senatorial family, was elected Pope taking the name Gregory I (540–604).

Italy was devastated by diseases, famines, social disorders and the destructive wave of the Lombards. Between 589 and 590, a violent outbreak of plague, the terrible lues inguinaria, after devastating the Byzantine territory in the East and the Frankish land in the West, had sown death and terror in the peninsula and had struck the city of Rome. The Roman citizens saw this epidemic as a Divine punishment for the corruption in the city.

The first victim the plague claimed in Rome was Pope Pelagius II, who died on February 5th, 590 and was buried in St. Peter’s. The clergy and the Roman Senate elected Gregory as his successor, who, after being praefectus urbis, lived in his monk’s cell on Montecelio. After his consecration on October 3rd, 590, the new Pope tackled the plight of the plague immediately. Gregory of Tours (538–594), who was a contemporary and chronicler of those events, recounts that in a memorable sermon delivered in the Church of Santa Sabina, Gregory invited the Romans to follow — contrite and penitent — the example of the inhabitants of Nineveh: “Look around you: behold God’s sword of wrath brandished over the entire population. Sudden death snatches us from the world, scarcely giving us a second of time. At this precise moment, oh – how many are taken up by evil — here all around us — unable even to think about penitence.”

Then the Pope exhorted [everyone] to raise their eyes to God, Who permits such tremendous punishments in order to correct His children. To placate the Divine wrath, the Pope ordered a “seven-form litany”, that is, a procession of the entire Roman population, divided into seven corteges, according to sex, age and condition. The procession moved from the various Roman churches towards the Vatican Basilica, singing litanies along the way. This is the origin of what are known as the greatest Litanies of the Church, or rogations, which we pray to God that He may defend us from adversities. The seven corteges moved through the buildings of ancient Rome, barefoot, at a slow pace, heads covered in ashes. While the multitude traversed the city, in sepulchral silence, the pestilence reached such a point of fury, that in the brief space of an hour, eighty people fell dead to the ground. However, Gregory didn’t cease for a second in exhorting the people to continue praying and insisted that the picture of the Virgin painted by St. Luke and kept in Santa Maria Maggiore, be brought to the front of the procession. (Gregorio di Tours, Historiae Francorum, liber X, 1, in Opera omnia, a cura di J.P. Migne, Parigi 1849 p. 528)

The Golden Legend by Jacopo da Varazze is a compendium of traditions transmitted from the first centuries of the Christian era and recounts that, as the Holy Image advanced, the air became healthier and more limpid and the miasma of the plague dissolved as if it couldn’t stand its presence. It reached the bridge uniting the city to the Hadrian Mausoleum, known in Medieval times as Castellum Crescentii, when all of a sudden a chorus of Angels could be heard singing “Regina Coeli, laetare, Alleluja — Quia quem meruisti portare, Alleluja — Resurrexit sicut dixit, Alleluja!” Gregory responded in a loud voice: “Ora pro nobis rogamus, Alleluja!” And so the Regina Coeli was born, the antiphon the Church greets Mary the Queen with, during Eastertide, for the Resurrection of the Saviour.

After the singing, the Angels settled themselves in a circle around Our Lady’s picture and Gregory, raising his eyes, saw at the top of the Castle, an Angel, who, after drying his sword dripping with blood, put it back in its sheath, as a sign that the punishment was over. “Tunc Gregorius vidi super Castrum Crescentii angelum Domini qui glaudium cruentatum detergens in vagina revocabat: intellexitque Gregorius quod pestis illa cessasset et sic factum est. Unde et castrum illud castrum Angeli deinceps vocatum est”. (Iacopo da Varazze, Legenda aurea, Edizione critica a cura di Giovanni Paolo Maggioni, Sismel-Edizioni del Galluzzo, Firenze 1998, p. 90).

Pope Gregory I was canonized, proclaimed Doctor of the Church and went down in history known as the “Great”. After his death the Romans began calling the Hadrian Mausoleum “Castel Sant’Angelo” and, in remembrance of the miracle, placed at the top of the castle, the statue of St. Michael, head of the heavenly militia, in the act of sheathing his sword. Still today in the Capitoline Museum a circular stone with foot-prints is kept, which according to tradition, had been left by the Archangel when he stood to declare the end of the plague. Also Cardinal Cesare Baronio (1538–1697), considered one of the greatest historians of the Church for the rigor of his research, confirms the apparition of the Angel on top of the castle. (Odorico Ranaldi, Annali ecclesiastici tratti da quelli del cardinal Baronio, anno 590, Appresso Vitale Mascardi, Roma 1643, pp. 175-176)

We note only that if the Angel, thanks to the appeal of St. Gregory, sheathed his sword, it means that it had been first drawn to punish the sins of the Roman people. The Angels in fact are the executors of divine punishments on people, as the dramatic vision of the Third Secret of Fatima reminds us, by calling us to repentance: “an Angel with a flaming sword in his left hand; flashing, it gave out flames that looked as though they would set the world on fire; but they died out in contact with the splendor Our Lady radiated towards him from her right hand: pointing to the earth with his right hand, the Angel cried out in a loud voice ‘Penance, Penance, Penance!’”

Is the spread of the Coronavirus related in some way to the vision of the Third Secret? The future will tell us. However the appeal to penance remains of prime urgency for our age and the prime remedy to guarantee our salvation, in time and eternity. The words of St. Gregory the Great must resound again in our hearts: “What will we say of the terrible events of which we are witnesses if not that they are predictions of a future wrath? Think then dearest brothers, with extreme care to that day, correct your lives, change your habits, defeat with all your might the temptations of evil, punish with tears, sins committed” (Omelia prima sui Vangeli, in Il Tempo di Natale nella Roma di Gregorio Magno, Acqua Pia Antica Marcia, Roma 2008, pp. 176–177).

It is these words, not the dream of Amazzonia felix, that today are needed in the Church which appears the way St. Gregory described it in his times: “A very old ship, horrifically gashed; waves and rotted planks getting in everywhere; shaken everyday by a violent tempest, foreshadowing a shipwreck (Registrum I, 4 ad Ioann. episcop. Constantinop.)”. But way back then Divine Providence called forth a helmsman, who, as St. Pius X states: “amid the raging waves was able not only to dock in the harbor, but also secure the ship from future storms” (Enciclica Jucunda sane del 12 marzo 1904).