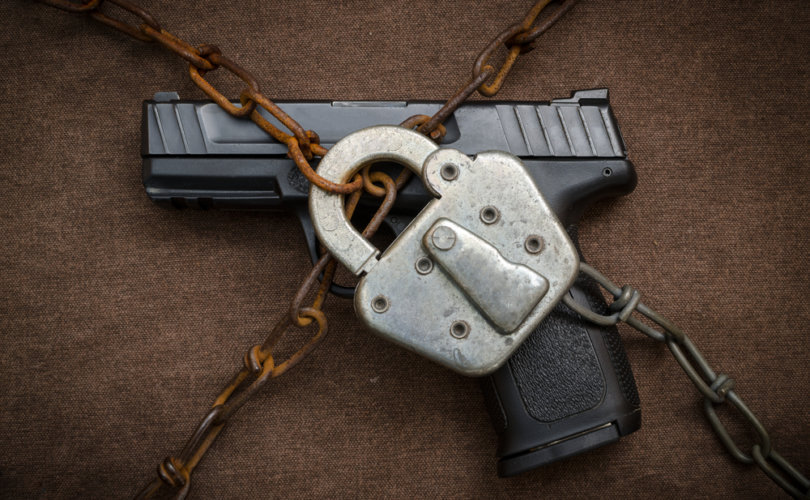 Note from LifeSiteNews president Steve Jalsevac: Gun control is not an issue LifeSite normally covers, but considering the COVID-related trend towards dangerous tyranny in many nations at this time it is an issue that conservative should pay attention to. That is because every formation of a totalitarian state has historically always been preceded by controls and then confiscation of guns, after which began violent government actions against defenseless citizens who oppose the state ideology. The United States Constitution is unique in that it mandates the right for all citizens to bear arms for the explicit purpose of allowing them to resist those who would attempt to remove their God-given rights enunciated in the U.S. Constitution. We are of course not advocating the taking up of arms, but warning that attempts to unjustly or unreasonably confiscate firearms should be resisted.

(WND News Center) – It was Rep. Michael Cloud, R-Texas, who just days ago warned of the possibility of an illegal national gun registry being assembled by Joe Biden’s Bureau of Alcohol, Tobacco and Firearms.

Cloud said the “notably corrupt” agency was managing the feat by acquiring nearly a billion gun transfer records – so far.

Cloud expressed concern those details could be exploited by Biden to surveil American gun owners, even while working to ban weapons.

Now John R. Lott Jr., the president of the Crime Prevention Research Center and formerly an adviser for the U.S. Department of Justice’s Office of Legal Policy, claims it is worse than that.

In a column at Real Clear Politics, he explained not only federal officials “will have the name of everyone who legally obtained a gun,” but Joe Biden now “wants to make universal background checks nationwide so he can have an even more complete registration list.”

“According to a Rasmussen Reports survey, Democrats support the idea by a 2-1 ratio, while Republicans oppose it by a similar margin,” wrote Lott. “Two-thirds of Republicans believe the policy will lead to gun confiscation, and even 40% of Democrats believe the same. Confiscating legally owned firearms, it seems, is not merely a right-wing conspiracy theory,” he warned.

“Similarly, a recent Gallup poll shows that 40% of Democrats want a complete ban on civilian ownership of handguns. Countries such as Canada, the U.K., and Australia aren’t the only ones to use registration to ban and confiscate guns. California, Chicago, and Washington, D.C. have also used registration to know who legally owned different types of guns before banning them.”

He explained that gun control activists always “push for registration as a way to solve crime,” but that’s not necessarily what happens.o agree to our Privacy Policy and Terms of Use.

“In a 2001 lawsuit, the Pennsylvania state police could not identify any crimes solved by their registration system from 1901 to 2001; however they did claim that it had ‘assisted’ in a total of four cases, for which they could provide no details,” he said.

Additionally, “In a 2013 deposition for District of Columbia v. Heller II, the plaintiffs recorded that the Washington, D.C. police chief could not ‘recall any specific instance where registration records were used to determine who committed a crime, except for possession offenses’.”

He added that, “During testimony before the Hawaii State Senate in 2000, Honolulu’s police chief stated that he couldn’t find any crimes that had been solved due to registration and licensing.”

Lott noted how, while New York and Maryland had spent “tens of millions of dollars putting together a computer database on all new guns sold in the past 15 years, even recording the ballistic fingerprint of each gun,” those states “eventually abolished their systems because they never solved a single crime.”

“Why do Democrats keep pushing a policy that costs so much and has no crime-reducing benefits?” he wondered.