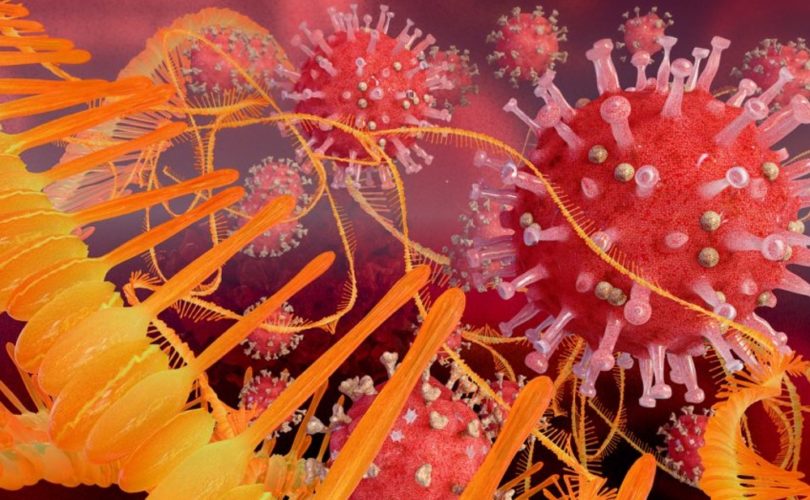 April 9, 2021 (Children’s Health Defense) — Over the past year, it would be all but impossible for Americans not to notice the media’s decision to make vaccines the dominant COVID narrative, rushing to do so even before any coronavirus-attributed deaths occurred.

The media’s slanted coverage has provided a particularly fruitful public relations boost for messenger RNA (mRNA) vaccines — decades in the making but never approved for human use — helping to usher the experimental technology closer to the regulatory finish line.

Under ordinary circumstances, the body makes (“transcribes”) mRNA from the DNA in a cell’s nucleus. The mRNA then travels out of the nucleus into the cytoplasm, where it provides instructions about which proteins to make.

According to the Centers for Disease Control and Prevention (CDC) and most mRNA vaccine scientists, the buck then stops there — mRNA vaccines “do not affect or interact with our DNA in any way,” the CDC says. The CDC asserts first, that the mRNA cannot enter the cell’s nucleus (where DNA resides), and second, that the cell — Mission-Impossible-style — “gets rid of the mRNA soon after it is finished using the instructions.”

A December preprint about SARS-CoV-2, by scientists at Harvard and Massachusetts Institute of Technology (MIT), produced findings about wild coronavirus that raise questions about how viral RNA operates.

The scientists conducted the analysis because they were “puzzled by the fact that there is a respectable number of people who are testing positive for COVID-19 by PCR long after the infection was gone.”

Their key findings were as follows: SARS-CoV-2 RNAs “can be reverse transcribed in human cells,” “these DNA sequences can be integrated into the cell genome and subsequently be transcribed” (a phenomenon called “retro-integration”) — and there are viable cellular pathways to explain how this happens.

According to Ph.D. biochemist and molecular biologist Dr. Doug Corrigan, these important findings (which run contrary to “current biological dogma”) belong to the category of “Things We Were Absolutely and Unequivocally Certain Couldn’t Happen Which Actually Happened.”

The findings of the Harvard and MIT researchers also put the CDC’s assumptions about mRNA vaccines on shakier ground, according to Corrigan. In fact, a month before the Harvard-MIT preprint appeared, Corrigan had already written a blog outlining possible mechanisms and pathways whereby mRNA vaccines could produce the identical phenomenon.

In a second blog post, written after the preprint came out, Corrigan emphasized that the Harvard-MIT findings about coronavirus RNA have major implications for mRNA vaccines — a fact he describes as “the big elephant in the room.” While not claiming that vaccine RNA will necessarily behave in the same way as coronavirus RNA — that is, permanently altering genomic DNA — Corrigan believes that the possibility exists and deserves close scrutiny.

In Corrigan’s view, the preprint’s contribution is that it “validates that this is at least plausible, and most likely probable.”

As the phrase “reverse transcription” implies, the DNA-to-mRNA pathway is not always a one-way street. Enzymes called reverse transcriptases can also convert RNA into DNA, allowing the latter to be integrated into the DNA in the cell nucleus.

The preliminary evidence cited by the Harvard-MIT researchers indicates that endogenous reverse transcriptase enzymes may facilitate reverse transcription of coronavirus RNAs and trigger their integration into the human genome.

The authors suggest that while the clinical consequences require further study, detrimental effects are a distinct possibility and — depending on the integrated viral fragments’ “insertion sites in the human genome” and an individual’s underlying health status — could include “a more severe immune response … such as a ‘cytokine storm’ or auto-immune reactions.”

In 2012, a study suggested that viral genome integration could “lead to drastic consequences for the host cell, including gene disruption, insertional mutagenesis and cell death.”

Corrigan makes a point of saying that the pathways hypothesized to facilitate retro-integration of viral — or vaccine — RNA into DNA “are not unknown to people who understand molecular biology at a deeper level.”

Even so, the preprint’s discussion of reverse transcription and genome integration elicited a maelstrom of negative comments from readers unwilling to rethink biological dogma, some of whom even advocated for retraction (though preprints are, by definition, unpublished) on the grounds that “conspiracy theorists … will take this paper to ‘proof’ that mRNA vaccines can in fact alter your genetic code.”

More thoughtful readers agreed with Corrigan that the paper raises important questions. For example, one reader stated that confirmatory evidence is lacking “to show that the spike protein only is expressed for a short amount of time (say 1-3 days) after vaccination,” adding, “We think that this is the case, but there is no evidence for that.”

In fact, just how long the vaccines’ synthetic mRNA — and thus the instructions for cells to keep manufacturing spike protein — persist inside the cells is an open question.

Ordinarily, RNA is a “notoriously fragile” and unstable molecule. According to scientists, “this fragility is true of the mRNA of any living thing, whether it belongs to a plant, bacteria, virus or human.”

But the synthetic mRNA in the COVID vaccines is a different story. In fact, the step that ultimately allowed scientists and vaccine manufacturers to resolve their decades-long mRNA vaccine impasse was when they figured out how to chemically modify mRNA to increase its stability and longevity — in other words, produce RNA “that hangs around in the cell much longer than viral RNA, or even RNA that our cell normally produces for normal protein production.”

It is anyone’s guess what the synthetic mRNA is doing while it is “hanging around,” but Corrigan speculates that its enhanced longevity raises the probability of it “being converted over into DNA.”

Moreover, because the vaccine mRNA is also engineered to be more efficient at being translated into protein, “negative effects could be more frequent and more pronounced with the vaccine when compared to the natural virus.”

Corrigan acknowledges that some people may dismiss his warnings, saying “If the virus is able to accomplish this, then why should I care if the vaccine does the same thing?”

He has a ready and compelling response:

“[T]here’s a big difference between the scenario where people randomly, and unwittingly, have their genetics monkeyed with because they were exposed to the coronavirus, and the scenario where we willfully vaccinate billions of people while telling them this isn’t happening.”

Unfortunately, the prevailing attitude seems to be that the “race to get the public vaccinated” justifies taking these extra risks.

In mid-November, after the Jerusalem Post told readers that “when the world begins inoculating itself with these completely new and revolutionary vaccines, it will know virtually nothing about their long-term effects,” an Israeli hospital director argued that it’s not worth waiting two more years to ferret out mRNA vaccines’ “unique and unknown risks” or potential long-term effects.

In the U.S., enthusiasm for mRNA technology is similarly unfettered. Just a few days after the CDC released updated data showing that more than 2,200 deaths of individuals who had received either the Pfizer or Moderna mRNA vaccines had been reported as of Mar. 26 , The Atlantic praised the technology, suggesting that the “ingenious” synthetic mRNA technology behind Pfizer’s and Moderna’s COVID vaccines represented a “breakthrough” that could “change the world.”

Rather than dismiss the prospect of retro-integration of foreign DNA as a “conspiracy theory,” scientists should be conducting studies with the mRNA-vaccinated to assess actual risks.

For example, Corrigan believes that while in vitro data in human cell lines (one of the data sources examined by the Harvard-MIT researchers) offer “air tight” results, there is still a need to conclusively demonstrate real-life genomic alteration through “PCR, DNA sequencing or Southern Blot … on purified genomic DNA of COVID-19 patients” — and vaccinated individuals.

Yet instead of addressing these research gaps, companies are salivating over the potential to use human-edited mRNA to “commandeer our cellular machinery” and “make just about any protein under the sun.”

A March 10 press release pronouncing mRNA vaccines the clear winners of the COVID-19 vaccine race noted that all major pharmaceutical companies are now “testing out the [mRNA] technology by entering into license agreements and/or collaboration with well-established RNA companies.”

Judging by pharmaceutical company executives’ willingness to overlook mRNA vaccines’ long-term — and possibly multigenerational — risks, they must be similarly entranced by dollar-sign visions of a never-ending pipeline of “plug and play” mRNA products.