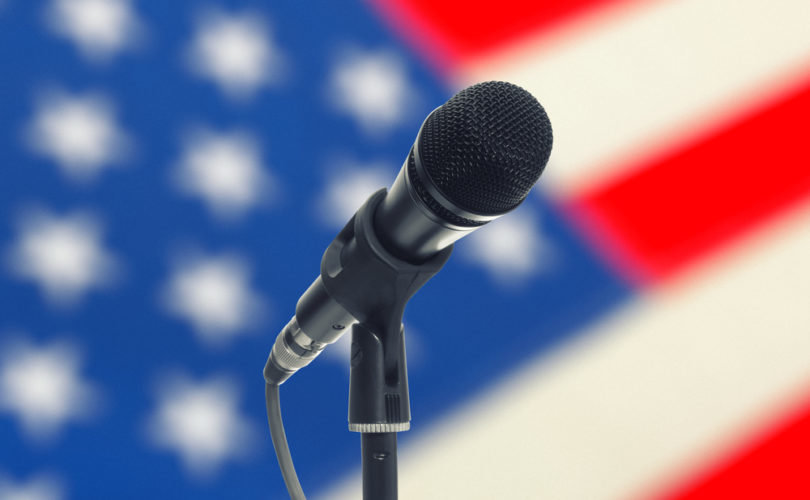 November 23, 2018 (American Thinker) – I have yet to hear anyone explain what Donald Trump means by “fake news” being the “enemy of the people.”

I have this dream that Trump will punch back at the media by explaining – maybe in a fireside chat or directly from the Oval Office – that freedom of the press is fundamental to American culture and spirit. It has allowed this country to overcome political and cultural blemishes and rise above and beyond the Founders' expectations. With the rest of the Bill of Rights, freedom of the press has played a significant role in this nation's maturation into the beacon of hope, liberty, and commercial success it has become.

The press is an unofficial check on all three political branches of government at the local, state, and federal levels. At its core, it is freedom from Congress making laws abridging freedom of the press. However, it is not unfettered; it has limits, just like our freedoms of speech, religion, and assembly.

Long before Trump, the American people have been manipulated by “fake news” – intentionally misleading reportage – and have complained about press bias. When news output was dominated by three networks and a handful of newspapers, people had little choice. But as more Americans resented being force-fed “fake news,” they turned away from it. Eventually, talk radio and the internet filled the gap, sprouting nontraditional news delivery systems and giving voice to journalists who refused to toe the Democratic party line. But for these developments, America would still be a one-horse media town with the news colored by the Democratic-Media Complex.

Half of this country knows that this is wrong but won't stand up against this blatant misuse of the press because half the country benefits from it. The other half is disgusted.

At a recent White House press conference, CNN's Jim Acosta challenged the president's characterization of the caravan as an invasion. When President Trump attempted to engage the next reporter, Acosta bombastically continued to speak at and over the president and refused to hand over the mic to a young female aide, whose arm he aggressively pushed away. Not only was this inappropriate conduct unbefitting a journalist toward a White House aide and a president, but the Washington Post skewed its reporting as “Trump Insults Reporters, Claims Acosta Video Wasn't Altered.”

The article doesn't address Acosta's aggressive posturing and hubris or his repeated interruptions and confrontational attitude toward the president – all of which, together with Acosta's physical response to the aide, prompted Trump's “insults” (or candor).

Then the left-wing press accused the video of being doctored. According to BuzzFeed:

There's no evidence that the video was deliberately sped up[.] … Th[e] video analysis … demonstrates what the GIF conversion process does to video. While it's not technically “sped up” by intent, it effectively is in practice.

This is the kind of fake news that permeates the media and impacts hundreds of millions of people daily.

Again, press freedom is not unfettered but curtailed by honesty regarding the reported facts. Opinion must be identified as such. Today, opinion masquerades as real news. The press has a duty to truthfully report the facts. Failure to do so is a breach of the press's duty to the people. When the press advocates for a political party, candidates, or elected officials, or promotes the agenda of a particular political party, it becomes an arm of the government or that political party. It then loses any objectivity and no longer complies with its constitutional duty to the American people, effectively becoming the enemy of the people.

With over 85% of journalists supporting and identifying as Democrats, there is very little one can do to combat the cancer of fake and biased news. The only treatment is sunlight. In the past, presidents would take the high road and ignore the sins of the press, believing that Americans would see through the charade and reject traditional news outlets, and this decrease in consumption would stop the bias. While millions did reject the media, the press pushed on with its agenda. The media attacked President George W. Bush as a liar and warmonger; they defamed the Tea Party as radicals and Nazis; they assaulted every Republican candidate from Sarah Palin to Mitt Romney as racists, misogynists, and xenophobes.

With the election of Trump, this bias has reached hysterical heights. The press no longer feigns objectivity, but has openly declared war on the Trump administration, contorting the news to suit a narrative. Reporters feel justified unabashedly lying and misrepresenting facts because they believe that Trump is a loathsome person whose policies are bad for America. They blindly insist they know what's best.

Trump was elected to fight back against this kind of abuses, and sometimes, it isn't pretty. In order to protect the freedoms enumerated in our Constitution and restore a robust but truthful freedom of the press, we have to expose and combat the fake news. The press naturally doesn't like that because it requires reporters to put their sports announcer hats on when they really want to be players. The Democrats don't like it because they lose their monopoly and stranglehold on the truth. If you think making sausage in Congress is messy, exposing the Democrat-Media Complex will continue to unearth the filthiest slop imaginable.

President Trump provides much needed sunlight. This is the right place to take a stand – it is why he was elected, and it involves his duty to protect the Constitution and to work on behalf of the American people. Like it or not, as long as the press assaults the truth, it is the enemy of the people. These reporters are free to challenge the president and criticize his administration, but not to pick and choose which facts to omit in order to promote a particular political agenda or party.

This is a fight for the essence, the soul of this country by restoring one of our fundamental freedoms to its purest form: the truth. None of us should rest until the American people can have faith that when the press speaks, it speaks as a legitimate fourth check on the three branches of government and not as an arm of the Democratic Party or its elected officials.