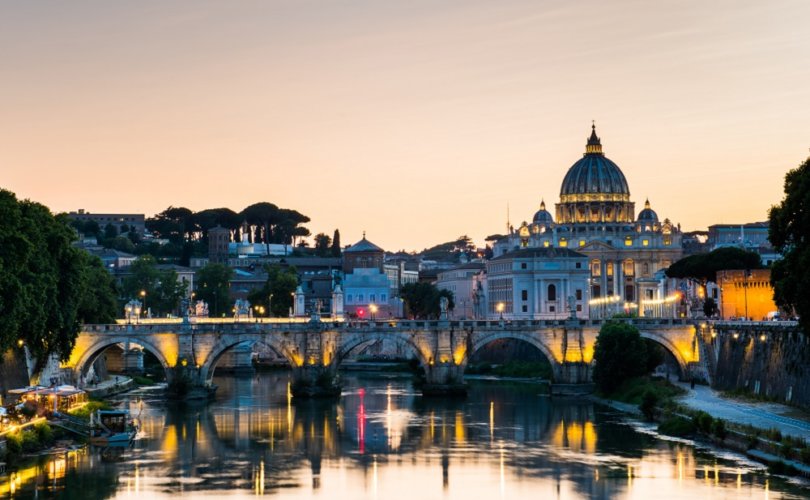 July 16, 2020 (Rorate Caeli) — On his blog Settimo Cielo of July 13, the Vatican reporter Sandro Magister was highly critical of Bishops Carlo Maria Viganò and Athanasius Schneider, hurling an accusation at them for spreading “fake news”. *

The term “fake news” was used also in reference to Monsignor Schneider’s theses, whereby the Church, in Her history, has corrected doctrinal errors committed by precedent ecumenical councils, without, in this manner, “undermining the foundations of the Catholic faith.” Magister accuses Schneider of historical incompetence, citing, as evidence, a brief intervention by Cardinal Walter Brandmüller on the Council of Constance, which in reality refutes nothing of what was affirmed by Monsignor Schneider.

The facts are these. On April 6, 1415, the Council of Constance issued a decree known as Haec Sancta 1, wherein it was stated solemnly that the Council, assisted by the Holy Spirit, received its power directly from God: hence every Christian, including the Pope, was required to obey it. Haec Sancta is a revolutionary document which raised many questions as it was first interpreted in continuity with Tradition and, subsequently, reprobated by the Pontifical Magisterium. It had its coherent application in the decree Frequens, of October 9, 1417, which called for a Council five years later, after seven years another one and then one every ten years, de facto attributing to the Council the function of a permanent collegial body, alongside the Pope and de facto superior to him.

Cardinal Brandmüller notes that: “the assize which issued those decrees was in no way an ecumenical council authorized to define the doctrine of the faith. It was, instead, merely an assembly of the followers of John XXIII (Baldassarre Cossa), one of the three “popes” contending at that time for the leadership of the Church. That assembly had no authority. The schism lasted until the council of Constance unified with the other two parties, i.e. the followers of Gregory XII (Angelo Correr) and the ‘natio hispanica’ of Benedict XIII (Pedro Martinez de Luna), an event that occurred in the autumn of 1417. Only then did the ‘council’ of Constance become a true ecumenical council, even if still without a pope, who eventually was then elected.”

All true, but Martin V, elected ‘the true’ Pope in Constance on November 11, 1417, in the Bull Inter cunctas of February 22, 1418, acknowledged the ecumenical nature of the Council of Constance and all that it had decided in the previous years, albeit with a generically restrictive formula: «in favorem fidei et salutem animarum». 2 He therefore did not repudiate Haec Sancta and applied the decree Frequens with rigour, fixing the date of a new general Council, which was held in Pavia-Siena (1423–1424) and the city of Basil he designated as the seat of the subsequent assembly.

The Council was opened in Basil on July 23, 1431. Martin V’s successor, Eugene IV, with the Bull Duduum Sacrum of December 15 1433, ratified the documents that the assembly had issued hitherto, among which was the Haec Sancta the “conciliar” Fathers of Basil had proclaimed as their magna carta.

Subsequently, in the letter Etsi dubitemus of April 21 1441, Eugene IV condemned the “diabolical founders” of the conciliarism doctrine: Marsilius of Padova, John of Jandun and William of Ockham 5 , but regarding Haec Sancta he took a hesitant stance, along the lines of the “hermeneutic of continuity”. The same Eugene IV ratified the Council of Constance in its entirety, and its decrees, «absque tamen praejudicio juris, dignitatis et praeminentiae Sedis apostolicae» as he writes on July 22, 1336 to his legate: a formula that clarified the sense of Martin V’s restriction, condemning implicitly, in the name of the Primacy of the Roman Pontiff, all those who referred to the Council of Constance in affirming the superiority of the council over the Pope.

Consequently the thesis of “continuity” between Haec Sancta and the Tradition of the Church was abandoned by theologians and historians, and among them Cardinal Brandmüller, who rightly expunges Haec Sancta and the decree Frequens from the Tradition of the Church. Even at the time of the Counter-Reform, Father Melchor Cano states that Haec Sancta should be rejected as it did not have the dogmatic form of a “decree obliging the faithful to believe or condemn the contrary”6 . Similarly, Cardinal Baudrillart, in the Dictionnaire de Théologie Catholique, retains that the Council of Constance, in issuing Haec Sancta did not have the intention of promulgating a dogmatic definition, and it is also for this the document was subsequently repudiated by the Church.7 The Church historian August Franzen affirms the same.8 Thereby, in raising the question of the ecumenical nature of the Council of Constance, Father Joseph Gill, one of its foremost experts, writes that: «les historiens s’accordent à le considérer comme oecuménique, mais dans des proportions variables». 9

Why exclude then that a day will come when even the Second Vatican Council may be repudiated, in part, or en bloc, as happened with the Council of Constance and its decrees?

Published with permission from Rorate Caeli.