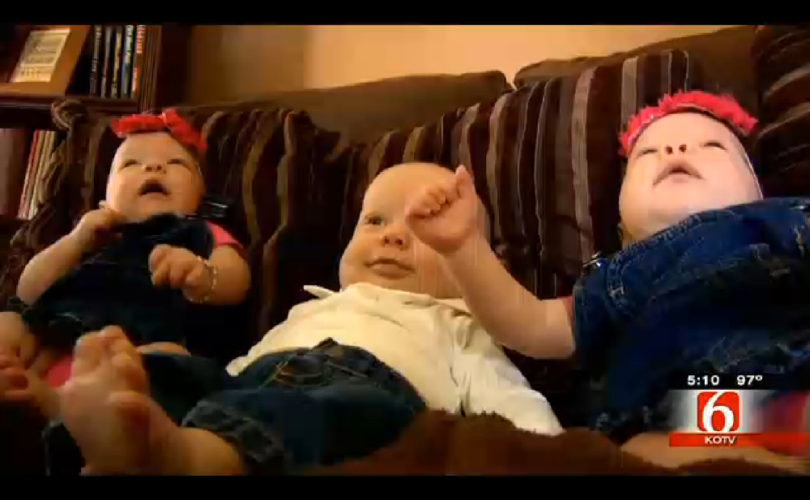 (LiveActionNews) – An adorable and surprising story is making its way through Facebook pages today. It’s the story of a Tulsa, Oklahoma couple – Andy and Sarah Justice, who had a longing in their heart to have children but struggled to conceive. After three and a half years, Andy and Sarah decided to go to a specialist, but the treatment was too expensive. Instead they went in a different direction and contacted an adoption agency connected to a faith-based Crisis Pregnancy Center.

In the adoption process, the birth mother got to choose the family she wanted her child to go to. Andy and Sarah were happy when they got a call from a mom letting them know she had selected them. Sarah began bonding with the mom by taking her to her doctor appointments. At an ultrasound appointment they all received an amazing surprise. The doctor told them the birth mom was carrying triplets.

Andy told Oklahoma’s News on 6 that his response was, “Well, that’s great, you said you wanted kids.”

On May 18, Joel, Hannah, and Elizabeth were welcomed into the Justice family.

That in itself makes for a great happy ending. Yet the Justice family had more in store for them. Just one week after the triplets were born, Sarah found out she was pregnant with twins! Sarah and Andy are now expecting a girl and boy this coming January.

Andy and Sarah are beyond happy with the news. Sarah summed it all up by saying, “God has a great sense of humor.”

This story delights my heart for a number of reasons. Andy and Sarah could have just given up on their dream of having a family. Instead they reached out to help another woman in need. Little did they know that they would end up having their own prayers answered in a spectacular way. This story is also a positive example of the influence of Crisis Pregnancy Centers in our nation. CPCs are not just for women who are dealing with an unplanned or crisis pregnancy. They are also safe places for help parents who are interested in adoption or foster care. CPCs meet the needs of families in a number of helpful ways.

Reading this heartwarming story isn’t enough. You have to see their adorable triplets in this beautiful video interview with Andy and Sarah. Hope it puts a smile on your face.

Christina Martin has been a pro-life voice for eight years. Her work began after her mother confessed she paid a doctor to abort her, but walked out before he could. Knowing she was saved from death, she wanted to fight for others. After graduating college in 2005, Christina spent 2 years at the Justice House of Prayer in D.C praying at the Supreme Court daily for the ending of abortion. Then 3 years with the Atlanta chapter of the international grassroots pro-life movement Bound4Life. Christina seeks to love Jesus in word and deed. She has a burden for the black community and longs to see them free from the genocide of abortion.

Reprinted with permission from LiveActionNews