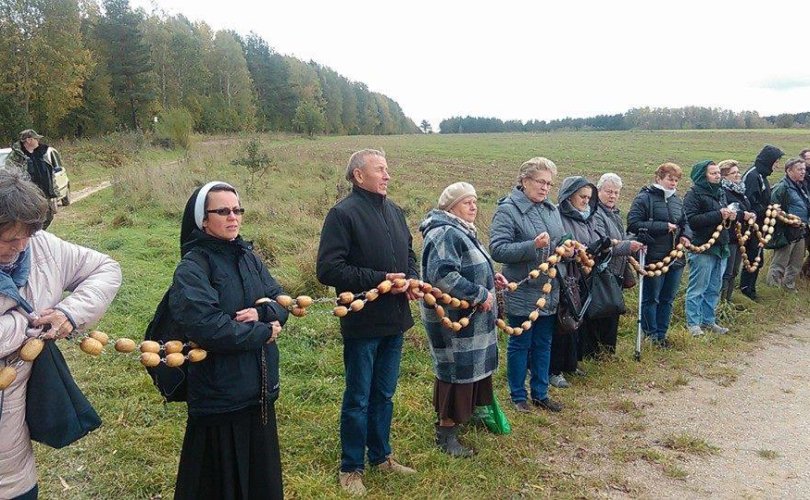 When one is convinced that his cause is just, he will fear nothing. –– Saint John Bosco

I can’t think of a better way to start the New Year than with a positive story – one that shows what great things are possible when a nation rejects the forces of atheistic secularism and turns back to God!

Perhaps you heard about the massive “Rosary at the Borders” event that took place in Poland on October 7, the feast of Our Lady of Victory and Our Lady of the Rosary. An estimated one million+ Polish people traveled to thousands of different locations on the Polish border to pray the Rosary. The goal was to encircle the entire country with prayer, begging Mary’s protection on the country and for peace in the world.

One of the two main organizers of the Rosary event, Maciej “Maciek” Bodasiński, explained: “We desire to pray for the conversion of Poland, Europe and the whole world to Christ, so that more souls will be saved from eternal damnation and find their path to God.” The event received official support from Polish Prime Minister Beata Maria Szydło, who on the same day tweeted out a photo of a rosary, writing, “I greet all the participants.”

However, this unprecedented show of public faith is just the tip of the iceberg, the most visible symbol of something much bigger going on in the former Communist country. The new Polish Prime Minister, Mateusz Morawiecki, gave an interview in December in which he expressed his intent to take steps to “re-Christianize the EU.” And indeed, story after story has emerged in recent months about how Poland is actively pushing back against the encroaching and increasingly intolerant forces of secularism, seeking to re-embrace its Catholic religious and cultural heritage.

Hope has two beautiful daughters: their names are anger and courage. Anger that things are the way they are. Courage to make them the way they ought to be.
–– Saint Augustine

While Poland is already one of the most pro-life countries in the EU (at least in terms of its laws), it sadly does still permit abortion in several cases, including when the baby is disabled, or in cases of rape. Unfortunately, a bill that would have completely banned abortion was rejected in 2016 by politicians, despite significant public support. However, almost immediately a new effort was launched to ban so-called “eugenic” abortions – i.e. abortions targeting disabled babies. A citizen’s petition supporting the new abortion ban has received a remarkable 830,000 signatures – more than eight times number necessary to automatically trigger a legislative debate on the issue!

This week, Poland’s bishops strongly backed the abortion ban, releasing an appropriately strongly-worded statement. “There can be no place for killing other people, especially disabled and sick children!” said the bishops. “This is not only a matter of worldview or religion but above all of science which unambiguously shows that human life begins at the moment of conception.”

Despite the country’s comparatively strong pro-life stance, however, it still suffers from an abysmally low birth rate at 1.32 births per woman – far below the replacement level. Recognizing the dangers that this catastrophically low birth rate poses for the future of the country, the government has begun to encourage couples to be open to life. As well, an effort is underfoot to restrict access to so-called “emergency contraception” – which can also act as an abortifacient.

The Polish legislature also recently passed a bill that would return the country to the traditional practice of keeping Sundays as a day of rest by requiring stores to close. The bill requires stores to begin closing two Sundays per month, moving to every Sunday by 2020. This might seem like a relatively small thing, but we shouldn’t underestimate the power of reclaiming Sundays as “the Lord’s Day.”

In the first place, the Scriptures clearly command the honoring of the Sabbath: “for in six days the Lord made heaven and earth, the sea, and all that is in them, and rested the seventh day; therefore the Lord blessed the sabbath day and hallowed it.” (Exodus 20:11) In the second place, reserving Sunday as a day of rest has enormous benefits for the spiritual, mental, and physical welfare of a nation, above all for families! Honoring the Sabbath not only carves out the time and space needed for prayer and spiritual refreshment, it also ensures that families have at least one day when they can be together, without the pressures of work or shopping. As a symbolic gesture of the value given to God and the family, reclaiming the Sabbath is enormously important!

Naturally, all the powerful, malevolent forces of radical secularism are trying to make it as hard as possible for Poland to return to its cultural and religious roots. A 2017 report from a Polish institute found evidence that the country’s pro-abortion movement has received “enormous funding” from foreign sources – above all from meddling, pro-abort extremist George Soros. The European Union as well has explicitly threatened Poland with sanctions if it passes the law protecting handicapped babies from abortion.

The mainstream media too, has been doing everything to distort the nature of many of the changes happening in Poland. The abortion ban is, of course, being treated as an attack on the “rights” of women, rather than a defense of the life of the vulnerable. Even more egregiously, the global media were at pains to paint the Rosary event as a hateful, xenophobic, bigoted, backward event, motivated by “Islamophobia.”

Be brave, do not be led by what others think and say!
–– Saint John Bosco

However, Maciej Bodasiński, the organizer of the event who I quoted above, strenuously denied that the event was targeted at any specific threat. Instead, he described it as “purely a spiritual event.” He explained:

This year, now in 2017, in the 100th anniversary of the revelations of the Mother of God in Fatima, we want to follow her call to pray the rosary for the rescue of the world. The Rosary to the Borders is not a crusade because we don’t want to fight with anyone. It is a giant commotion for, not against, something. We firmly follow her command, and we will pray at the borders of our country, going out in prayer and witness to the whole world, so that the Mercy of God is not confined to any border.

In the face of growing tension, threats of war, and terrorism, we want to pray for peace for the world. But peace is understood not just as lack of war but as the peace of God, the peace of the heart. Many people who have converted say that this is the greatest gift that they have received from the Creator — peace of heart. Whatever happens, you trust [in God], and you are calm. We pray for peace for people, among people, and among nations.

Never have truer words been spoken. It is fitting that this spiritual resurgence is happening in Poland – the home country of our beloved Saint John Paul II, the pope of the family. The Polish people suffered immensely under atheistic Communism; they saw first-hand what happens when God is systematically pushed out of a country. It is interesting that the country’s prime minister, the one who wants to “re-Christianize” Europe, risked and suffered much from a very young age in order to play an active role in the Solidarity movement that opposed Communism in Poland.

Communism is now effectively dead in Poland; but the country, like all other Western countries, is facing the new threat of radical secularism, which in addition to being dead-set on the destruction of religion, also loathes the traditional family and the unborn. Poland’s willingness to reject the pressures of the EU and wealthy secularists is a credit to the faith of the Polish people, and an example for the rest of us. Poland is showing that it is possible for a 21st century Western nation to resist the forces of secularism, and to bring faith back into the public square. May other Western countries begin to take note, and follow Poland’s example.

Editor's note: This piece first appeared on Human Life International and is republished here by permission.