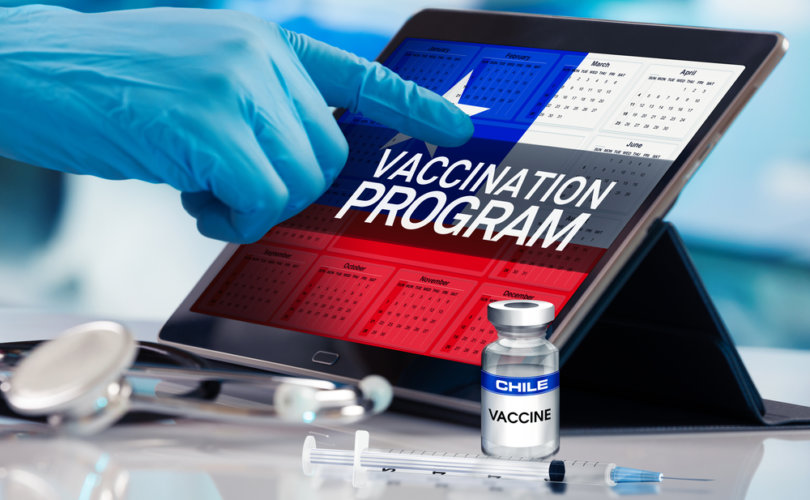 (LifeSiteNews) — Chile has become a lab for big pharma to get human guinea pigs to try their COVID vaccines.

The government pretends that vaccination is voluntary because the vaccines are experimental, but more and more restrictions of every kind are put into norms for those who do not want to get vaccinated for whatever reason.

Very few physicians have stood up and raised their voices against this tyrannical situation. Among the few to do so are Drs. Julio Bretas and Patricio Villaroel. In July, the two doctors and others formed an Association of Healthcare Professionals and Independent Researchers (APSIIN in Spanish) in order to try to stop the vaccine trials going on through a massive vaccination campaign for children age 6 and older.

The association started with a set of videos, an Instagram page and a website trying to inform the parents about the completely unnecessary risks to which their children are being exposed. Of course, YouTube banned their videos, but you can watch them in Bit Chute. The Chilean Senate Health Commission received the videos from the group but the association was unable to get Congress to stop the vaccination of children.

The association has alerted parents and schools that the Chilean equivalent to the FDA, the Institute for Public Health (ISP in Spanish), issued a negative review of the intended vaccination of children. And despite this, the government pushed hard for the vaccination campaign. To date, more than 2 million children have been inoculated with the Sinovac vaccine Coronavac.

The group has sent letters to the Ministry of Health and done everything in their power to protect the future of Chile and the bodies of innocent victims of human experimentation.

Since the vaccines were rolled out, some nurses warned the public when adverse effects were apparent. Catalina Caro Olave, member of APSIIN, spoke out when an 8-year-old healthy kid fell into a coma and was on the verge of dying due to the experimental substance inoculated into his body to prevent a sickness that poses no risk for him. She has been threatened and bullied due to her concern for her patients.

It is worth copying the translation of the letter sent to the Minister of Health in order to ask him to:

Why do they ask all of this? Because they are scientists or healthcare professionals, they’re well informed, and they actually care for the children:

First, children and adolescents, both epidemiologically and clinically, are the group with the lowest risk of serious illness from COVID 19, including from the new variants. Until July 12, 2021, mortality in this group was 0.002% and fatality 0.035% (more than 60% had comorbidities). In other words, children and adolescents have a survival rate of 99.97%, which differs greatly from that of people over 60 years of age, where fatality may reach as high as 10.29%. These observations indicate that mass experimental vaccination in children and adolescents is not justified based on emergency or high lethality.

On the other hand, current scientific evidence shows that the majority of children and adolescents are asymptomatic when they contract the virus (up to 80% of cases), and that, like adults, practically do not transmit the disease nor are they considered outbreak initiators at the community level. On the contrary, it has been observed that older adults who live with children are more likely to suffer from common colds, which implies that, due to the cross immunity demonstrated between coronaviruses, these older adults will be protected from serious infections by the SARS-COV-2 virus, without increasing the risk of hospitalizations in this age group in any way.

Second, safety data for vaccination against COVID-19 in children 3 years of age and older are still unavailable. The clinical trials of the vaccines included a very limited number of children, so it is possible that the short evaluation time involved was insufficient to detect adverse effects in the childhood population. The Pfizer-BioNTech mRNA vaccine is the only vaccine that has been granted emergency use authorization by the FDA for use in children 12 to 17 years of age. We highlight that this vaccine (which demonstrated systemic reactogenicity more frequently in younger patients and after the administration of the second dose) was licensed for children older than 12 years of age less than two months ago (in May 2021). This implies that the call for vaccination against COVID-19 for children starting at 3 years of age in Chile is being done without historical data, in the presence of unnecessary risks, and without the results from safety tests.

Data on the safety of the vaccines are still being collected and assessed. However, it has already been observed in the short term that about 86% of children inoculated with the mRNA vaccine suffered some type of adverse reaction and in the phase I / II study of the inactivated virus vaccine, a serious case of an adverse reaction was described. Among other adverse reactions, cardiac inflammation (acute myocarditis and myopericarditis) has been reported in healthy male adolescents between the ages of 14 to 19 years within 4 days after receiving the second dose of the COVID-19 vaccine, with findings including elevated serum troponin, abnormal ECG, abnormal cardiac magnetic resonance, Guillain Barré syndrome, and coagulopathies. Although it is true that these reports of adverse effects are very recent and a definite causal association between these cases and the administration of the vaccine has not yet been established, they are being observed at rates above those expected for this age group, occurring after the application of the mRNA vaccine against COVID-19, and subsequently reported in VAERS. These effects were not observed in previous clinical trials, nor was the harmful effect that the spike protein alone exerts, in the absence of virus, at the vascular and mitochondrial level, nor its possible biodistribution throughout the body. These recent scientific findings generate uncertainty about the potential unexpected effects in the medium and long term derived from the vaccine antigen’s permanence in the plasma and from possible immune cross-reactions within organs and tissues, which could trigger the appearance of autoimmunity.

It is also concerning that numerous women around the world complain of menstrual bleeding irregularities after receiving COVID-19 vaccines. Some experience heavy menstrual bleeding (menorrhagia), some bleed before the expected date (metrorrhagia) or bleed very frequently (polymenorrhea), while others complain of postmenopausal bleeding. Twice as many cases of menstrual irregularities have been reported in VAERS with AstraZeneca’s CoViD vaccine than with Pfizer, but the actual number of cases is surely much higher than that recorded in pharmacovigilance systems, as many women have not reported them; they may have been uncomfortable reporting, they may have thought that these symptoms were unrelated to the vaccine, or they may not have been encouraged by their physicians to make an official report to the adverse event reporting system. Because these vaccines are in the experimental phase, inoculation in children should be avoided, based on the precautionary principle, given the lack of knowledge of the possible impact on fertility in both girls and boys in their reproductive stage

Third, the efficacy of the vaccines against COVID-19 for children and adolescents reported by pharmaceutical companies indicates that the vaccines do not provide a important benefit to this group, given that the probability of survival for this group is 99.96%, and the absolute risk reduction provided by the vaccines is close to 1.4%, such that, by showing only decreases in relative risk, these reports overestimate the real effect of the vaccines by 100%.

Other risks, not yet evaluated, associated with the new vaccine platforms based on mRNA and vector technology that merit further investigation are the risk of generating prion disease due to the potential for RNA and DNA binding proteins to be converted into their pathological prion conformations, something that could be seen in the medium and long term, and the carcinogenicity, not yet evaluated, of vaccines, especially those that have been vectorized using human and chimpanzee adenoviruses. Studies have shown that viruses that infect one species can cause tumors if injected into another species. A human adenovirus type 12 injected into baby non-human primates caused eye cancer 12 to 36 months after injection. One to three years after injection, human adenovirus caused tumor masses that were indistinguishable from human retinoblastoma, a retinal tumor that affects children. Therefore, it cannot be ruled out that an adenovirus vaccine can cause cancer in humans, when injected at an early age. Human cell lines (for example human embryonic kidney HEK 293, or human fetus retina), have been modified with the help of adenoviruses to transform them into immortal cell lines.

Additionally, it is necessary to bear in mind that, as observed during the vaccine development process for the SARS-COV-1 virus (which is 80% similar to SARS-COV-2) in 2003, there is a possibility of generating antibody-dependent enhancement (ADE) of disease, and/or an allergic and anaphylactic Th2 immunopathology. During the SARS-COV-1 vaccine development, animal tests showed immunopathologies and serious inflammatory processes in 100% of inoculated animals, regardless of the type of vaccine used, when exposed to wild or circulating virus. It is worth asking: Is it necessary to expose children to this risk, especially when the risk is still being evaluated?

In other countries the same questions have been asked. Based on the available evidence, and until more information on safety and efficacy is available, Professor Anthony Harnden, Vice President of The Joint Committee on Vaccination and Immunization (JCVI) in the United Kingdom, announced on July 19, 2021, that they do not recommend vaccination in children under 12 years of age, meanwhile, in the 12 to 18-year-old group, they recommended vaccination only for those with severe comorbidities or who live with an immunosuppressed patient37. The main goal of the vaccination program has always been to prevent hospitalizations and deaths. Based on the fact that previously healthy children, if they do contract COVID-19, are likely to have an asymptomatic or very mild form of the disease, the potential benefits of vaccinating them are actually very small. The purported benefits of reducing transmission from children to the general population are also highly uncertain, especially since the vaccination rate is already very high in older people who are at increased risk of severe COVID-19 infection.

Each of the claims in this letter are supported by solid scientific literature. However, it seems that we are in a time in which pressure and wealth are more powerful than truth. Despite this, a courageous group of healthcare workers have been formed in Chile and they bear witness to the beauty of adhering to truth and to the love patients, especially children. They are authentic confessors of the truth and of true love. It is worth spreading the knowledge of their existence so that other groups in other countries are encouraged to do the same or to unite with them to help.