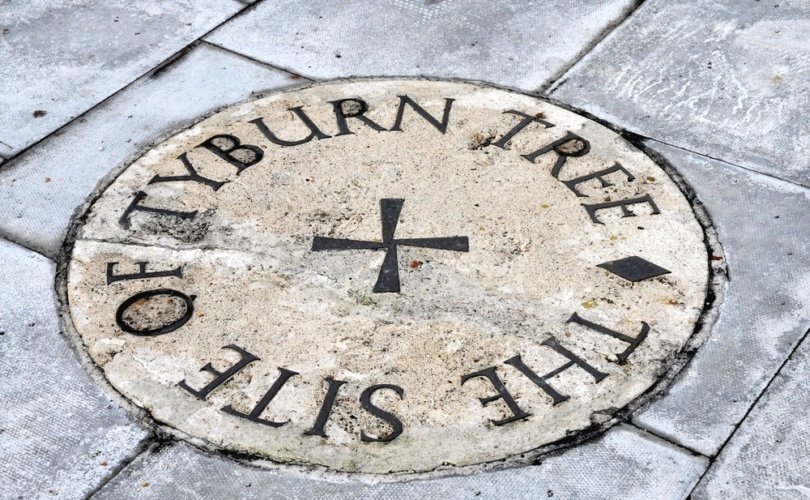 The site of the Tyburn Tree where over 100 Catholics were martyred during the reigns of King Henry VIII and Elizabeth I.SHUTTERSTOCK

ENGLAND (The Catholic Corner) — The world appears to be degenerating at an ever-increasing pace. Society seems to be stumbling ever more closely towards that totalitarianism which, previously, we thought only existed in history books or dystopian novels. Where do we, as Catholics, look for guidance? For a precedent? Where do we take our compass bearing from?

Quite frankly, we are spoilt for choice. We have innumerable options from the early Christians to the Cristeros, through to modern day Christians facing very real persecution in the Middle East. In these examples, although there be some nuance, the line between right and wrong, good and evil, spiritual fight or flight, was and is relatively clear. But there is one era of history very similar to our own. An era where confusion abounded; where things changed from one day to the next; where insidious government edicts pushed the boundaries of what a man might do and what a man should do. This period was the English Reformation.

The English Reformation came at the crest of the wave that was the Renaissance. It came in a pre-smartphone world when, it could be argued, the academy was somewhat less partial and partisan than today. At the dawn of the Reformation, it was the norm for the students of the University of Oxford to be well versed in multiple languages, ancient Greek, Latin, and the Classics in their early teens. Yet it all came crumbling down at breakneck speed.

We will not dwell on how it happened. Many fine literary works have been written on the subject. If you are reading this article, it is likely you know something of Henry VIII, Elizabeth, Regnans in Excelsis and Tyburn. Let us focus instead upon the parallels that might be drawn between that turbulent period and our own.

The parallels are striking: the state-mandated church closures, government lockdowns and quarantines today echo the state-mandated and compulsory Protestant liturgy in Elizabethan England. It is interesting to note that the same penalty for non-compliance was applied then, as now: heavy fines. Next, consider the equally applicable phenomenon of an agitated populace, incited by fear, political instability, and incessant changes to draconian rules – an environment in which the citizen is actively encouraged to be ever vigilant and denounce his neighbour to the authorities, either to advance his own interests or to save his own skin. A further parallel is that of a society on edge, tense, a breakdown of trust in the authorities, not least, in Church authorities.

Hilaire Belloc argues that just enough of the English aristocracy accepted the Reformation in exchange for material advantage (the monastic lands that some still hold to this day). If one compares this with certain political and celebrity figures today, the question should arise – what do they stand to gain for pushing this agenda? If it is true that all that is necessary for the triumph of evil, is that good men do nothing, then the Reformation hung on a knife edge. How much more is this applicable today?

In Reformation times, almost all of the English clerical hierarchy capitulated, with some notable exceptions such as St. John Fisher. Today is not dissimilar. While, undoubtedly, there are some lonely heroes, there is almost universal capitulation, as much by leading politicians as by captains of industry, to the Covid tyranny which is strangling western civilisation. And as for the Church hierarchy, the majority make their Reformation counterparts look like Carolingian warriors.

We are, many of us, familiar with the stories of the great saints and their exploits of that period; of Saint Margaret Clitheroe and the Shambles, of Campion’s Brag, of Fr. John Gerard’s thrilling escape from the Tower of London and of the Te Deums sang and masses celebrated in London’s Marshalsea prison – bursting with recusants. But let us also remember with pride that this turmoil of yesteryear, which we can easily identify with in our own age, triggered The Pilgrimage of Grace and The Western Rising, also known as the Prayer Book Rebellion, early on in the story.

Like the martyrs of the Vendée that followed them two and a half centuries later, these valiant attempts were overwhelmingly made up of common men, inspired by common sense and a common love of the Catholic Faith. In human terms, they were doomed to failure, but God is not mocked. The blood of the martyrs is the seed of the Church. England was almost immediately rewarded with an army of subsequent saints who kept the Faith alive, allowed it to survive and, later, flourish.

It remains to be seen how things will play out in our own times. What is clear is that the qualities that saw the ordinary man and woman through in Reformation England are the same qualities that will see us through now: an uncompromising spirituality, heroic virtue and common sense. We are not all called to be a Margaret Clitheroe, a Thomas More or an Edmund Campion, but we must ensure that we are at least amongst that class of extraordinary ordinary Catholics that swept out of the North in the Pilgrimage of Grace, or stormed out of Cornwall to their eternal reward in the Western Rising.

Published with permission from The Catholic Corner.
$
Donate Now