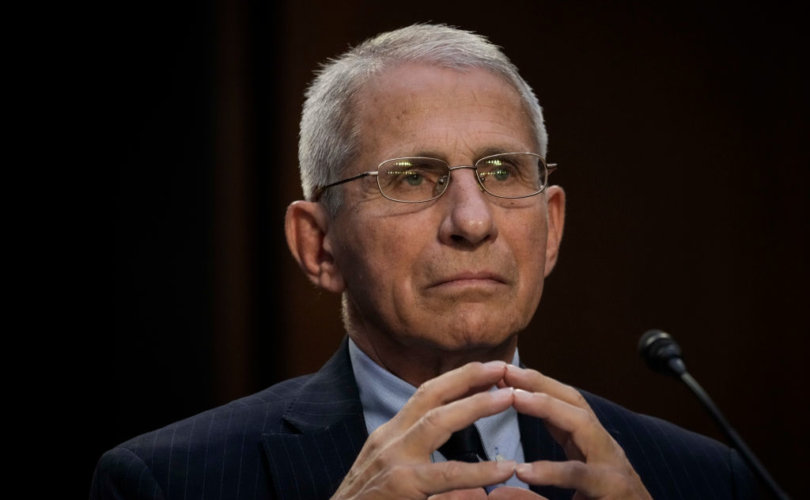 Dr. Anthony Fauci, testifies during a Senate Committee on Health, Education, Labor and Pensions hearing about the federal response to monkeypox, on Capitol Hill September 14, 2022, in Washington, D.C.Photo by Drew Angerer/Getty Images

(Pandemic Blunder) – It is not a question of revenge or vindictiveness. For all those who are genuinely well informed about the pandemic and COVID, it should be crystal clear that all the senior people in the key federal agencies (CDC, FDA, and NIH) who did everything wrong should be punished. They should lose their jobs and also be criminally prosecuted.

From the very beginning of the pandemic in early 2020 there were physicians and scientists who were doing and saying the correct things to prevent and cure COVID. Moreover, there was an unending stream of publications that used solid research to show that all the public health and government actions were ineffective and, in the case of COVID vaccines, actually very harmful.

But now fear seems to be settling in among the many inside and outside the government; they are making ludicrous cases for accepting their apologies and getting forgiveness.

But when you accept the ugly truth that many millions of people have suffered medical harm and death from the lockdowns, COVID mandates, school closings, ineffective hospital protocols, blockage of safe and effective generic medicines that were proven alternatives to vaccines, you should be angry and demand justice.

Be clear: no one in power, especially Dr. Anthony Fauci, ever really followed the science. All their actions have done incredible harm to public trust in science.

All their malfeasance had to do with power, control, and helping big drug companies make billions of dollars from vaccines and ineffective drugs like remdesivir.

Perhaps the best example of wrong-headed thinking is the article “Let’s Declare a Pandemic Amnesty.” The article highlights a key example of very bad thinking: “Given the amount of uncertainty, almost every position was taken on every topic. And on every topic, someone was eventually proved right, and someone else was proved wrong.”

Commenting on The Atlantic’s October 30 article, a wise physician noted:

The author is demanding to receive forgiveness for their conduct, but in their apology, is refusing to admit they did anything wrong… In reading this analysis, it is important to remember that many people make their decisions based on what their peers or the media tells them to do (which is likely the audience this article was written for) rather than being self-directed and using critical thinking to discern which decision makes the most sense to them. As a result, we almost certainly interpreted this article dramatically differently from its intended audience which is receptive to this style of persuasion.

Thinking about this article more, I believe the fundamental logical error in this article is that leaders should be absolved of their responsibility for making incorrect decisions if there was a degree of uncertainty with the information at hand. This is not the standard we have held our leaders to, as their job is always to make the best decision they can with the information that is available, and in most eras, if the decision was correct they were praised for their leadership, whereas if the decision was incorrect they were blamed for their mistakes. The ‘but I couldn’t have known!’ excuse has never been deemed an acceptable way for leaders to justify their mistakes…

I think the degree to which the vaccines were a scam is going to red-pill a lot of people who had previously been subservient to media propaganda, and if we patiently wait, much more genuine apologies will be forthcoming.

The point is that there were always terrific medical experts, such as Dr. Peter McCullough, who from the beginning knew what was correct and used every means to inform the public. But the mainstream media was and remains a co-conspirator in supporting official incorrect and harmful policies and strategies. And no doubt now they will make an effort to protect all the guilty government and public health officials before House Republicans get the power to reveal all the criminal behaviors that have caused the death of over one million Americans and medical harm to over 30 million.

On Tuesday, as an example of media disinformation, The Washington Post said an NIH official “pointed out that both ivermectin and hydroxychloroquine target human proteins but have yet to show any value in fighting COVID-19.” That is contrary to mountains of medical studies and clinical practice that have found both to be effective for COVID.

I am not impressed by the mea culpa of the head of the CDC: “For 75 years,” Walensky told a press gathering on August 15, “CDC and public health have been preparing for COVID-19, and in our big moment, our performance did not reliably meet expectations.”

Sorry, not good enough. She and Fauci and many others deserve punishment for pandemic mismanagement and COVID malpractice. For example, a New York Post article noted that “Rochelle Walensky at the Centers for Disease Control and Prevention, allowed Weingarten [school teachers union official] to craft absurd, unscientific policies that kept kids out of school.”

Consider that, just four days before Walensky’s statement, the CDC undid much of the guidance it had spent more than two years inventing, justifying, and enforcing. On August 11, the CDC substantially relaxed its COVID guidance by dropping social distancing, suggesting that masking is needed only around sick people or those with an active case, and dropping the need to quarantine for unvaccinated individuals, suggesting instead a five-day period of self-imposed isolation. Routine testing by employers and schools is no longer part of CDC guidance. The CDC largely removed schools, businesses, and institutions from an enforcement role on social distancing, masking, and quarantining and reduced its suggested booster frequency to once a year.

Sorry. Not enough. The CDC has been both a disgrace and failure. All of its senior officials should be fired.

Forget apologies and forgiveness. If we are ever to get better pandemic management in the future, then all the incompetent, corrupt and guilty officials and doctors must be given justice and punishment. Reject their apologies. It is just a tactic to avoid genuine justice.

Dr. Joel S. Hirschhorn, author of Pandemic Blunder and many articles and podcasts on the pandemic, worked on health issues for decades, and his Pandemic Blunder Newsletter is on Substack. As a full professor at the University of Wisconsin, Madison, he directed a medical research program between the colleges of engineering and medicine. As a senior official at the Congressional Office of Technology Assessment and the National Governors Association, he directed major studies on health-related subjects; he testified at over 50 US Senate and House hearings and authored hundreds of articles and op-ed articles in major newspapers. He has served as an executive volunteer at a major hospital for more than 10 years. He has been a member of the Association of American Physicians and Surgeons, and America’s Frontline Doctors.

Reprinted with permission from Pandemic Blunder.