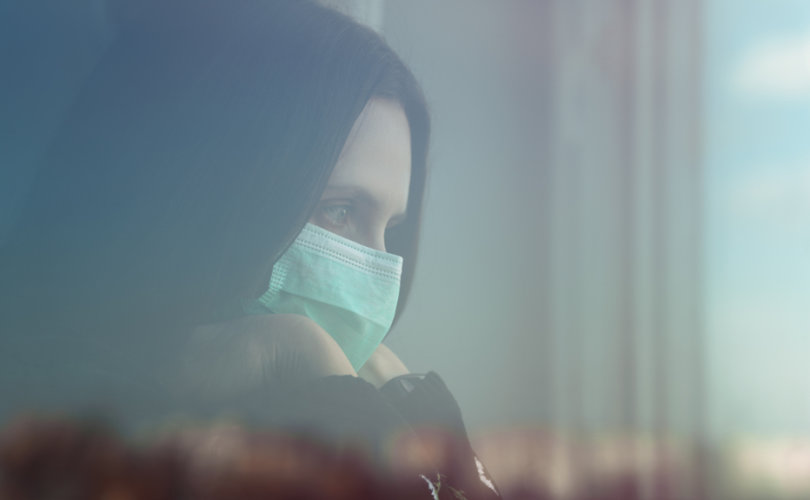 (LifeSiteNews) — Why is there an epidemic of mental illness in the West? Record levels of drug abuse and widespread dependency on antidepressants and anxiety medication have become the norm. It seems that every child in school is diagnosed with some condition or other. Addiction is everywhere – to our phones, to the pornography they deliver, and even to food. Eating has become disorderly. Anorexia and obesity are commonplace. Something is seriously wrong when one of the strongest common denominators is sickness.

It seems to be overlooked that most of the population of the West was forcibly detained in their own homes over two years of hysterical fearmongering. The damage done lurks like an iceberg in the water. Mainly submerged, with only the tip suggesting its presence, it is a taboo of sorts to mention its hidden magnitude. Why is this the case?

Widespread mental anguish was not caused by lockdowns, but it was certainly multiplied. The severity and prevalence of individual misery has been intensified by a process so simple to understand when simply named: isolation.

There is a reason that solitary confinement is viewed as torture and that is because it destroys people. To be deprived of the balm of company is to wither. Instead of schoolrooms, workplaces, and walks in the park, we had screens to stare at. It is hard to remain happy and sane when staring at a screen all day.

Screen-based interaction is worse than nothing. It replaces real people with moving pictures, their voices modulated and often stuttering, as the wifi signal fails and you are reminded that you are participating in a cheap and shoddy simulation of life which has become your life.

This fact is depressing in itself. We were compelled to send our kids to ‘zoom school’, which meant to sit them in front of a screen and learn their lessons. They learned to be less human. They learned that people who were there were also not really there. They learned that about themselves, which is why so many of them are so poorly adjusted. This was done in the service of public health.

It is hard to conclude that this was meant to be good for anyone. What kind of person would not see that this would be disastrous? You would have to be an “expert” to be so blind to the obvious.

The destruction of human social bonds which came with lockdown destroyed many of the community groups and sports and social clubs that made life so rewarding. It offered something in its place that was presented as attractive, convenient, and a thoroughly modern solution. The remote life, the backlit solitude of substitute living where we watched Netflix and imagined other people doing things – this was the product we were sold. It was poison.

READ: Pfizer to raise COVID vaccine prices by as much as 400% as demand for booster shots collapses

— Article continues below Petition —
PETITION: Demand the Conservative Party apologize for not resisting Trudeau's COVID regime
Show Petition Text
4417 have signed the petition.
Let's get to 5000!
Thank you for signing this petition!
Add your signature:
Show Petition Text

It is an old trick. Much of what we are sold as food is poison. The same can be said for the messages we receive in the media. At base, consumer culture is an attempt to wean people off the rewards of real-life relationships and to offer them some cheaply available, convenient substitute. Fake reality instead of life, and a series of consolation prizes to buy while you watch it.

The consumer culture of the West is a vast mental illness factory. It seeks to isolate the consumer in their desires. It cannot sell you second prizes if you still possess the first. People with strong social bonds, with happy relationships in their lives, people who have God and their extended family – the nation, people who cherish their children instead of aborting them: these people rely far less on buying things to feel less bad because they do not feel bad in the first place.

There is no mystery as to what makes people contented or causes them to despair. Breaking all their ties to the world outside their mind makes them unquiet, anxious, morbidly self-obsessed. This means they will buy drugs, pay therapists to replace their absent family and friends, and seek to reinvent themselves with new clothes and experiences to escape the prison of the self.

People who have not lost at life do not require these consolation prizes. And the prizes are not simply products, but also labels. Having a label for your sad behaviour can often be empowering. It can be an excuse to misbehave in school, or to have no self-control as an adult. Mental illness is being marketed in this way as a good move. It is an imaginary friend with benefits.

This is the nature of our consumer culture. It has developed from a means of delivering cheap food and clothes and toys to fostering dependence on itself – at the exclusion of everything else.  The common thread that binds the epidemic of mental illness, lockdowns, and the insatiable desires kindled in the consumer is dependence. This system profits most when we are all broken.

What can be done? How to escape when the message is everywhere? It is important to remember that you must be in the world, but you may decide whether or not to be of it. I am in the soup, of course, but I refuse to be a mere carrot.

This is a system which sells sickness as medicine. The more you take it, the more you need. If your spending habits resemble a repeat prescription, then break them – before they break you. Real life, with real people and real connections to reality, will nourish you through failure and compromise, spontaneous laughter, and the company of fellow human foibles. The worst aspect of social isolation is to make a prison of your mind and to lock you in it. We become our own worst enemies in these cages without bars, and the result is to make us fear to be alone with ourselves. A fearsome horror show lurks behind the eyelids, dominating that once gentle darkness which used to bring sleep.

Accept no substitutes for life. Beware of accepting labels whose purpose is to make you feel permanently helpless. Yes, our culture wishes to make you dependent, but addiction like this is a habit – something to which we are used to saying yes, without knowing. Say no. Help others to do so. This is how we win.