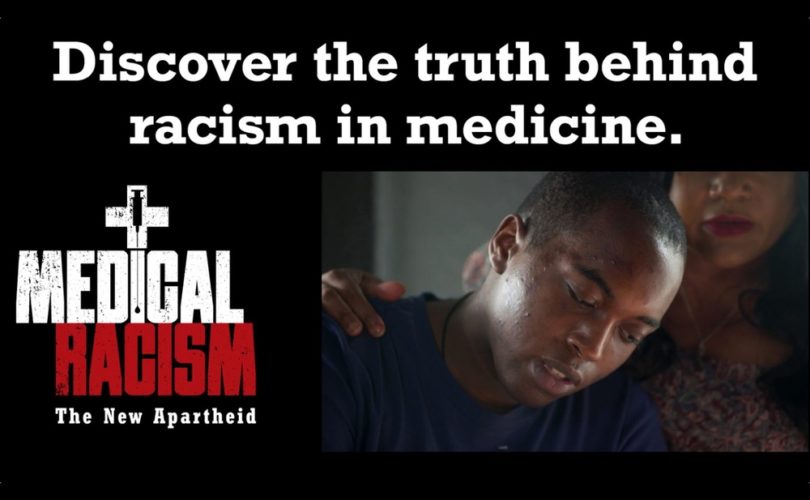 March 16, 2021 (Children’s Health Defense) — In recent months, numerous constituencies — physician groups, government departments and the Gates Foundation, to name a few — have called for underserved communities of color to be placed at the front of the line for COVID-19 vaccines, characterizing this gesture as a practical and symbolic way to fight racial and economic injustice.

However, ethnic minorities — familiar with U.S. government medical ventures that have weakened and sabotaged members of their communities for decades — do not seem to be buying into the labored Orwellian narrative that casts experimental mRNA vaccines as a silver-bullet racial justice remedy.

Instead, regional and national surveys highlight widespread rejection of COVID-19 vaccines among African Americans, in particular, who find the idea of serving as medical guinea pigs offensive.

The new film, “Medical Racism: The New Apartheid” (a project of CHD Films) illustrates the ample historical basis for this skepticism.

And, when it comes to vaccine experimentation specifically, a significant body of research “raises the question as to whether African Americans should be prioritized for a poorly tested vaccine when the available science shows that this demographic may be at a higher risk for adverse reactions to vaccines.”

The bottom-line implication of studies delineating racial/ethnic variability in immune responses to influenza, rubella and hepatitis B vaccines is that “Immune reactions that are too strong can result in more adverse events and inflammatory responses.”

Off to a disastrous start

It so happens that African Americans and other ethnic minorities were disproportionately represented among the frontline healthcare workers who began receiving vaccines during the Phase 1A launch of the experimental Pfizer-BioNTech vaccine.

According to a 2020 report, 39% of healthcare workers are non-white and 16% are foreign-born. Other recent economic analyses indicate that an even higher proportion of “health-support workers” such as nursing assistants and home health aides — over half (54%) — are non-white. People of color are also overrepresented among many of the other categories of “essential” workers targeted to receive COVID-19 vaccines.

The severe allergic reactions observed in response to the early Pfizer injections in both the United Kingdom and the U.S. were immediate evidence of an over-the-top immune response that should have raised a red flag. However, even with further reports of anaphylaxis following both the Pfizer and Moderna vaccines, the CDC has maintained that the mRNA injections are “a good value proposition.”

Allergic reactions are far from the whole story. Reports filed with the Vaccine Adverse Event Reporting System (VAERS) between mid-December and March describe 31,079 injuries, including 1,524 deaths, following both the Pfizer and Moderna vaccines.

Although this translates into a worrisome 1-in-43 injury rate (2.3% of 215,362 vaccine recipients tracked through v-safe), the CDC Work Group did not indicate any plans for follow-up. Moreover, while details about the injured workers’ ethnic and other demographic characteristics would certainly be pertinent, the top official at the CDC’s National Center for Immunization and Respiratory Diseases who released the data furnished no such information.

When pressed, medical, public health and government officials eventually admit to America’s “terrible history” of medical experimentation on ethnic minorities. The long list of egregious experiments includes the government’s infamous four-decade-long Tuskegee experiment (which might have carried on even longer had it not been for a whistleblower) and measles vaccine experiments conducted on poor minority children in Los Angeles in the late 1980s, which resulted in the death of a toddler (pronounced “unrelated to the vaccine”).

Despite their grudging admissions, officials have come up with all sorts of creative ways to downplay the arrogance guiding their experimental debacles. Discussing the Los Angeles experiment, for example, senior CDC personnel’s feeble mea culpas included stating “Our doctors just didn’t think of it as being ‘experimental,’” and “things sometimes fall through the cracks.”

The LA investigators also defended their measles study’s focus on African American and Latino children from poor neighborhoods by saying, “you have to study the area where the disease is occurring.”

Fast-forward to 2020, when even the executive director of public health’s trade group, the American Public Health Association, acknowledged that “early access to a COVID-19 vaccine could make racial and ethnic minorities feel like they’re the subjects of an experiment.”

A health disparities researcher told MarketWatch, “I’m very cringey at this suggestion regarding giving the vaccine that hasn’t been distributed at the population level to brown and Black folks. As well-intentioned as it might be … it almost feels like it’s being tried out on them.”

After all, Emergency Use Authorization — a relatively recent U.S. Food and Drug Administration (FDA) tool used for the first time in 2009 — means, by definition, that FDA is allowing use of a medical product or biologic “without all the evidence that would fully establish its effectiveness and safety.”

Although relatively few members of the public are aware of the important distinction between emergency use and formal licensure, the Pfizer, Moderna and Johnson & Johnson COVID-19 vaccines are, nonetheless, still openly experimental.

To circumnavigate objections from ethnic minorities about the push for their involvement in a mass COVID-19 vaccine experiment, the discourse about medical racism has had to undergo some improbable contortions.

Coronavirus-era communication and persuasion strategies include deploying virtue-signaling talking points about using the vaccine to “reckon with past wrongs,” enlisting ethnic minority opinion leaders as a “bridge” and patiently explaining that race is merely a “proxy” for socioeconomic factors.

Illustrating this roundabout logic, a medical researcher at the University of Chicago asserted in September that the very first groups to get COVID-19 vaccines should be “marginalized communities” hardest hit by the coronavirus as well as those “at increased risk for exposing others.”

While striving to distance herself from an overt focus on race, she nevertheless advocated for three groups to be first in line: prison populations (39% black and 30% Hispanic), “essential workers without the ability to work from home” (50% or more people of color) and “racial and ethnic minorities living in densely populated areas that make it difficult to practice social distancing.”

Fortunately, comments posted to the Chicago professor’s article suggest that more and more people are growing wise to the “disgraceful” and insincere racial injustice mantra on display in op-eds about prioritizing underserved communities for COVID-19 vaccines.

As the parents, professionals and leaders featured in “Medical Racism: The New Apartheid” take pains to spell out, medical experimentation — and liability-free coercion to vaccinate — are unacceptable under any and all circumstances.

Now more than ever, all groups must join forces in defending rights to bodily integrity and the right to refuse unwanted medical interventions.