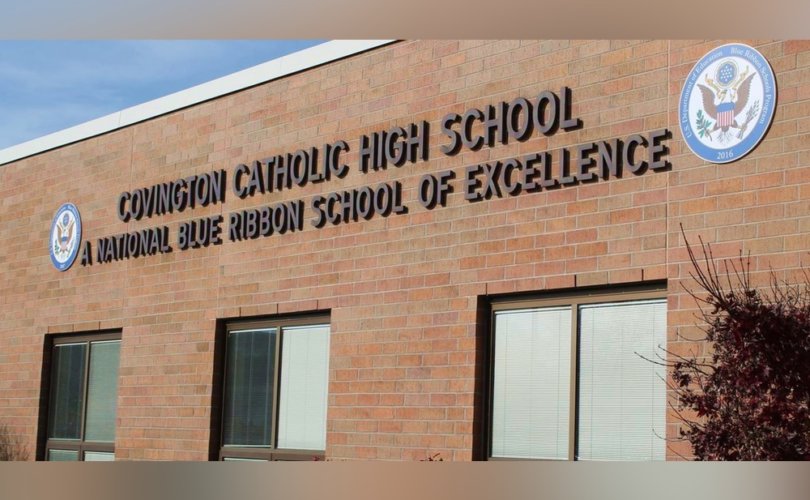 January 23, 2019 (Lepanto Institute) – The hits keep coming for the boys of Covington Catholic high school.  Over the weekend, the students suffered brutal threats and malicious smears from the media and celebrities because an attention-seeking member of the American Indian Movement told several lies about what had happened.

In short, Nathan Phillips, a member of the Omaha tribe who claimed to be a “Vietnam times” veteran, cried on camera while claiming that he was surrounded by boys from the high school; claimed that they chanted “build that wall”; claimed that he was afraid of them because they wouldn’t let him retreat; claimed that he was singing a prayer for peace; and claimed that he maneuvered himself between the students and members of the Black Hebrew Israelis because the students were becoming aggressive with them.  All of this is false and has been proved false by the full range of video that has become available to the public.  See here for proof of Phillips’ lies.

Following the shameful attacks on the character of the boys of Covington Catholic, at least three bishops rushed to judge them as well.  Their own bishop, Bishop Robert Foys, immediately condemned the boys, apologized to Phillips, and stated that an investigation had been initiated, which could lead to expulsions.  After that, the Archdiocese of Baltimore issued its own condemnation, as did Archbishop Kurtz.  See here for a fuller explanation of how the bishops’ actions have fueled the vitriolic frenzy against the boys.

In an email sent to parents at 7:10 pm last night, Covington Catholic principle Bob Rowe discussed security concerns and procedures.  Listed among the new procedures was a restriction of entrance to the school, admitting only students, faculty and staff.  Parents could be admitted only if they had a scheduled appointment.

In the interest of maintaining the integrity of the school’s security process, we’ve reduced the email to only the portions relevant to this story:

Dear Parents,
Over the course of the last four days, we have spent a considerable amount of time consulting with local officials from surrounding cities and counties, homeland security, school administrators and other safety officials regarding the situation that took place in Washington DC and the subsequent events that have occurred. Our intent with all of these meetings was to ensure the safety and well-being of all members of our learning community upon return to school. With this in mind, we have taken the necessary steps to return to school tomorrow Wednesday, January 23. These include:

We plan to limit the entrance and exit to the school building and ask that only students, faculty, and staff enter unless otherwise scheduled

What the email did not indicate was that Bishop Foys would be addressing the students today, upsetting parents and students alike.

One parent, who said that she was upset and frustrated about the matter, told the Lepanto Institute:

“My boys are at school today (Covington Catholic) and they were addressed [by] our bishop, Roger Foys, sans parents. In fact, there has been no info given to parents about how the kids were to be treated or what would be said to them. We didn’t even know the bishop would be addressing them. The school isn’t answering phones, the voicemail is full, the website is down and we were given a statement that basically said we weren’t allowed at school today.”

Other sources, speaking on condition of anonymity for fear of reprisals, told us that Bishop Foys was completely unapologetic about his public condemnation.  Addressing his condemnation, Bp. Foys told students that he couldn’t please everyone.  He also mentioned that he has hired an investigative team to look into the incident and would not be making a statement until the investigation as completed.

Lepanto Institute is told that Bp. Foys told the boys that he is “100% on the boys’ side and always was,” while claiming that “if [their] actions had been bad, it would be a good statement.”

The Lepanto Institute launched a petition yesterday asking Bp. Foys, Abp. Lori, and Abp. Kurtz to retract their condemnations of the Covington Catholic high school boys and issue an immediate apology for so rashly judging them.  So far, Abp. Lori has retracted his condemnation and apologized.  After recounting the incident involving Nathan Phillips and the Covington Catholic boys, Abp. Lori’s apology states, in part:

“It has become apparent, however, that initial reports of that incident were at best incomplete. Those incomplete reports led many, including the Archdiocese of Baltimore, to speak out too hastily. We apologize for doing so.”

It is our hope that Bp. Foys and Abp. Kurtz will soon retract their hasty condemnations and issue apologies as well.

Editor's note: This article first appeared at www.lepantoinstitute.org. It is republished here by permission of the author.