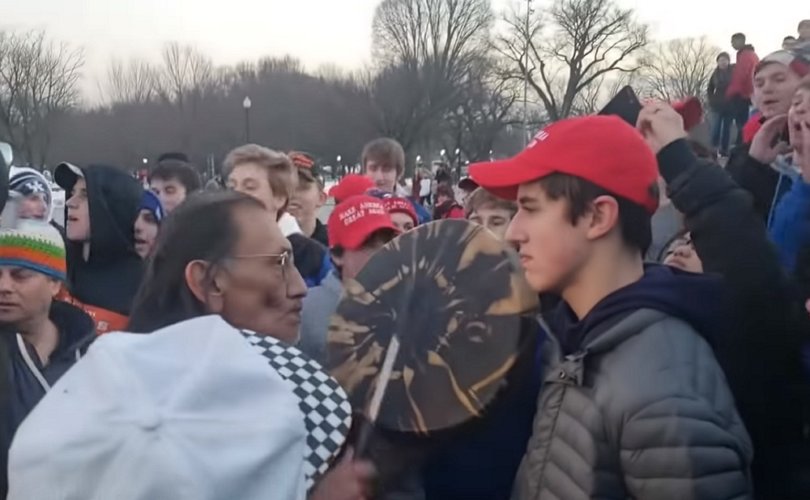 January 25, 2019 (Family Research Council) – Under normal circumstances, the kids at Covington Catholic would be cheering the extra day off. But yesterday's decision to cancel classes was not a moment anyone celebrated. It was a reminder that no one in the tight-knit community is safe. Least of all the children.

Four days after Covington students clashed with a man by the Lincoln Memorial, police cars are still staked out across the high school. The parking lot is closed, and officers have fanned out everywhere just in case one of the hundreds of threats pouring into the school materializes. The Left's rush to judgment about a group of teenagers in MAGA hats at the March for Life means that basketball games have been postponed. Clothes with Covington colors are too dangerous to wear. And life for some of these teenagers may never be the same.

It was the kind of story liberal reporters dream about – a group of pro-life Catholic Trump supporters caught on tape abusing an older man with a different ethnicity. They seized on the video of a “smirking” Nick Sandmann like a pack of wolves, savoring the opportunity to prove that every MAGA hat-wearing American is an evil homophobic racist misogynistic sociopath (as one extremist so eloquently put it). The image of Nick's face went viral, unleashing a raw and feral torrent of backlash. Nick and his friends were savaged across every media platform. “I want NAMES,” Kathy Griffin demanded. “Shame them. If you think these f—–s wouldn't dox you in a heartbeat, think again.” Best-selling author Reza Aslan tweeted that the Nick had a “punchable face.” Others called for him to be burned alive – a high school junior with a spotless record. “I have never heard such cruel things wished upon another human being,” Covington Senior Grant Hillman said soberly.

There's just one problem. The accusations weren't true. Longer videos showed that Covington Catholic kids weren't the aggressors – they were the victims, first of a group of Black Hebrew Israelites, then by the media's phony martyr, Nathan Phillips. And while hate may be in the Left's vocabulary, sorry isn't. When the full version of the tape was released, the New York Times didn't apologize. They said, “more videos later emerged complicating the story.” To the other side, I suppose that's what the truth has always been – a complication.

Shame first, confirm later. But in the rush to paint a group of pro-life teenagers as a gang of Trump-loving thugs, the irony is this: liberals doxxed themselves. It's no longer a mystery where the real prejudice lives. And unlike the crucifixion of Brett Kavanaugh – and you can draw plenty of parallels – this is not an “oops, my bad” moment for the Left. These are children with futures and families and friends. In a world like ours, where one tweet, one hate map, one cellphone video can end up in the wrong hands, there are real consequences here. We at FRC have seen them.

As the Wall Street Journal points out, “Most of those who so eagerly maligned these boys will face no lasting consequences, while the boys themselves will always have to wonder, when they are turned down for a job or a school, whether someone had Googled their name and found only half this story. This is an ugly moment in America, all right, but there are few things uglier than a righteous leftist mob.”

Some of the boys' critics were brave enough to retract their statements. CNN's S.E. Cupp did an immediate mea culpa. “Hey guys. Seeing all the additional videos now, and I 100% regret reacting too quickly to the Covington story. I wish I'd had the fuller picture before weighing in, and I'm truly sorry.” Others, like the Atlantic's Julie Zimmerman, used her snap judgment as a cautionary tale. “Why are we all so primed for outrage, and what if the thousands of words and countless hours spent on this had been directed toward something consequential? If the Covington Catholic incident was a test, it's one I failed.”

The rest of the media continue to see what they want in the footage, which is really not so different from how they treat anything that conflicts with their agenda. Biology, moral law, science, the Constitution – it's all irrelevant if it doesn't fit their narrative. To them, these kids will never be innocent because of who they are and what they believe. Real bigotry doesn't stop to acknowledge truth, which – along with the Left's deep desire to destroy conservatives – is what keeps the wheels of fake news churning.

Joy Behar didn't mind admitting as much on yesterday's “View.” When Whoopi Goldberg asked why “we keep making the same mistake,” Joy was honest. “We're desperate to get Trump out of office,” she said. What she and her extremist friends don't seem to realize is that vitriol like this only makes that more unlikely. When a group of high schoolers behave more grown up than the mobs who come after them, the Left is losing its grip on a lot more than reality. It's losing its argument for America.