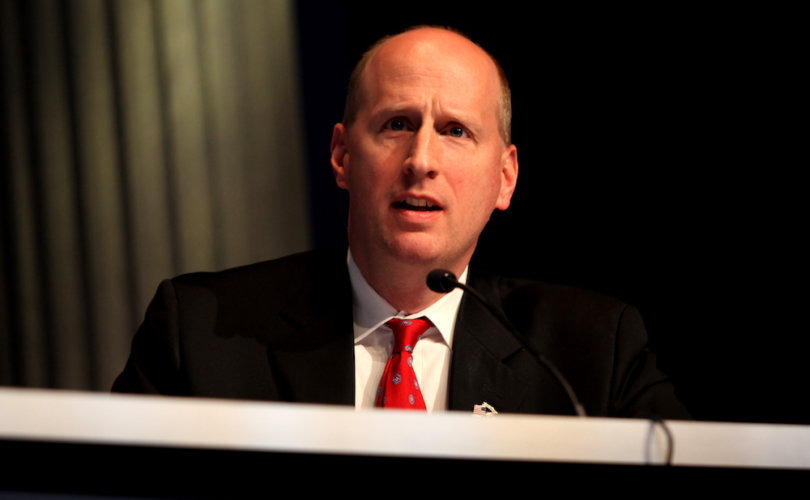 April 26, 2019 (LifeSiteNews) — From a conservative Christian perspective, Franklin Graham’s rebuke of Democrat presidential contender Pete Buttigieg should have been unobjectionable. But in some corners of the Religious Right these days, it seems the real cardinal sin is to defend the faith while owning a MAGA hat.

As my colleague Doug Mainwaring covered this week, Buttigieg has been asserting that his same-sex “marriage” not only isn’t sinful, but has “moved me closer to God.” As someone who knows a thing or two about what the Bible actually says, Graham took to Twitter to respond:

Mayor Buttigieg says he’s a gay Christian. As a Christian I believe the Bible which defines homosexuality as sin, something to be repentant of, not something to be flaunted, praised or politicized. The Bible says marriage is between a man & a woman—not two men, not two women. 2/3

Rather than echoing Graham’s point and helping push back against a national politician’s distortion of Christianity, National Review’s David French responded with a column attacking Graham as an example of “lost evangelical witness” — because Graham is a fan of Donald Trump. He accuses Graham of “abandon[ing] Christian principles when it’s politically expedient” and on that score catches him in what appears to be one count of inconsistency.

French quotes Graham as forcefully denouncing Bill Clinton’s infidelity in 1998 on the grounds that if a president “will lie to or mislead his wife and daughter … what will prevent him from doing the same to the American public”…then concluding in 2018 that Republicans were wrong to have gone after Clinton because both his and Trump’s affairs were private matters:

Here’s the full context of the Franklin Graham quote about Daniels: pic.twitter.com/uE9ROxn5ko

It’s fair to chide Graham for compromising his 1998 stand for the apparent sake of partisanship, but it’s also worth mentioning that that’s not all he’s said on the subject.

“Now, people say, ‘Well, Frank, but how can you defend him, when he’s lived such a sordid life?’ I never said he was the best example of the Christian faith. He defends the faith. And I appreciate that very much,” Graham told Axios last November. “Trump has admitted his faults and has apologized to his wife and his daughter for things he has done and said. And he has to stand before God for those things.”

Assuming it’s true that Trump has privately apologized to his family, isn’t this precisely how Christians are supposed to view sin? That sinners owe repentance to God and to those they’ve hurt but needn’t be perpetually shunned or endlessly browebeaten for their pasts?

Further, how is it “blatant hypocrisy” for Graham to embrace a politician with a sinful past while criticizing a politician who champions his sin in the present? For all of his faults, I’m pretty sure Donald Trump never suggested that Stormy Daniels brought him closer to God.

This is just the latest in French’s ongoing narrative that Christian support for Trump has “seared the consciences of the culture and the church, and granted their secular opponents all the ammunition necessary to question our sincerity as believers” — a theme his wife Nancy hammered at the Washington Post Thursday, arguing that religious conservatives should be “ashamed that LDS Romney stands up for Christian values more than Trump and his sycophants combined.”

Mrs. French suggests that evangelicals ignored Mitt Romney’s sterling character out of anti-Mormon bigotry, only to happily ignore Trump’s not-so-sterling character. As someone who supported Romney as the least bad option in 2008 (partly due to the Frenches’ “Evangelicals for Mitt” site, ironically), I remember things differently.

While there was some talk of Romney’s faith, some of which was pretty ugly, it hardly entered into the minds of most Romney skeptics (Mike Huckabee had to apologize after being widely condemned for the remarks Nancy cites). Instead, most were understandably suspicious of a former abortion supporter who seemed to conveniently see the light on multiple issues just in time to run for president.

Romney and Trump both won their respective presidential nominations, and the general-election support of conservative Christians, for exactly the same reasons: because the primary votes were fractured among crowded fields, after which we took a chance on flawed men promising to defend life and liberty against alternatives we knew would oppose life and liberty.

Is Donald Trump a moral exemplar? Of course not. Have some conservative and Christian figures become partisan cheerleaders for him? Sure — but if you think Trump is the first Republican standard-bearer for whom that’s been the case, you haven’t been paying attention.

That’s part of why Romney’s periodic attacks on Trump rightfully disgust conservatives. It’s not that Trump shouldn’t be criticized when the occasion calls for it, but that Romney-style attacks lack perspective and are gratuitous, tailored to appeal to liberal prejudices, and largely selective (following the Mueller report, Romney spent tremendous outrage on Trump but had none to spare for other bad actors involved in the fiasco). In that sense, he epitomizes the type of Republican that drove voters away from the GOP and into Trump’s arms in the first place.

Since 2016, the Frenches have made a name for themselves for hostile (and factually indifferent) commentary about Trump and other conservatives they deem excessively favorable to him, which seems less about advocating a consistent Christian political ethic than about pursuing a vendetta, driven partly by the abuse they received by pro-Trump trolls during the election. I feel for any recipient of fringe hate and anonymous threats, but at some point resentment ought to give way to the values and causes that are supposed to unite us.

A politician’s sordid past, low character, and worst fans’ behavior are worth acknowledging and repudiating, but they pale in moral urgency compared to the slaughter of preborn children or the war on religious liberty. And Christians aren’t “costing the church” or “overlooking their values” when they prioritize their time and energy accordingly.