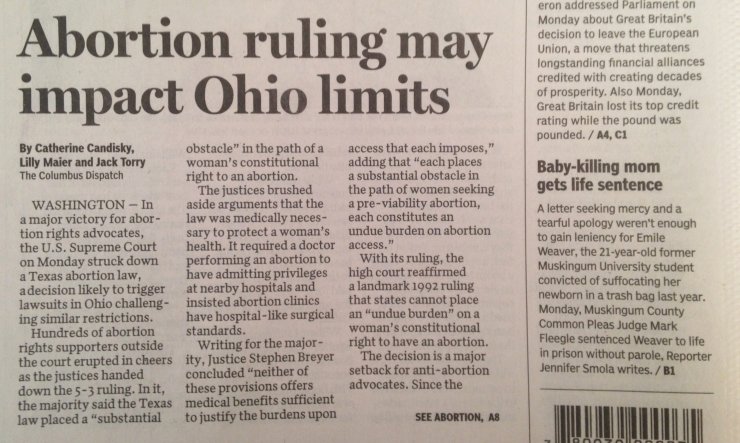 June 28, 2016 (Pregnancy Help News) — On Monday morning, His Royal Highness Justice Anthony Kennedy ruled that the state of Texas had no right to “unduly burden” its own abortion businesses by setting and maintaining commonsense health and safety regulations at the facilities.

That story we already know. But, Monday also brought along news of another court case you may not be familiar with quite yet.

Though it’s not likely to make national headlines, the story was featured on the front page of Tuesday morning’s Columbus Dispatch, directly across from a headline hailing the Supreme Court’s ruling in Whole Women’s Health v. Hellerstedt —complete with an above-fold photo of abortion enthusiasts celebrating the decision.

The second headline, “Baby-killing mom gets life sentence,” tells the story of Emilie Weaver, a former college student at Muskingum University in Central Ohio, who was sentenced Monday to life without the possibility of parole.

In April of 2015, Weaver, 21, gave birth to Addison Grace Weaver. Minutes later, she suffocated her newborn daughter to death with a trash bag.

Despite a tearful apology asking for the court’s leniency in a letter to the court, as well as an in-person petition, Weaver failed to convince Muskingum County Common Pleas Judge Mark Fleegle that her remorse warranted a reduced sentence.

Pointing back to a string of text messages between Weaver and a friend—which included the message, “No more baby… taken care of”—Judge Fleegle highlighted the fact that, even in her four-paragraph letter asking for leniency, Weaver had used the personal pronouns “I” and “my” 20 times.

While her sentencing is no doubt sorrow upon sorrow, it would seem Weaver understands the “pro-choice” argument all too well.

At no point in the 44-page opinions delivered by the Supreme Court in Whole Woman’s Health does the word “baby” appear. Looking a bit deeper, the word “child” only appears five times in the text—three of which come during the majority’s outrageous argument that “childbirth is 14 times more likely to result in death”.

Based on a sham claim that has been debunked every which way to Sunday, even if the “Abortion is safer than childbirth” argument had a shred of evidence to back it up, it would have nothing to say about how much safer for the child childbirth is as opposed to abortion.

The entire argument for abortion and “reproductive rights” the Supreme Court invented in 1973 hinges on denying any sort of moral value to the preborn child. He or she is entirely insignificant to this equation.

For evidence of this reality, another article Monday—this from the Riverfront Times in St. Louis—is one NARAL Pro-Choice Missouri employee’s boastful first-hand account of her recent abortion, where the writer recounts hosting a barbeque “to meet our friends’ new baby” in the hours following her own abortion.

Of course, it’s now clear that even the woman herself does not significantly factor into the question, since the case before the court actually bent the rules to represent the interests of a “third party”—a chain of abortion businesses with a “Whole Woman’s Health” sign hanging on the front door.

Who will protect the interests, liberties and rights of the Texas woman who needs rushed out of, say, Douglas Karpen’s abortion clinic on a gurney and hospitalized within a half hour?

The law was established to protect against predators like Karpen—the notorious “Kermit Gosnell of Texas.” Now, we are back to the worse-old days of front-alley abortions like those that took place unchecked for decades at Gosnell’s “House of Horrors” in Philadelphia.

“No more baby… taken care of.” These are words that should haunt us, and not just when we’re talking about the murder of a newborn.

Indeed, these are words that haunt tens of millions of women and men who have submitted themselves to the empty promises of abortion since it became legal on-demand in 1973.

What these women and men testify to every day in post-abortive group and individual counseling sessions at pregnancy help organizations all across the nation is the very truth that will play on loop in Weaver’s mind as she heads off to a state penitentiary: There’s no such thing as “no more baby.”

No question about it, Weaver needs our prayer. She needs to know the world-changing love of a Father who has borne the loss of His dearly loved Son. Weaver—like each one of us—needs delivered from the lie that has landed her in a prison of her own making.

“I,” “my.” This is the banner of the so-called “abortion rights” movement. This is the lie boiled down to a pronoun.

Yet, while one headline celebrates the onward march of the lie, another warns us against taking the lie at face value.