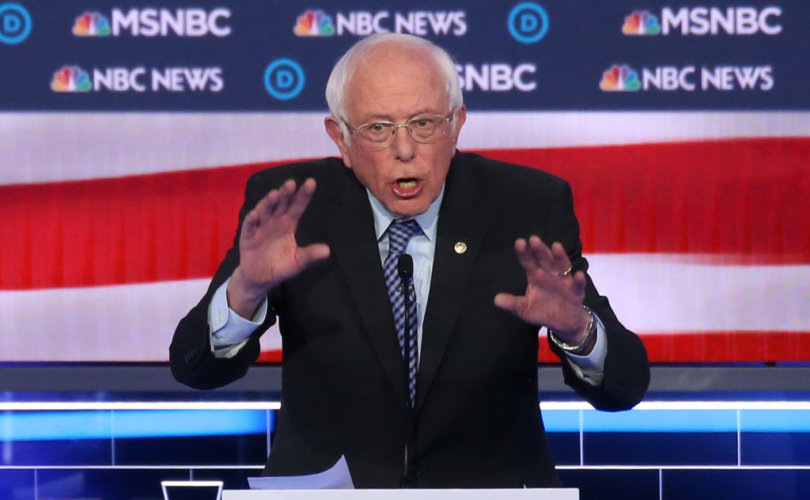 As I understand it, it is not that young Americans love socialism but that they think that capitalism and liberal democracy are guilty of much of the evil in the world: inequality, poverty, global crisis and even “climate change.”

As a survivor of socialism, I can tell from my own experience, that socialism is in fact the worst political system ever invented and yet, somehow, it still has the support of much of the mainstream culture. Socialism desires to be loved by everyone and that is why it proposes free healthcare, free education, equality, the elimination of corrupt extreme wealth.  It is also why socialism sees the family and religion as rivals for the love of the people.

Socialism, regardless of whether it is imposed by brute force in the 20th century, as it was in Poland from 1945 to 1989, or as it is still practiced in Venezuela, has some striking similarities with the medieval medical practice of phlebotomy or bloodletting.  That pseudo-science prescribed a treatment that consisted of extracting the blood from the patient for the supposed treatment of almost all ailments. Both in medieval medicine and under socialism, the loss of blood is supposed to heal everything. Unfortunately, in both cases, the unsuspecting patient usually ends up dead.

Socialism asserts that its ultimate goal is to transform human relations under a spirit of equality and justice, and that it is the natural enemy of exploitation. These are beautiful and far-sighted goals. The problem is that socialism not only does not solve any of the problems it sets out to address, but worsens them with an unrivaled effectiveness.

Socialism has a feature that it can never get rid of: that is, when it ascends to power, it acquires the characteristics of a state religion. The secretary general or head of the party becomes a deity who will never give up his throne. Those who do not profess the official state religion immediately become pariahs in their own country. Whether political opponents can be condemned to mere civic or actual physical death depends only on the stage that has been reached on the unavoidable devolution of socialism. Under socialism you can forget about God & Country, under socialism there is no god but the state and the secretary general is its prophet.

Universal history has proven this same pattern in every corner of the world where socialism has risen to power. And that is why the socialist state needs more and more police force, officials, guards and above all a secret army of volunteers: some of them mere gossipers and others willing snitches eager to betray their own friends or even their brother.

If no one trusts anyone, how can the welfare state be built? Socialism knows very well that it needs to protect the illusion of a benevolent state at all costs and more often than not it will do so with police force, because sooner or later the illusion is always challenged by free-thinking citizens who do not believe the falsehood presented by the reality of a socialist state.

Another thing that characterizes the socialist state is a permanent economic crisis, because a centralized, government-controlled economy always fails. History has taught us that it is the free market, with its immutable law of supply and demand that can adequately regulate the economy. The permanent economic crisis of a socialist democracy does consistently deliver one thing that it promises – that is, an unnatural form of equality, one in which everyone is average, and nobody envies anyone else because everyone lives under the yoke of poverty.

Have you ever wondered why the “socialist utopias” of the world always cause a mass exodus of the best workers and the most enterprising of men? Have you ever heard of a similar mass exodus from capitalist countries? Would anyone wish to live in a country that promises an island of full happiness but always ends up as a prison where there is neither bread nor toilet paper, and instead puts up a fence with barbed wire so you don't even think of choosing another “paradise”?

It is no joke, toilet paper was a thing of dreams for the Poles of my youth, not to mention ham or chocolate! Of course, such poverty requires free and frequent access to the doctor and the dentist.  But how is this to be done? The doctors in socialist utopias inevitably flee to the capitalist countries where their work is compensated.  And as for hospitals, in the socialist utopia of Poland, as must be the case in Venezuela, Cuba and most others, there are always a limited number of hospitals, to match the few qualified doctors; and so, being patient number 340 in the queue, most people in these utopias prefer to take care of themselves.

But don't worry! Socialism, as the extraordinarily corrupt system that it is, will offer you a fast and high quality alternative, but only in exchange for a handsome bribe. This is the point when you find out that free health care can actually be very expensive.

In socialist utopias, the bribe is the unfailing key to success. Wherever you go with a bribe, you will receive what you expect; you just have to learn how to bribe discreetly. In a socialist utopia, the bribe is king, if you learn to discretely bribe the doctor, the public official, the store manager, the police officer and all of those on whom your life depends, you might even live a comfortable life in your socialist utopia. Of course, it will not be easy to give away a bundle of money for these bribes, not only because you will not have it, but also because of the omnipresence of an amateur but efficient network of sneaks and snitches.

This is socialism in all of its glory: corruption and fear with a pinch of hate.

You hate people because, in this permanent crisis of poverty, the law of the jungle is applied, and everyone around you represents a threat. You also learn to hate your own country, because it constantly humiliates you and condemns you to an unbearable life (that is precisely why free education in socialist utopias is so useful for everyone.) The sooner you learn to become a proficient liar the better off you will be. Of course, at every level of your “free” education, right up to the university, the state will expect you to be a humble cog in the system, but the most important thing is that education is free, right?

In the end, the real goal of the socialist utopia is to destroy all competition for the love of the people; imagine no religion, no family, and no inequality.  To get there socialism will destroy churches, family values, and take all the wealth from the last few remaining rich who are able to survive the glorious socialist revolution.

Of course, none of these dystopic dreams ever become a reality.  People are made to love God.  People are made to be raised by families.  And yes, some people will accumulate more wealth than others.  At least on this last point, socialism seems to work quite well, not openly, but efficiently nonetheless.  Socialism and great personal accumulation of wealth coexists perfectly with the socialist apparatus of power, with the leadership of the party and with the forces of repression.  All of them will accumulate obscene wealth and power, while everyone else will live in poverty and repression.

This is the socialism that I know.  It is the real face of socialism. Perfect for the international socialist elite and a nightmare for everyone else.