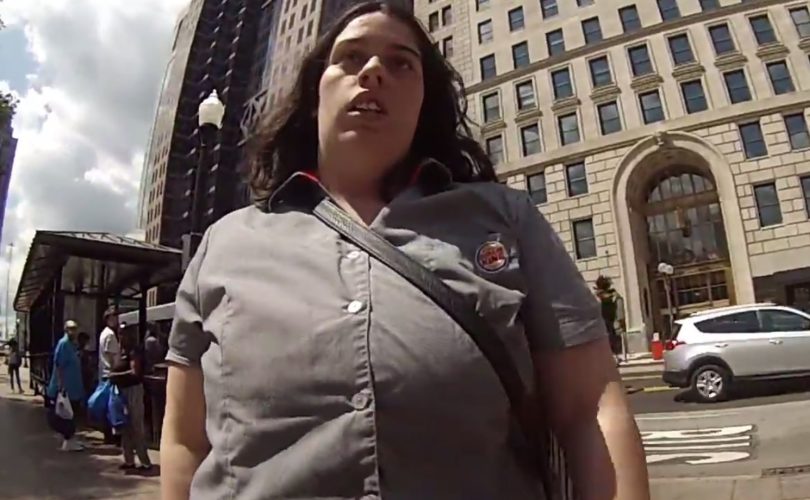 Burger King recently started a limited-market promotion of the Proud Whopper, which included the underlying message “We’re all the same inside.” It was supposed to be a show of support for San Francisco’s gay community, but it could also serve as Burger King’s stealth pro-life campaign. Since Burger King employee Victoria Duran of Columbus, Ohio seems to think that the unborn are just a “clump of cells,” the Proud Burger message can teach her that we’re all just bigger “clumps of cells.”

Ms. Duran is composed of many more cells than an unborn child, but no one is advocating that we kill her. It seems odd that she would a.) discriminate against someone with less cells than she, and b.) resort to assault and battery on the streets of Columbus because other clumps of cells are exercising their First Amendment rights.

As Hotair’s Ed Morrisey observes, “It’s amusing in one respect to see someone so passionately engaged in exposing her ignorance of human biology while attempting to lecture someone else about it, as well as her ignorance on basic American civics.”

As humorous as it is, it’s also rather frightening. While Ms. Duran ultimately has little power to strip social conservatives of their rights, there are plenty of “Durans” out there who would love to see that happen. Sometimes they expose themselves (literally) in places like Argentina when they assault Catholic men, or sometimes such bigotry rears its head when guys like Marvel Comics writer Dan Slott tells Hobby Lobby and its Christian supporters they should go to “Christ-land.”

Let us revisit Ms. Duran’s actual speech. While it is hardly eloquent, the intellectual DNA is similar among “clumps of cells” who categorize themselves as liberal.

The thought police are out in full force. Race? Class? Gender? It’s all there. “Privileged…white…males” only have free speech until that speech upsets women like Ms. Duran. Then it’s gone. Regardless, it seems odd that Ms. Duran would accuse a young man from Created Equal of being racist, when it is women like Ms. Duran that have arguably cheered on black genocide via abortion for decades.

What if science told us that certain DNA sequences are likely to result in a gay or lesbian child? Would Ms. Duran support abortion then? Does she support forced abortions in China? Burger King’s motto used to be “Your way, right away,” but in Ms. Duran’s world it’s “My way, right away. Understand me, punk?”

We used to live by the old saying: “I disapprove of what you say, but I will defend to the death your right to say it.” Today, a bunch of totalitarian thug wannabes don’t even give the phrase lip service — they just get in your face, destroy your property and threaten you with violence.

At the end of the day, it is not the Victoria Durans of the world who are the most dangerous to society as a whole. Instead, we must primarily concern ourselves with influential individuals sowing seeds of hate into the fertile minds of the young. Her consciousness is filled with weeds, but it is the farmer who planted them there that we should be concerned about.

Reprinted with permission from Douglas Ernst from his blog