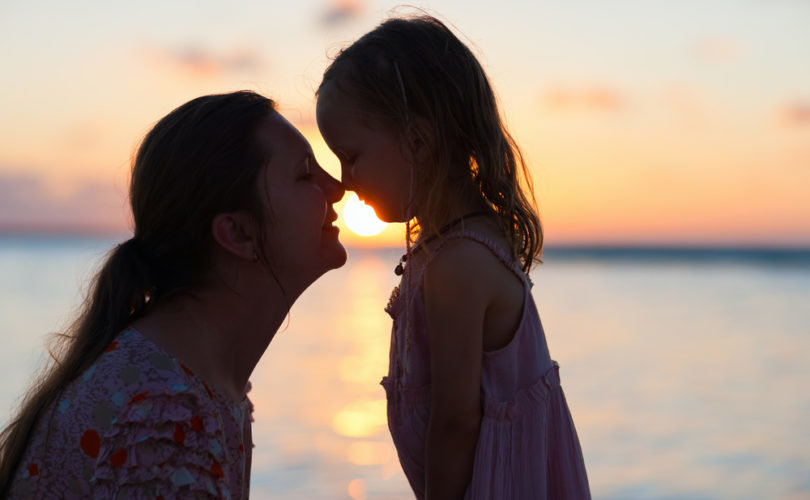 June is nigh, and with it will come your ruling on the most contentious political issue of our time: marriage.

I write because I am one of many children with gay parents who believe we should protect marriage. I believe you were right when, during the Proposition 8 deliberations, you said “the voice of those children [of same-sex parents] is important.” I’d like to explain why I think redefining marriage would actually serve to strip these children of their most fundamental rights.

It’s very difficult to speak about this subject, because I love my mom. Most of us children with gay parents do. We also love their partner(s). You don’t hear much from us because, as far as the media are concerned, it’s impossible that we could both love our gay parent(s) and oppose gay marriage. Many are of the opinion I should not exist. But I do, and I’m not the only one.

This debate, at its core, is about one thing.

The definition of marriage should have nothing to do with lessening emotional suffering within the homosexual community. If the Supreme Court were able to make rulings to affect feelings, racism would have ended fifty years ago. Nor is this issue primarily about the florist, the baker, or the candlestick-maker, though the very real impact on those private citizens is well-publicized. The Supreme Court has no business involving itself in romance or interpersonal relationships. I hope very much that your ruling in June will be devoid of any such consideration.

Government Should Promote the Well-being of Children

Children are the reason government has any stake in this discussion at all. Congress was spot on in 1996 when it passed the Defense of Marriage Act, stating:

There is no difference between the value and worth of heterosexual and homosexual persons. We all deserve equal protection and opportunity in academe, housing, employment, and medical care, because we are all humans created in the image of God.

However, when it comes to procreation and child-rearing, same-sex couples and opposite-sex couples are wholly unequal and should be treated differently for the sake of the children.

When two adults who cannot procreate want to raise children together, where do those babies come from? Each child is conceived by a mother and a father to whom that child has a natural right. When a child is placed in a same-sex-headed household, she will miss out on at least one critical parental relationship and a vital dual-gender influence. The nature of the adults’ union guarantees this. Whether by adoption, divorce, or third-party reproduction, the adults in this scenario satisfy their heart’s desires, while the child bears the most significant cost: missing out on one or more of her biological parents.

Making policy that intentionally deprives children of their fundamental rights is something that we should not endorse, incentivize, or promote.

The Voices of the Children

When you emphasized how important the voices of children with gay parents are, you probably anticipated a different response. You might have expected that the children of same-sex unions would have nothing but glowing things to say about how their family is “just like everyone else’s.” Perhaps you expected them to tell you that the only scar on their otherwise idyllic life is that their two moms or two dads could not be legally married. If the children of these unions were all happy and well-adjusted, it would make it easier for you to deliver the feel-good ruling that would be so popular.

I identify with the instinct of those children to be protective of their gay parent. In fact, I’ve done it myself. I remember how many times I repeated my speech: “I’m so happy that my parents got divorced so that I could know all of you wonderful women.” I quaffed the praise and savored the accolades. The women in my mother’s circle swooned at my maturity, my worldliness. I said it over and over, and with every refrain my performance improved. It was what all the adults in my life wanted to hear. I could have been the public service announcement for gay parenting.

I cringe when I think of it now, because it was a lie. My parents’ divorce has been the most traumatic event in my thirty-eight years of life. While I did love my mother’s partner and friends, I would have traded every one of them to have my mom and my dad loving me under the same roof. This should come as no surprise to anyone who is willing to remove the politically correct lens that we all seem to have over our eyes.

Kids want their mother and father to love them, and to love each other. I have no bitterness toward either of my parents. On the contrary, I am grateful for a close relationship with them both and for the role they play in my children’s lives. But loving my parents and looking critically at the impact of family breakdown are not mutually exclusive.

Now that I am a parent, I see clearly the beautiful differences my husband and I bring to our family. I see the wholeness and health that my children receive because they have both of their parents living with and loving them. I see how important the role of their father is and how irreplaceable I am as their mother. We play complementary roles in their lives, and neither of us is disposable. In fact, we are both critical. It’s almost as if Mother Nature got this whole reproduction thing exactly right.

I am not saying that being same-sex attracted makes one incapable of parenting. My mother was an exceptional parent, and much of what I do well as a mother is a reflection of how she loved and nurtured me. This is about the missing parent.

Talk to any child with gay parents, especially those old enough to reflect on their experiences. If you ask a child raised by a lesbian couple if they love their two moms, you’ll probably get a resounding “yes!” Ask about their father, and you are in for either painful silence, a confession of gut-wrenching longing, or the recognition that they have a father that they wish they could see more often. The one thing that you will not hear is indifference.

What is your experience with children who have divorced parents, or are the offspring of third-party reproduction, or the victims of abandonment? Do they not care about their missing parent? Do those children claim to have never had a sleepless night wondering why their parents left, what they look like, or if they love their child? Of course not. We are made to know, and be known by, both of our parents. When one is absent, that absence leaves a lifelong gaping wound.

The opposition will clamor on about studies where the researchers concluded that children in same-sex households allegedly fared “even better!” than those from intact biological homes. Leave aside the methodological problems with such studies and just think for a moment.

If it is undisputed social science that children suffer greatly when they are abandoned by their biological parents, when their parents divorce, when one parent dies, or when they are donor-conceived, then how can it be possible that they are miraculously turning out “even better!” when raised in same-sex-headed households? Every child raised by “two moms” or “two dads” came to that household via one of those four traumatic methods. Does being raised under the rainbow miraculously wipe away all the negative effects and pain surrounding the loss and daily deprivation of one or both parents? The more likely explanation is that researchers are feeling the same pressure as the rest of us feel to prove that they love their gay friends.

Like most Americans, I am for adults having the freedom to live as they please. I unequivocally oppose criminalizing gay relationships. But defining marriage correctly criminalizes nothing. And the government’s interest in marriage is about the children that only male-female relationships can produce. Redefining marriage redefines parenthood. It moves us well beyond our “live and let live” philosophy into the land where our society promotes a family structure where children will always suffer loss. It will be our policy, stamped and sealed by the most powerful of governmental institutions, that these children will have their right to be known and loved by their mother and/or father stripped from them in every instance. In same-sex-headed households, the desires of the adults trump the rights of the child.

Have we really arrived at a time when we are considering institutionalizing the stripping of a child’s natural right to a mother and a father in order to validate the emotions of adults?

Justice Kennedy, I have long admired your consistency when ruling on the well-being of children, and I implore you to stay the course. I truly believe you are invested in the equal protection of all citizens, and it is your sworn duty to uphold that protection for the most vulnerable among us. The bonds with one’s natural parents deserve to be protected. Do not fall prey to the false narrative that adult feelings should trump children’s rights. The onus must be on adults to conform to the needs of children, not the other way around.

This is not about being against anyone. This is about what I am for. I am for children! I want all children to have the love of their mother and their father. Being for children also makes me for LGBT youth. They deserve all the physical, social, and emotional benefits of being raised by their mother and father as well. But I fear that, in the case before you, we are at the mercy of loud, organized, well-funded adults who have nearly everyone in this country running scared.

Six adult children of gay parents are willing to stand against the bluster of the gay lobby and submit amicus briefs for your consideration in this case. I ask that you please read them. We are just the tip of the iceberg of children currently being raised in gay households. When they come of age, many will wonder why the separation from one parent who desperately mattered to them was celebrated as a “triumph of civil rights,” and they will turn to this generation for an answer.

What should we tell them?

Katy Faust serves on the Academic and Testimonial Councils of the International Children’s Rights Institute and writes at asktheBigot.com. She is the mother of four, the youngest of whom was adopted from China. This article is reprinted with permission from The Public Discourse.