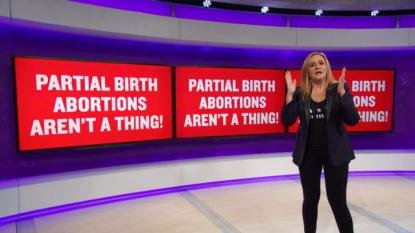 October 27, 2016 (EndtheKilling) — If there’s one thing you can count on from the media, it’s that when a pseudo-celebrity says something stupid that celebrates abortion, it will be lauded from the deserts of the Huffington Post to the wastelands of Salon.com as one of the most brilliant, prescient, and also hilarious monologues ever uttered by a kind-of-famous alleged comedian. Just lately, it’s been Bill Nye the Science Guy, Trevor Noah—he’s the guy at the Daily Show in charge of creating waves of nostalgia for Jon Stewart—and now, Samantha Bee, who hosts a charming show called “Full Frontal.”

Bee took umbrage at Donald Trump’s rather blunt description of partial-birth abortion as “ripping a baby out of the womb of its mother.” Bee and the rest of the media hive immediately went in to full damage control, lest anyone realize the gruesome truth about the procedure Hillary has spent her life promoting. Bee’s resulting monologue immediately garnered quite the buzz, as her friends in the media cackled with relief over her apparent “takedown” of Trump’s abortion comments.

First, Samantha Bee informed us lazily, nobody wants to hear a discussion on abortion. Which isn’t quite true. People who believe what Bee believes don’t want at discussion on abortion, because even buffoons like Donald Trump can articulate how savage the procedure is. Also, why was the Democratic National Convention this year basically a feticide infomercial if “nobody wants to hear about it?”

She then grabbed a bullhorn from her producer and bellowed at the screen: “Partial-birth abortions aren’t a thing!”

Well, except that they are. And nobody argues that they don’t happen. Except perhaps Samantha Bee, who has not yet been informed that her fellow feminists have moved on from this particular hill to kill on and are now insisting that nobody should care about brainless babies and disabled deadbeats, anyway. As National Review reported just after the media flew into a frenzy trying to claim that procedure Hillary had literally just affirmed her support for didn’t exist:

The reasons partial-birth abortions are done: Clinton made it sound as though partial-birth abortions are usually done for health reasons. This claim was frequently advanced during the early days of the debate over partial-birth abortion. It is untrue. Check out this 1997 New York Times story, or just read the opening line: “A prominent member of the abortion rights movement said today that he lied in earlier statements when he said a controversial form of late-term abortion is rare and performed primarily to save the lives or fertility of women bearing severely malformed babies.”

Samantha Bee then seamlessly slithers onto and promptly slips on her next point: “Partial-birth abortion is a non-medical term [made up by pro-lifers]—and was made illegal by the 2003 Partial-Birth Abortion Ban Act.”

Got that? Partial-birth abortion isn’t a thing. It was made up by pro-lifers, not invented by abortionists. And also, this non-existent thing that Hillary felt compelled to defend has been illegal since 2003, when George W. Bush signed legislation banning it. If none of those sentences seem to correlate, it’s because Bee seems to be cognitively incapable of forming a rational argument.

Newsflash, by the way, on why Bee is babbling on in such a distracted fashion: It’s because she doesn’t want to explain what the scientific term for partial-birth abortion—“intact dilation and extraction”—is all about. When utilized to complete a late-term abortion, it involves the nearly-full term baby girl or boy being pulled out of the womb and through the birth canal feet first—thus, the informal term “partial birth.” Then, the doctor inserts a sharp instrument into the living baby’s head, punctures the skull, uses a suction aspirator to suck the brains out, and then delivers the baby dead. The head has to remain in the birth canal during this procedure, by the way, or the doctor might meet the fate of Kermit Gosnell and end up in jail for infanticide. If you’re going to suck a baby’s brains out, it’s really all about location, location, location. In the birth canal: Hillary Clinton defends your compassionate skull-smashing with every ounce of ice water in her veins. Outside the birth canal: You might get prosecuted. Might.

In case you’re wondering why Bee so desperately wants you to think that partial-birth abortions are not a thing, here’s the gruesome Senate testimony of one nurse who witnessed the thing:

Brenda Pratt Shafer, a registered nurse from Dayton, Ohio, assisted Dr. Haskell in a Partial Birth Abortion on a 26-1/2 week (over 6 months) pre-born baby boy. She testified before the Senate Judiciary Committee (on 11/17/95) about what she witnessed.

According to nurse Shafer, the baby was alive and moving as the abortionist “delivered the baby’s body and arms – everything but the head. The doctor kept the baby’s head just inside the uterus. The baby’s little fingers were clasping and unclasping, his feet were kicking. Then the doctor stuck the scissors through the back of his head, and the baby’s arms jerked out in a flinch, a startle reaction, like a baby does when he thinks he might fall. The doctor opened up the scissors, stuck a high-powered suction tube into the opening and sucked the baby’s brains out. Now the baby was completely limp.”

And surprise! Hillary Clinton thought the Partial-Birth Abortion Ban Act was “extreme.” She voted against it. That’s right, not the act itself—but the legislation that sought to restrict the baby-skull-stabbing. No wonder Bee says “nobody wants to talk about this.”

Again, Bee is simply tragically misinformed to the point that the media should be embarrassed for celebrating her little abortion tirade, if the media was still capable of getting embarrassed about things. Anyone in the pro-life movement and any honest abortion activist will admit that while late-term abortions are indeed rare, they do sometimes happen for what Bee might call “selfish reasons.” As Slate.com—no friend of the pro-life movement—reported:

Martin Haskell, the Ohio doctor who developed the procedure, asserted in one paper that 80 percent of his patients choose it because it is safer and more convenient than the alternatives. There was no medical necessity. The other leading late-term abortionist, the now-deceased Dr. James McMahon, presented similar statistics before a congressional committee two years ago. These two doctors together performed 500 late-term abortions in one year, and there are at least eight other doctors who administer it–obviously, this adds up to more than 500 IDEs a year nationwide.

Bee, of course, ignores what the actual people in the abortion industry are saying about this and claims that abortions are only done for threats to the mother’s health—which, as the “father of Planned Parenthood” Alan Guttmacher has told us, is “not a thing”—and fetal abnormality. Which, of course, means that over 90% of babies with Down Syndrome are aborted. Which, of course, means that Clinton and Bee and the rest of these ghouls are appallingly ableist.

None of this is reported by the mainstream media, of course. Bee is the hero of the moment because she ran cover for Hillary Clinton and the abortion industry—just like Bill Nye the Science Guy, the guy at the Daily Show, the New York Times, the Huffington Post, CNN, MSNBC, and nearly every other major news outlet. Because if everyone was to be truly honest about what late-term abortion actually is, everyone would have to stop pretending that Hillary Clinton was the civilized candidate.