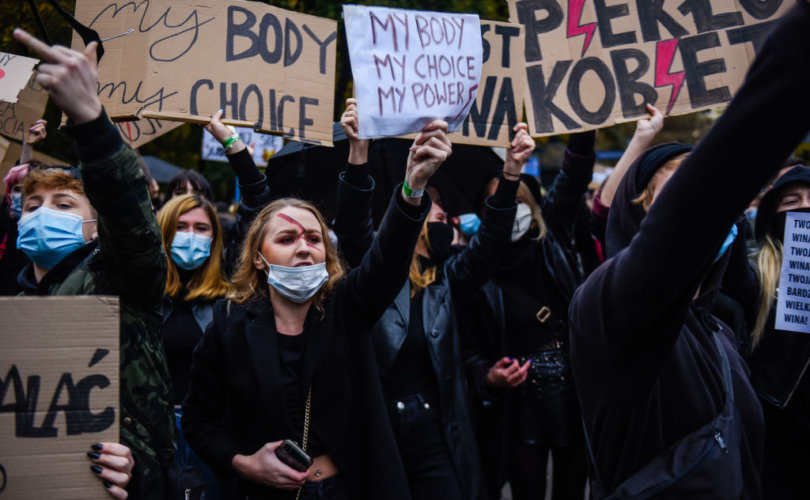 Women wear protective face masks and gesticulate towards a pro life counter protest during the fourth day of protests against the Constitutional Court ruling on tightening the abortion law at Krakow's UNESCO listed Main Square on October 25, 2020 in Krakow, Poland.Omar Marques/Getty Images

November 13, 2020 (LifeSiteNews) – We are in the middle of a global war. This is a war between the culture of death and the culture of life; it is a war between Marxist atheists who want to establish equality, and of believers in God, who want to establish justice; it is a war between those who will establish a totalitarian dictatorship by manipulation of mass consciousness, the jettison of law and the use of violence and those who believe in the power of God, nature and reason and therefore fight to freedom and justice. They know that God, nature and reason will win this war.

Presently in Europe the front of this battle is in Poland. We see that one nation after the other is falling away from God at an amazing pace. Spain, Italy, Ireland, Malta, to name just a few nations that have been deeply Catholic for centuries until very recently. Will Poland go down this road too, a nation that was able to withstand Nazi terror and communist dictatorship by the power of Catholic faith? All these once Catholic nations made incredible contributions to the culture of man in art, architecture, music, theology, literature, the establishment of justice through law, the moral foundation of society as the basis of the family – these nations now fall to the eternal temptation of the fraudulent snake in the garden of Eden:

But the snake is lying.

First of all: We will all die. Also you who vandalize churches and destroy statues of the mother of God, you will die too. It is not certain that your ashes will be recycled in a tree. You too have an eternal soul.

Millions of unborn children die because their mothers and fathers wanted to have sex without being ready to become parents. They prefer to kill the child and they fight for the right to kill the child at any stage of pregnancy, as does Joe Biden and Kamala Harris who may become the next leaders of the United States.

Maybe some of you only fight for the right to kill an unborn child that has a fatal abnormality. It also is a human being with dignity and a right to life. We do not want a society where only the healthy have a right to life. You can’t bear the thought that you might have to care for, let us say, a Down Syndrom- child. You believe your life would be ruined. No doubt, it is hard to accept such a fate. Parents of children with special needs should be highly respected and get every kind of help from their social environment and the state.

The radical feminists in Poland and around the world fight for more. They fight for a “human right” to abortion.

Dear women, are you aware what you are demanding? After the horrors and atrocities of World War II the nations came to a mutual consent that there are rights which every human being enjoys, simply because he or she is a human being with dignity. Of course, the protection of the right to life is the condition for any other human right. Is it really a human right, that some humans have the right to kill other humans? You started your life as an embryo, so did I. Were we anything else than a human being in the womb of our mother who allowed us to grow within her until she gave birth to you and to me?

Yes, there can be conditions where it is very hard to bear the lifegiving consequences of the sexual act, that is, the life of another human being. But in order to avoid this consequence do you really want to kill your child?

We casually use the word “abortion”, and count the numbers by the thousands, or hundred thousands or the millions: Around 50 million children are killed every year around the globe before they are born.

If you see yourself in a situation where the death of your child seems to be the only way out, you will have to choose between different methods, so it is good to know what they are. I will speak about seven methods of killing the unborn child.

The suction method at the early stages of pregnancy is a risky do-it-yourself method used where abortion is forbidden by law. The International Planned Parenthood Federation distributes such handy suction devices in countries with high birth rates and delivers plans for making them oneself. If the woman fears she is pregnant, this device is used to suck away the uterine lining. The risk for women is very high — from a punctured uterus or an infection to an incomplete abortion.

This is the method of choice up to the 12th week of pregnancy. The baby has a beating heart, little hands with fingernails, a fast-developing brain, male or female sex organs. The uterus is dilated, and a curette with a sharp tip is inserted into the cervix. The baby is cut up with this blade, and the uterus is scraped out. The abortionist or assisting nurse must check whether all body parts of the baby are present in the bloody mass, because if anything is left in the uterus, serious complications can follow.

A suction tube with a cutting instrument is inserted into the uterus and connected to a vacuum device. The baby’s body is cut into pieces and sucked out. Then the uterus is scraped out. Here also, the cut-up body parts must then be checked for completeness.

From the fourth to the sixth month of pregnancy, this process gets more difficult. The baby’s tissue is now stiff enough that it can’t be cut up. The cervix has to be spread wider, because larger instruments must be inserted. The baby’s arms and legs are cut off with a long, curved pair of scissors and are pulled out individually. The abortionist waits until the child has bled to death and then removes the torso. With larger babies, the head must be crushed, so that it can be pulled from the cervix in pieces.

This method is used from the second trimester to the start of the third trimester. The risks for the mother are very high, because the salt solution can get into one of the mother’s blood vessels.

About 200 milliliters of amniotic fluid is sucked out and replaced with salt solution. The baby swallows and inhales this solution. Over hours, it suffers an agonizing death through salt poisoning, dehydration, brain bleeds and cramps. Within 24 to 48 hours, the baby is born through induced contractions. The child is deep red. Mothers report that they can feel the baby’s wild movements during its hours-long battle with death.

The antiseptic Rivanol contains alcohol and is injected through the abdominal wall to mix with the amniotic fluid. Rivanol penetrates the tender, unprotected skin of the child in the uterus and destroys the cells. The high percentage of alcohol is very poisonous to the child, stops the heart relatively quickly and triggers contractions. This results in the stillbirth of a yellow-colored child.

The child is killed with an injection of poison to the heart. Viewing the baby through ultrasound, the abortionist sticks a long needle through the mother’s abdominal wall, seeks out the child’s heart, inserts the needle and injects a potassium chloride solution into the heart. The poison prevents muscle contraction, causing the heart to stop. The dead child is delivered by cervical dilation and expulsion using hormone injections. This method is used with in vitro fertilization if more than one fertilized egg has been implanted and multiple births are to be prevented.

These methods are mainly used in the United States to kill the child from the 24th week up until birth, or more precisely during actual birth. The abortionist uses ultrasound to determine the child’s position. He guides tongs into the uterus, grabs one of the child’s legs, and pulls the child out of the birth canal — all except its head. The child is alive and punches and kicks around. The abortionist places his fingers around the baby’s shoulders, shoves a dull pair of scissors into the lower part of the head, spreads the scissors to enlarge the hole, pulls the scissors out and inserts a suction catheter to suck out the brain. The skull collapses. Now the child can be pulled from the uterus.

Swallowing pills seems less brutal than surgical methods. RU-486 can be taken until the end of the second month of pregnancy. An extremely high dose of the synthetic hormone RU-486 blocks the hormone progesterone required for pregnancy. The uterus recedes, which strangles the child to death. The uterine lining dies, and the dead child is expelled. The child’s agony lasts many hours, during which it slowly dies of hunger, thirst and suffocation. There is a discharge, and the fetus usually ends up in the toilet.

Depression, sadness, broken relationship, unknown physical pains, breast cancer, infertility, a deep rooted feeling of guilt may be the consequence of any abortion, it is called the Post Abortion Syndrome. Doctors who earn money by killing thousands of babies will not tell you about it.

Dear sisters who fight for the right to kill your child, is this what you want? I am sure you don’t. You just can’t see a child in your life. But let me tell you: Life itself is extremely powerful. A living baby, tiny and helpless as it is, will find a place on this earth to exist together with you. Your baby will love you unconditionally, as you are. Countless women, who resisted the temptation of ending the life of their baby, give witness for the deep thankfulness that they did not fall into that trap, for the joy that their child gives them, for a meaningful life.

Is there anything more touching than the smile of a baby, the innocence, the pureness, the beauty, the soul that looks out of their eyes? Even if it was difficult to accept the pregnancy, even if the birth was painful, as it usually is, mother and baby are flooded with the hormone oxytocin, the hormone that gives happiness and creates bonding. When a child receives what it needs, it delights those around it with its smile, its untamed joy of life, its creativity, the light in its eyes, the radiance of its sleeping face, its complete, nonjudgmental acceptance of mother and father, of the world as it is. Parents witness the miracle of its awakening intelligence, the family rejoices in the words a child creates, the creativity of a free spirit, the declarations of love of the pure heart of a child.

When the mother’s heart is near to the child, then the world is new to her as well. No one accepts you as completely as your own child. This will be a path to your own healing. A child will bond you to life itself, it will bond you to the future. The love you give to a child now, will come back to you, once you need the love and caring of your children. We all want to make the world a better place. We do not make it a better place by killing unborn children. If you accept your child with your heart, give your loving motherly care to your child, if you are willing to make sacrifices for the wellbeing of your child, it might well be that your child will make the world a better place. Joy and deep satisfaction by fulfilling your motherhood as long as it is needed will be the reward. You will not face gruesome loneliness when you are old.