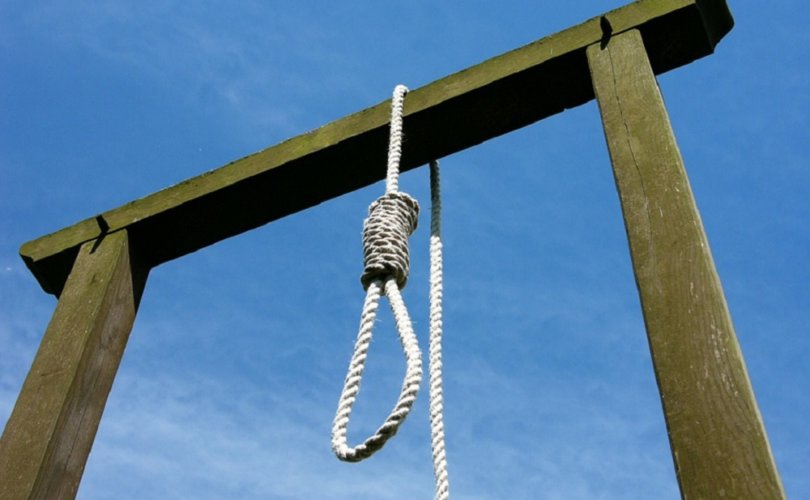 August 3, 2018 (The Catholic Thing) – While writing this column, on another topic, I was distracted by a friend. He had me look at the news for “the latest” from Pope Francis. I was told he had changed Church teaching on the death penalty, by an amendment to the Catechism. Quickly checking the usual Internet sites, I found this rumor confirmed in many places. While I do not trust “the meejah,” generally, I fear in this instance the reports are true.

Moreover, I was expecting this to happen. The “new teaching” had been signaled by the Holy Father many times. He has also, incidentally, signaled his opposition to life imprisonment, on the same grounds, as an affront to human dignity, and an impediment to redemption.

I am no Vaticanist, and thus no expert to predict whether this will be his only formal alteration of the Catechism, or the first in a series. It provides a precedent that future popes may work with, alas. Bergoglio has broken the lock on the door, but I think he takes a longer view of his action.

On many fronts he has done, or proposed, something similar: “just one little change,” for instance, about admitting the divorced to Communion, or refusing to reply to reasonable dubia, or making whimsical statements on the afterlife and a great range of other topics, most memorably: “Who am I to judge?”

At a time when the Catholic Church endures spiritual catastrophe, he has decisively re-focused from the interior and sacred, to the exterior and profane – in effect from religion to politics, of an unmistakably left-liberal stamp, changing the demeanor of his office by his dress and gestures, his appointments, and so forth.

My impression – that he is systematically undermining the integrity of Catholic teaching, and politicizing what was once apolitical – may be discounted. It is only my opinion. In the realm of fact, I simply notice that the Church is at war within herself, with rival factions, “traditionalist” and “modernist.” One would have to be obtuse not to notice.

On the question of capital punishment, my first, rather naïve question was, “Can he do that?”

Of course he can. Any pope could have rewritten any part of the Catechism, with which he happened personally to disagree, at any time through the centuries. But even popes such as Borgias and Medicis never tried it on. They broke rules but did not try to “revise” them.

The damage that is done, and will be done, by this latest breach of “papal etiquette,” is broader and will be broader than first appears. Beyond the creation of a precedent for altering Church teaching by papal fiat, it confirms the politicization of our doctrine. Henceforth, and for the foreseeable future, the Holy See (even after Bergoglio's demise) is re-oriented to social and political issues.

Let me try to explain what may seem over-subtle. The very character of the Church is subverted by this. The question of salvation – the centrality of Jesus Christ, in other words – is replaced with very worldly, subsidiary questions of “who gets what.” Worse, in some ways, than being contradicted, Christ is progressively ignored.

For the questions on which we are now focused are the very ones which Christ pointedly avoided. His Kingdom was not of this world, and explicitly in the Gospels, the authority of Pontius Pilate was not challenged. The thief crucified with Our Lord acknowledged the validity of his death sentence.

Christ's own representative human dignity was compatible with being stripped and tortured, publicly humiliated, marched to His execution, mocked upon the Cross. This was a matter that went beyond shallow issues of political injustice.

The very sanctity of innumerable saints was untainted by martyrdom. For human dignity is conferred by God in the Creation, not by the State. The “capital punishment” even of the innocent – and especially of the innocent – cannot be reduced to public policy. Or, it cannot be so reduced in the teaching of Holy Church.

We received, at the foundation of our Church, a transcendent teaching. Death itself has no dominion: this is what Christ taught. His willingness to make himself the exemplar of martyrdom is diminished when questions of “social justice” are “prioritized.”

At another level, the rewrite of paragraph 2267 of the Catechism brings into scandal all the previous social doctrine of the Church. It compels the thoughtful observer to consider how far ecclesiastical efforts to accommodate the realities of industrial, social, and political revolutions through the last two centuries may have led us astray.

Have we not got here by increments, in which the teaching of the Church was not altered, but the spirit of obedience was disrupted? Now we accept the alteration of the teaching itself, because it is not in accord with “the times.” Have we not been pushing at the edges for a while?

Perhaps we sometimes forget that “the times” include a future we cannot know, as well as a past that will always be murky.

I was myself opposed to capital punishment most of my life. And when I changed my view, I nevertheless held that it was poor tactics so to insist upon it, that it comes to dominate and emotionalize all discussion of crime and punishment.

The wisdom of restricting ourselves to Christian inspiration – to what can be apprehended in Scripture and Tradition from our beginnings – was previously understood. Perhaps the greatest (and most monstrous) achievement of modernity was to unhinge this.

“Render therefore to Caesar the things that are Caesar's.” The statement was not some passing tactical feint. It embodies the whole Catholic attitude to the worldly.