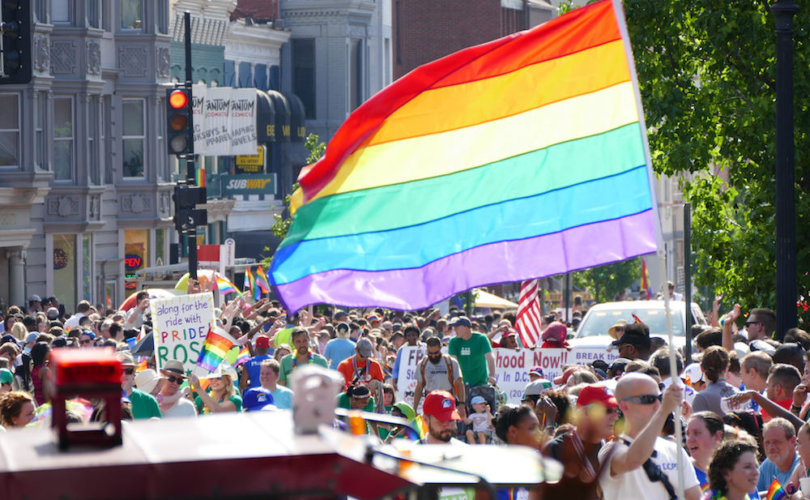 November 15, 2016 (REAL Women) — Those who are setting our so-called “values”, such as the small but powerful group of academics, mainstream media, and homosexual activists, do so by attempting to impose strange myths and ideas that have no scientific basis.

These myths include the one that homosexuals are “born that way”, can’t change, and must be accepted for “who they are”. Further, those claiming they are a different gender than that with which they were born, i.e. the transgendered, who “feel” they belong to other than their gender at birth, must be accepted as such.

The public is supposed to put aside its intelligence and common sense, and respectfully bow collectively in obeisance to these “expert” opinions. These opinions, however, are complete and utter hogwash.

We know instinctively that they are not authentic, or worthy of our belief. However, the myth-makers attempt to force their nonsense on us by the heavy hand of the law, claiming that it’s “discrimination” to refuse to accept the myths as truth.  Jurisdictions which don’t obey their rulings are economically punished, parents are forbidden to protect their children from the monstrous “bathroom” laws that permit males to use girls’ showers, lockers and change rooms.  It’s all a fraud based on propaganda with no scientific legitimacy.

However, two bombshells have exploded that have shattered these myths, and the opinion-makers haven’t yet controlled its fall-out.

The first bombshell was a landmark study published in The Journal – The New Atlantis, (August 23, 2016). The Journal is a well-known journal of science, technology and ethics based in Washington D.C.  This article analysed the scientific evidence of LGBT issues published to date in scientific journals.

The report was authored by two eminent scholars. Dr. Lawrence Mayer, a professor of psychiatry and statistics and biostatistics at Arizona State University, stated in the preface to the study that he has testified in dozens of federal and state legal proceedings strongly supporting equality and opposing discrimination for the LGBT Community. However, Dr. Mayer stated he supports every sentence in this report without reservation since it is about science and medicine.  He also stated he was alarmed to learn during his review of over 500 scientific articles that the LGBT community bears a disproportionate rate of mental health problems compared to the population as a whole.

The other author is Dr. Paul McHugh, one of the leading psychiatrists in the world. He was psychiatrist-in-chief at Johns Hopkins Hospital in Baltimore from 1975 to 2001.  These scientists reviewed hundreds of peer reviewed studies on sexual orientation and gender identity from the biological, psychological and social sciences.  Their conclusions were as follows:

The second bombshell was exploded by a top researcher for the American Psychological Association (APA), lesbian activist, Dr. Lisa Diamond, co-author-in-chief of ‘the APA Handbook’ of sexuality and psychology and one of the APA’s most respected members.  She admitted that sexual orientation was “fluid” and not unchangeable.  By doing so, Dr. Diamond confirmed that the myth that “homosexuals can’t change” is now a dead-end theory.  She summarized the relevant findings in a lecture at Cornell University stating that abundant research has now established that sexual orientation – including attraction, behaviour and self-identity – is fluid for both adolescents and adults for both genders.

Her announcement flies in the face of legislation in several U.S. states and Ontario, Canada, which ban “reparative therapy”, which seeks to help patients experiencing same-sex attraction.

It also destroys the argument by homosexual activists that sexual orientation is the “civil rights movement of our times”.   This is poppycock.  Sexual desire is based on something other than genetics, including primarily, a person’s relationships, culture and other experiences, not genetics or prenatal hormones.

The only thing that science actually tells us is that we are born either male or female.

Errant, harmful ideologies and lies, especially those which diminish and endanger the lives of children, should be condemned without delay.

Clearly, the laws on sexual orientation and the transgendered must be reassessed in light of the truth now being exposed. We can waste no more time on such inanities.

Reaction of Homosexual Activists and the Media

The mainstream media ignored these bombshells. The homosexual Human Rights Campaign (HRC), however, was not about to allow them to affect its continued existence, and the estimated nearly $49 million it hauls in annually from contributions, which maintain its luxurious headquarters in Washington D.C.  More importantly, it was not about to relinquish the tremendous power and influence it holds over society – especially the law makers and the media.

The HRC reacted as it usually does when its power base is threatened. It is to attack, attack, and attack.  On this occasion, it went for the jugular of the New Atlantis Journal, which had defied it by exposing the true facts about homosexuality.  The HRC published a criticism of the Journal’s research review, characterizing Drs. Mayer and McHugh as “Anti-Trans All-Stars”, and “anti-LGBTQ” promoters seeking to “marginalize” and mock people.  They accused the authors of intentional “misleading statements” and “biased interpretations.”

The editors of the New Atlantis Journal, however, were not about to put up with HRC’s nonsense.  The latter was only lies and distortions.  In a special publication entitled “Lies and Bullying from the Human Rights Campaign” it delineated how HRC had distorted the journal’s recent publication on homosexuality stating in the introduction “Most of the HRC document is an exercise in distortion”.  It then tackled in detail these distortions.

We can also be assured that HRC is scrambling behind the scenes to find suitable ideologically correct researchers to commence a study, funded either by the HRC directly, or, more probably, by one of the corporate mad dogs held in its kennel, to dispute the study in the New Atlantis Journal and APA.  When this new study is released, probably within a year, it will be with great fanfare and extensive coverage in the media.  It will be presented as “The Truth”.  It will, however, be a fraud and deceit based on flawed methodology.  How can it be otherwise, when its findings are pre-determined?  The purpose of the study will be for propaganda only and it will be merely a feeble house of cards.  It should be disregarded by those with any intelligence and common sense with the knowledge that such a study is only an attempt by well-funded homosexual activists to continue their control over society.