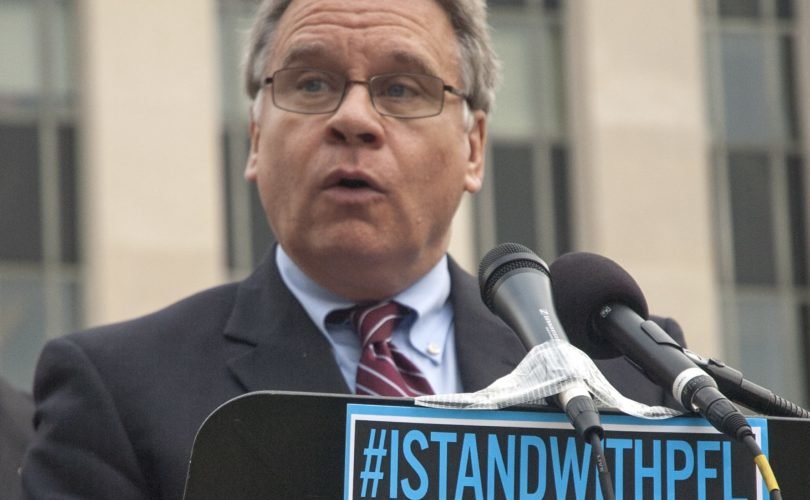 July 15, 2016  (National Right to Life News) — Thank you, NRLC, for four decades of extraordinary leadership in defense of the weakest and most vulnerable. What a truly amazing team of smart, faithful and faith-filled doers of the word — Carol, David and Darla, and Doug Johnson (the most effective policy guy in Washington) and the rest of the team. May God continue to give you — and all NRLC affiliates — strength and wisdom.

I am joined tonight by my dear wife Marie — we actually met in the pro-life movement in college; she is director of the Parliamentary Network for Critical Issues (PNCI) — part of Fr. Frank Pavone’s family of ministries — and our two daughters — Melissa and Elyse.

In 1976 — 40 years ago — I was at the National Right to Life Convention in Boston, as a presenter on working with the media, when Congressman Jim Oberstar of Minnesota arrived to announce spectacular news — passage of the Hyde Amendment.

All of us in the room that day — including some in this room tonight — rose to our feet in sustained almost wild applause, filled to overflowing with gratitude to God and deep respect for courageous lawmakers like Henry Hyde, Jim Oberstar and Silvio Conte.

The early Hyde battles were protracted and bitter — 11 weeks of struggle with the Senate in 1976 and five months of impasse in 1977.

By 1979, however, pro-life riders like Hyde had been added to six appropriations bills.

Today, numerous abortion funding restrictions ensure that taxpayers aren’t complicit in the violence of abortion. (This past Wednesday, we successfully defeated a floor amendment by Congressman Grayson of Florida to strike the abortion funding ban in the Federal Employees Health Benefits Program.)

Before the enactment of Hyde, the Medicaid program was paying for about 300,000 abortions annually. When abortion funding is proscribed, there is a body of empirical data that suggests that about a fourth of the children who would otherwise be killed are spared and born.

I remember the day when Henry first learned that an estimated one million children were alive because of the Hyde Amendment. He was filled with emotion and joy — mothers spared the agony of post abortion pain, children alive and well, growing up, going to school, playing sports, dating, marrying and having kids of their own. All because the abortion facilitating subsidies were prohibited by law.

Henry Hyde was one of the most accomplished and most distinguished Members of Congress ever to serve. He was a class act.

On the human rights issue of our time — the fundamental right to life for unborn children — Congressman Henry Hyde will always be remembered as the great champion. No one was more logical, compassionate or eloquent in defense of the disenfranchised. In floor debate, you always wanted Hyde as your closer.

And no one more skillfully navigated the legislative terrain as he. For example, in 1993, President Bill Clinton and Democrat majorities in both the House and Senate eviscerated every pro-life funding rider but one by using a house rule that precludes legislating on an appropriations bill unless a waiver is first granted by the Rules Committee.

Undeterred, Henry Hyde found and employed a 1908 parliamentary precedent in the rules that govern Congressional procedures that allowed the Hyde Amendment to be offered, debated and voted upon. Caught by complete surprise, pro-abortion lawmakers and abortion industry lobbyists outside the chamber in the hallways were certain we wouldn’t even be permitted to vote on Hyde that day. We did and won in the House, and by the grace of God, prevailed in the Senate and the Hyde Amendment was preserved.

Now after 40 years the Hyde Amendment and all pro-life policies are at serious risk again.

Hillary Clinton — who aspires to be the abortion president like her husband and Mr. Obama — has vowed to decimate the Hyde Amendment and every pro-life policy on the books. Like Mr. Obama, she is against the Pain-Capable Unborn Child Protection Act, the ban on sex selection abortion, and the Born Alive Survivors Protection Act. She has vowed to reinterpret the Helms Amendment in order to massively and directly fund the performance of abortions in our foreign aid programs. And she will abortion litmus-test every judge and justice.

Yet today, more Americans support the sanctity of life and oppose taxpayer funding for abortions than ever.

A January 2016 Marist poll found a super majority –– 68 percent of all respondents — and 69 percent of women — oppose taxpayer funding for abortion.

In “awe” of Margaret Sanger, who said in 1921, “Eugenics … is the most adequate and thorough avenue to the solution of racial, political, and social problems.” And who also said in 1922, “The most merciful thing that a family does to one of its infant members is to kill it.”

Mrs. Clinton is in awe of a eugenicist?

In her speech, Mrs. Clinton also said Sanger’s “life and leadership” was “one of the most transformational in the entire history of the human race.” Transformational for sure but not for the better if one happens to be poor, disenfranchised, weak, a person of color, vulnerable or among the many undesirables who Sanger would exclude and exterminate.

On the positive side our movement is winning hearts and minds — especially among the young.

There are children on this earth because of you — please don’t forget that. And women who are glad you were there to help them avert personal disaster and still other post-abortive women who have found reconciliation, renewal and hope because of your outreach — don’t forget that either. Things would be far worse if you and I weren’t standing in the gap.

Be assured and reminded again — you are the most selfless, compassionate human rights defenders on earth, filled with persevering faith in God, abiding hope, and genuine love.

Together, we’ve learned to trust God no matter what, manage our disappointments and redouble our efforts when faced with crushing setbacks like the Supreme Court decisions several days ago.

We are winning hearts and minds because post-abortive women are silent no more and are courageously speaking to the harm they’ve endured and are pointing the way forward.

And we are winning hearts and minds because of sonograms –– the game changer.

Countless parents have watched with awe and wonder as their child appears on the screen, especially for the first time –– moving about, even sucking his or her thumb.

First baby pictures today are of the child before birth. That first picture is a powerful confirmation that they are parents now. And that birth is merely an event in the life of the child.

Ultrasounds have been an effective tool in helping diagnose and treat disease and disability for these young “patients.”

Abortion is the polar opposite of life –– it is violence against children.

Because President Obama has reneged on another promise and has refused to enforce the Weldon Amendment — conscience protection from government abortion coercion — next Wednesday, under the tremendous pro-life leadership of Speaker Paul Ryan and the Majority Leader Kevin McCarthy and the entire House Republican leadership, the House will vote on the Conscience Protection Act, sponsored by Congresswoman Diane Black.

It is important that we rally the grassroots to encourage and thank our friends in Congress while holding opponents of commonsense conscience protection to account.

Together we are building a pro-life future not just for America but for the world. Thus our work has never been more challenging, more urgent or more necessary.