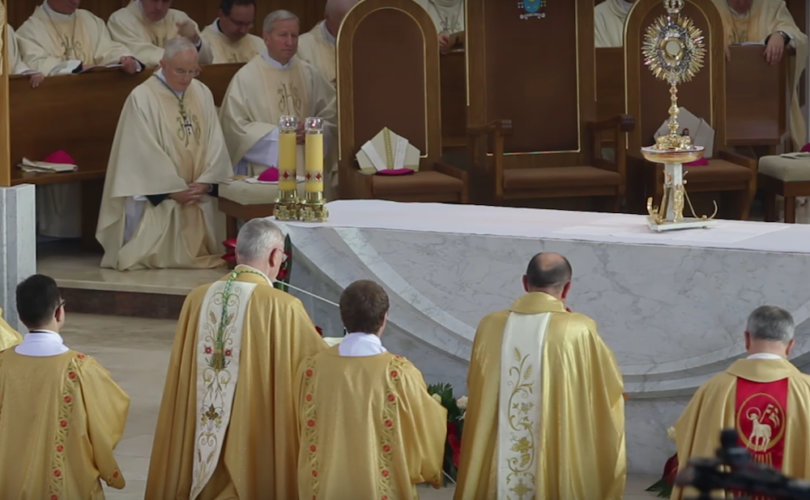 July 16, 2019 (LifeSiteNews) — American journalist Rod Dreher wrote a series of articles during a recent visit to Poland for the American Conservative proclaiming the inevitable, Irish-style death of Polish Catholicism with alarming titles like “Poland’s Crisis” and “Alas for Fortress Poland.”

As a Pole and American who has spent a third of his life in Poland and has written many popular and academic articles on the country’s history, culture, society, and religion, I feel competent to respond to his pessimism. Yes, secularism is growing in Poland, but the real picture is not quite as dire as Mr. Dreher writes.

Dreher’s articles basically summarize his conversations with young, conservative Polish Catholics who told him the same thing: Poland’s Catholic Church, which gained moral credibility during the Solidarity era, is now losing its authority in society as a result of sex-abuse scandals among part of the clergy (this phenomenon in other parts of the world has caused Dreher to leave the Catholic Church for Orthodoxy, even though denomination is not the cause for the sexual abuse of minors, as the examples of Southern Baptists, Orthodox Jews, Jehovah’s Witnesses, Buddhist teachers, and, yes, Dreher’s current denomination show).

Dreher claims that this issue has become prominent since May 11, when investigative journalist Tomasz Sekielski’s documentary about clerical sexual abuse in Poland, Just Don’t Tell Anyone, was released. Thus, inevitably, an Irish-style collapse of Catholicism will occur in Poland. “We all say that in 10 years, Poland will be a second Ireland,” Dreher quoted one of his sources.

Dreher’s articles rely almost exclusively on anecdotal evidence. As someone who lives in the heart of Krakow, I have seen a lot of anecdotal evidence showing that while many Polish Catholics are upset about the scandals, that has not led them to throw out the baby (their faith) with the bathwater (the grave sins of a minority of clergymen). I go to different parishes for Sunday Mass, and since Sekielski’s film’s premiere I have attended Mass at different churches. Nowhere did I see the churches emptier than usual.

I have many Catholic friends in Poland, and not a single one has abandoned religious practice. Recently, I met a 34-year-old Salesian priest in Krakow at a rollerblading event, of all places (you don’t meet many inline skaters in cassocks). After talking for some time, I asked if he experienced any aggression in Poland during the past few months. He said he did not, nor did he notice any decline in attendance at his parish. What’s more, he told me that in recent months several of his parishioners personally thanked him for his service as a priest, something that had not happened before. He believed that his parishioners felt priests were being unfairly attacked as a whole.

Indeed, many Poles are angry at those priests who abused minors and their superiors who responded leniently or not at all to their crimes. Two things have to be said, however. First, Polish anti-clericalism is very old, and it does not necessarily involve rejection of the faith, like Spanish, French, or Portuguese anti-clericalism. A classic of Polish Enlightenment literature is 1778’s Monachomachia: The War of the Monks. This poem, which by all definitions can be regarded as anti-clerical, is about a conflict between the Dominicans and Carmelites and criticizes the clergy for its vanity, materialism, drunkenness, and stupidity. It was penned by none other than Ignacy Krasicki, who was … a Catholic bishop.

It is common for Polish Catholics to criticize their parish priest for driving an expensive car or gossip about his close relationship with his gosposia (a function common in Poland; a woman who cooks and cleans for a priest), yet never consider leaving the Church. Many Poles realize that we go to church to encounter Christ, not the priest, who is only the administrator of the sacraments.

Second, it would be unfair to criticize the Polish bishops en masse for their treatment of the sexual abuse scandal. Sekielski’s documentary gives rise to questions about how Sławoj Leszek Głódź, archbishop of Gdansk, responded to this issue. My own bishop, Marek Jędraszewski, has made some very unwise comments about clerical abuse.

On the other hand, other bishops have responded to this problem admirably. Take the charismatic, extremely popular archbishop of Lodz, Grzegorz Ryś. His recent guidelines for how priests in his archdiocese should approach children have been somewhat controversial … for going too far. Recently, he sent instructions to all his priests that require them to avoid not only contact with children in intimate areas but also taking children older than three into their arms or complementing them on their physical appearance.

Sekielski’s documentary also prompted the Polish bishops, led by the country’s primate, Archbishop Wojciech Polak, to hold an emergency session. The bishops issued a letter, intended to be read in every Polish parish, in which they greatly apologized for not doing enough to combat sexual abuse. The letter was filled with sensitivity for the victims of abuse and featured no apologetics. The Polish bishops have also taken concrete steps to stop this problem, such as deciding to establish a solidarity fund to provide aid in the form of therapy and legal representation for the victims of sexual violence by priests.

Dreher quotes one of his sources as saying, “I don’t know a single Catholic, of my generation or of any generation, who is satisfied with the bishops. Everybody is angry over the way they have handled the abuse scandal.”

From my experience, most committed Polish Catholics are intelligent enough to realize that while the behavior or statements of some bishops, such as Głódź or Jędraszewski, are questionable, to put it charitably, there are others, such as Polak or Ryś, who deserve respect for how they have handled this situation.

Perhaps the most tangible evidence that Poland is not, at least now, headed for an Irish-style moral collapse is the fact that during the recent elections to the European Parliament, held just two weeks after the premiere of Sekielski’s documentary, the conservative Law and Justice party, whose rhetoric is strongly Catholic, received 45.38 percent of the vote. This is more than any Polish party has received in any elections after 1989.

Meanwhile, LGBT activist Robert Biedroń’s “Spring” party, whose electoral platform mostly consisted of attacking the Church and promoting abortion and the LGBT agenda while being widely supported by the left-liberal media, received a measly 6.06 percent, barely crossing the electoral threshold of five percent.

Mr. Biedroń is quite similar to Leo Varadkar, Ireland’s prime minister who introduced extremely permissive abortion laws. Both men are openly gay, telegenic, harshly critical of the Church, and almost the same age (born in 1976 and 1979, respectively). Yet the social climate in Poland is such that someone who by all measures could be described as a “Polish Varadkar” did poorly at the polls.

The results of the May elections were widely perceived as partly reflecting the fact that a large segment of Polish society, while disgusted by the crimes of individual clergymen, felt that such scandals were used as an excuse to attack what was dear to them. Jarosław Kurski, deputy editor of the left-wing Gazeta Wyborcza, blamed Law and Justice’s decisive victory on three factors: “propaganda, the Church, and social spending.”

Indeed, during the elections to the European Parliament, a climate of a culture war permeated the Polish air more so than the smog for which the country is infamous. At the beginning of May at the University of Warsaw, Leszek Jażdżewski, editor of the progressive journal Liberte!, gave a speech introducing Donald Tusk, president of the European Council who publicly supported Poland’s opposition during the electoral campaign. Jażdżewski called the Catholic Church a “pig” that had lost its moral credibility as a result of sex scandals.

That same month, participants in Gdansk’s gay pride parade wielded a parody of a monstrance shaped like a cartoon vagina. In other words, if Polish society were amid an anti-Catholic revolt, May 26, 2019, would have been the perfect time for it to vote for the left.

In the two months that have passed since the premiere of Sekielski’s film, the fact that Polish Catholicism is still strong was on display in Rzeszow, where more than 50,000 people (mostly youths) attended a worship concert on Corpus Christi, and in Lednica, where over 60,000 young Poles attended the annual Mass and prayer meeting.

The only statistic Dreher cites in his articles is a Pew Research poll showing that of several dozen countries surveyed, Poland has the biggest gap between the percentage of people over 40 and those under 40 attending religious services.

It cannot be denied that young Poles are less religious than their parents and grandparents. However, the cited Pew poll is an outlier compared with similar studies of public opinion. For instance, according to a survey published late last year by Poland’s national statistics office, 50 percent of Poles attend religious services once a week or more. Weekly attendance is lowest among 25- to 34-year-olds at just 36.1 percent, but among 16-to 24-year-olds, it is 44.4 percent, not much lower than the national average. (The study also reports that rates of religiosity remained unchanged from the previous study three years earlier.)

Meanwhile, a study by St. Mary’s University Twickenham London conducted at the same time as the Pew survey shows that of 22 European countries, people age 16 to 29 are most religious in Poland by a huge margin, 39 percent attend religious services weekly, and 82 percent identify as Catholic.

If young Poles are less religious than older generations, those Poles who practice their faith do so more out of a strong conviction, less so because of social norms and pressures, as many of their parents and grandparents. Despite the fact that this year World Youth Day was held in Panama, an extremely expensive flight for most Poles, who are less affluent than western Europeans, and in January to boot, when school is in session and Polish university students are overdosing on caffeine in libraries cramming for finals, Poles were the largest group of European participants.

Meanwhile, last year an excellent article was published in the weekend edition of the conservative daily Rzeczpospolita titled: “The Beautiful Church That Statistics Do Not Show.” It reported that while Mass attendance has been gradually slipping in Poland (falling from 51 percent to 38.3 percent between 1980 and 2017), in recent years many very vibrant religious communities attracting growing numbers of Poles committed to their faith have sprouted. This is certainly the case in Krakow, and the overwhelming majority of those involved are under 40.

Poland is not an island, and especially in the age of the internet, it is not immune to global trends, including secularization. The Church everywhere – even in sub-Saharan Africa, where it is booming – experiences difficulties, including in Poland. However, Dreher’s predictions of an imminent meltdown of Polish Catholicism are exaggerated.

God only knows what the future will bring. I will say, though, that I have been following Polish public life since 2006. Since then, I have constantly heard the phrase “Polish churches will be empty like in Western Europe within a decade,” often from the mouths of concerned Catholics. According to these predictions, this should have happened three years ago.