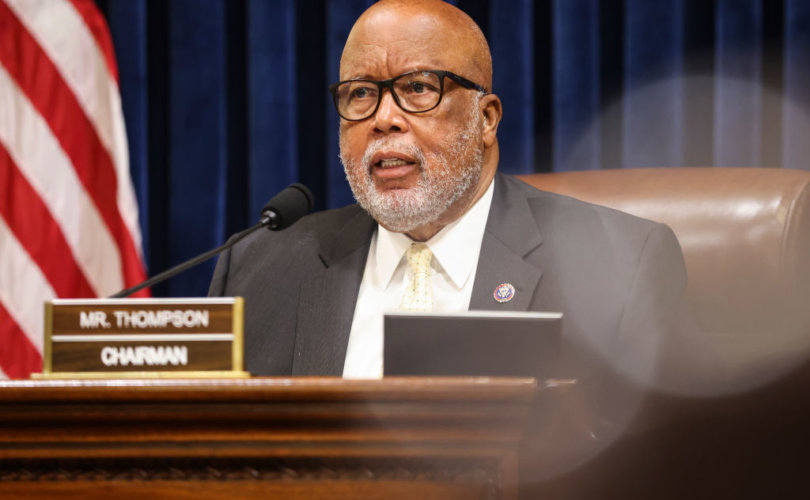 Rep. Bennie Thompson, in a hearing by the House Select Committee on July 27, 2021.Oliver Contreras-Pool/Getty Images

(WND News Center) – Meet Rep. Bennie Thompson, the little-known Mississippi Democrat who chairs the congressional commission that blames the Jan. 6 “insurrection” on Donald Trump, on you, on the MAGA crowd – not on FBI provocateurs.

For 50 years, he’s been a radical’s radical – openly sympathizing with a secessionist group known as the Republic of New Africa that blamed law enforcement for instigating violence that resulted in the killing of a police officer and wounding of an FBI agent.

Back then, the shoe was on the other foot.

Back then, FBI counterintelligence memos warned of imminent “guerrilla warfare” against the United States by the Republic of New Africa – or RNA. You probably never heard of the RNA, yet Bennie Thompson kept it alive until 2013 when he campaigned for the group’s former vice president to be mayor of the biggest city in Mississippi.

All of this is still on the public record – documented in newspapers, video footage and state and FBI archives. John Solomon did some awesome reporting on Thompson for Just the News.

That’s the rap on the congressman – a subversive, a true and proud insurrectionist!

It’s not unusual for leftists to change their stripes as Democrats. Take Rep. Bobby Rush of Illinois. He was the cofounder of the Black Panther Party in 1968. He was a proud insurrectionist, too. That’s when the Black Panthers were armed and in 1967 stormed the state Capitol in Sacramento.

But the tables have turned for Thompson and many other elected Democrats. Now he has his sights on Trump and MAGA leaders – and imputed them with their own radical notions. He’s now in charge of defining rebellions and punishing them.

In 1971, FBI agents and the Jackson police raided a home where RNA members were holed up. Law enforcement was met with gunfire, which killed one officer and wounded a second officer and an FBI agent.

The FBI served a warrant. They gave those in the house 75 seconds to surrender peacefully. The tear gas was fired. Firing commenced from inside the house.

The shootout made national headlines. Thompson came to the defense of the group.

While some black leaders urged an easing of tensions, Thompson’s new group was more assertive, blaming police for the RNA’s problems. At a press conference, a speaker next to Thompson claimed that police were “out to kill some niggers,” the AP reported.

A separate newspaper article in the Times-Picayune included a more complete quote. “This ‘kill some niggers’ attitude more than anything else is responsible for the policeman’s death,” a speaker alleged at the event where Thompson was featured.

A March 1969 FBI memo described RNA as a “black extremist, separatist organization whose purpose is the formation of a black nation within the United States and a black army to defend [that nation] and attack its enemies.”

A year earlier, FBI informants who attended the RNA’s organizing meeting in Detroit reported it was an offshoot of Malcom X’s black nationalism movement that aspired “to form a ‘Black Government or Black Nation’ that would negotiate with the United States for several southern states in return for domestic tranquility.”

“The delegates to this conference signed a Declaration of Independence disavowing their United States citizenship and they chose as the name of the new Black nation ‘The Republic of New Africa,’” the memo added.

The FBI was deeply concerned, the memo said, that delegates of the group called for “guerrilla warfare against the United States and indicate that plans were being formulated to send Negroes out of the United States to be trained and equipped with the latest weapons.”

“Guerrilla warfare against the United States”?

Sounds like a real insurrection. But Bennie Thompson would rather not talk about that time. These times are different – though none of the protesters at the Capitol was known to be armed let alone shot at law enforcement.

It’s amazing how 50 years makes such a difference – isn’t it?

Meanwhile, there are dozens of MAGA members being held in solitary confinement and many others awaiting outrageous charges for what is being characterized as the worst event since “the Civil War” or compared to 9/11!

What the hell is going on here?