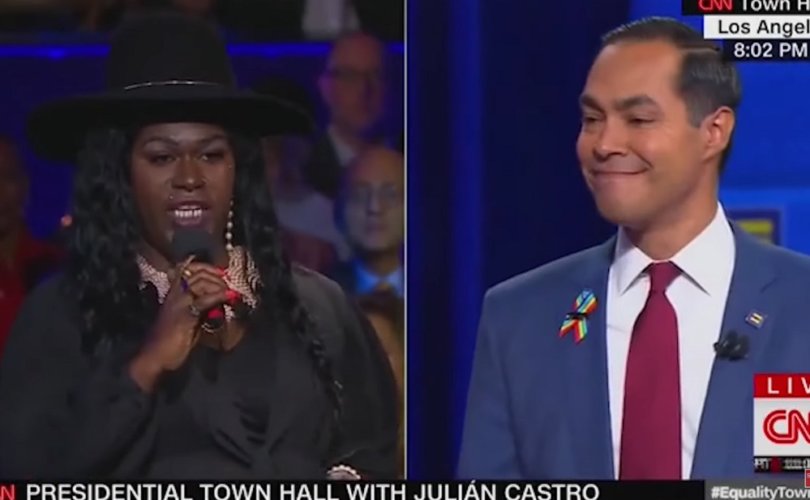 Presidential candidate Julián Castro converses with a man who calls himself a woman.TheDC Shorts / YouTube

October 11, 2019 (The Bridgehead) — So CNN held their LGBTQ Town Hall last night for the 2020 Democratic presidential candidates, and the rest of us got a good look at where this country is headed if they manage to retake power (which Trump's bumbling seems to be abetting at the moment). Many conservative commentators are trumpeting the fact that the Democrats let their mask slip and will consequently turn off many voters, but I think we may have just gotten a clear glimpse of the future. Maybe not in 2020, but someday soon — and perhaps sooner than we think.

The sheer grovelling of both the CNN hosts and the Democratic candidates, combined with an obviously desperate desire to please and faux sincerity that occasionally triggered applause when the audience approved of their performance, was genuinely nauseating to watch at times. In many cases, the candidates brought themselves to tears — although they and the hosts took so much chastisement from the triumphalist LGBTQ activists grilling them that perhaps the tears were nearer the surface than they had anticipated.

Kamala Harris, for example, walked out and announced to Chris Cuomo that “My pronouns are she, her, and hers.” Even Cuomo didn't know what to say, and cracked a joke that in today's media climate counts as blasphemy: “Me, too.” Realizing his faux pas, he promptly took to Twitter to beg forgiveness: “PLEASE READ: When Sen. Harris said her pronouns she her and her's, I said mine too. I should not have. I apologize. I am an ally of the LGBTQ community, and I am sorry because I am committed to helping us achieve equality.” In other words: Please don't cancel me! I promise I'll do better!

One transgender person actually grabbed the mic away from a questioner and started screaming that CNN was aiding and abetting the murder of trans people by “erasing” “trans people of color,” and promptly received wild applause from the crowd. Don Lemon thanked the protestor for the disturbance and gave her the mic while Beto stood there with the most understanding and sanctimonious face he could muster. When another CNN host brought in “Shea Diamond,” Diamond recoiled, proving that you can never be woke enough to please those who wield the power: “It's She-ah Diamond. Put that on record. Yes, honey, it's violence to misgender or to alter the name of a trans person, so let's always get that right first.” As it turns out, you can even commit accidental violence at a CNN LGBTQ Town Hall. With that in mind, who is safe? Who cannot be convicted of “violence” under this definition and under a regime where these people run the show?

Beto hurried to assure the crowd that under an imaginary Beto presidency, religious institutions — including churches — who maintained the traditional position of all three major monogamous religions (and other faiths to boot) would lose tax-exempt status, a policy that would deal a crippling blow to an enormous number of religious organizations. Beto was simply verbalizing what LGBTQ activists have been demanding for some time — and with his announcement, he shifted the Overton Window for the Left by making it acceptable to begin openly musing about the idea. This will become mainstream on the progressive Left, and soon. After all, their reasons to reject the idea are not principled, but strategic. It is a waiting game, nothing more. Churches would do well to begin preparing for this.

In one night, the Democratic candidates revealed who the new masters of their party really are, and there was almost nothing they were not willing to promise. Amy Klobuchar told a person identifying as “non-binary” — neither male nor female — that she would recognize a third gender marker on ID at a federal level (without explaining how she could sleep at night discriminating against the dozens of other genders). A mother who brought her 9-year-old transgender child to the Town Hall beamed exuberantly as the crowd cheered wildly and Elizabeth Warren fell all over herself to show her approval of all of this. Later, Warren promised she would support federal funding for prisoners who wanted a sex change.

It was Warren, interestingly, who was the most brazen in showcasing the contempt this pack of presidential hopefuls feels for Christians and others who still hold to the traditional understanding of marriage. “Let's say you're on the campaign trail and a supporter approaches you and says, 'Senator, I am old-fashioned and my faith teaches me that marriage is between one man and one woman', what is your response?” a CNN host asked her. Warren was ready. “Well, I'm going to assume it's a guy who says that. And I'm going to say to just marry one woman, I'm cool with that — assuming you can find one,” Warren said to loud cheers and applause from the crowd.

Get it? Only rubes, idiots, and incels could possibly believe what nearly everybody believed prior to the year 2000, including Obama, the Clintons, and nearly every other Democrat. These people pretend to want to persuade Middle America to join them on their runaway rainbow train, but that's only because they don't have power yet. Already, they're committing to things that they would have denied under oath a very, very short time ago. The cultural ground is shifting under our feet, and the Democrats have now openly declared their allegiance. Sure, most of us suspected they were headed in this direction. But now, they've told us that they're already there — and they're going to cripple churches, mock Christians, and impose their agenda on us by every means they have available to them to drag us along with them.

And if their political prospects begin to surge, they may soon have precisely what they need to do so.